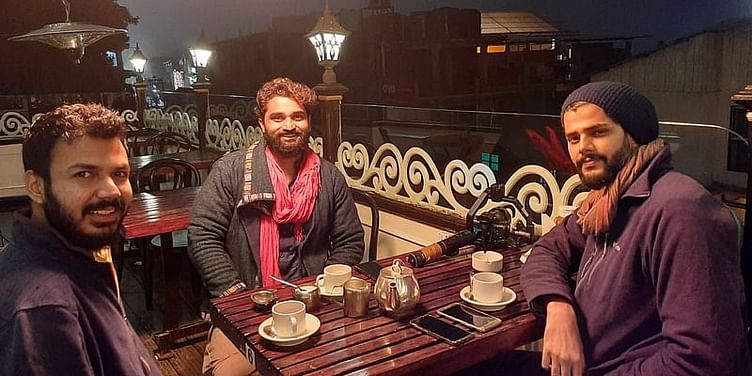 Trekmunk is a Delhi-NCR based bootstrapped startup. Apart from regular treks, it hosts trail cleaning treks and escorts doctors to high altitudes to treat the less fortunate.

After leading a busy life as an investment banker, Oshank Soni decided to take some time off and get away from the daily hustle-bustle. So one fateful day in 2014, he packed his bags and booked a flight to Kolkata. The short trip to Kolkata transformed into a road trip across Sikkim, Gangtok, and Darjeeling.

This turned into a trek to the Goechala summit, which was an eye-opening experience for Oshank. “Barely making it alive in my jeans and a torn windcheater jacket, that was the moment I actually felt alive. After returning from the trip, I couldn’t settle for anything less. I applied for a job in a trekking organisation and packed my bags for Rishikesh,” says Oshank.

This experience led him to start ﻿Trekmunk﻿ along with Harshit Patel and Mohit Goswami in 2016. Apart from organising treks to deeper parts of the Himalayas, the startup also hosts trail cleaning treks and escorts doctors to high altitudes to treat the less fortunate. These are doctors, who are part of the region, can reach higher altitudes and help people in the area who have limited access to healthcare facilities.

It is also working towards going paperless and is in talks with numerous NGOs to collaborate towards societal progress.

While Oshank found the true joy of wilderness and travel much later in life, Harshit had been a passionate traveller since childhood. Following his father on his journeys, Harshit had started doing solo bike trips from the age of 19.

He was never inclined on making a career in academics and had always dreamt of riding his bike on the mountains and into sunsets.

In September 2014, while riding along the coast of Kerala, Harshit slipped and had a major accident and broke his leg. The doctor said he would never be able to run again. But Harshit’s passion was too deep and the dreams were too high to let a setback change the course of his destiny. He started walking again after a few months and also started running. In a couple of months, he trekked Stok Kangri in Ladakh region in record 46 hours.

After he aced his advanced mountaineering course, he applied for a job in a trekking organisation and then left for Rishikesh.

Mohit, on the other hand, is an IIT Kharagpur alumnus. After working for six companies, he decided to call it quits and booked a ticket to Leh. With zero trekking experience, he did the tough Chadar trek, and after coming back from Ladakh, he applied for a job in a trekking organisation and went to Rishikesh.

“All three of us met at an orientation in Rishikesh and instantly hit it off. We commenced our job as trek leaders and trekked together at some of the most beautiful slopes of Uttarakhand,” says Oshank.

After doing what they assumed was their dream job for four months, they felt the organisation, even though it was a travel company, was same as any corporate company in any of the metro city. The work culture was again deceptive and they all resigned.

Bringing in something different

The trio realised all trekking organisations are highly commercialised, and they wanted to deviate from that path by bringing their audience to deeper parts of the Himalayas. It led them to start Trekmunk in Delhi-NCR in 2016.

“We have a policy of limiting the trekkers through our company and boycotting the most commercialised treks like Kedarkantha Trek, as thousands of people trek on this trail in the season and the essence of trekking is lost. The more important mission is to bring a positive change around us,” says Oshank.

According to the founders, while Trekmunk faced multiple challenges initially, nothing can be compared to the ongoing coronavirus pandemic.

The bootstrapped startup made a turnover of Rs 1 crore in 2019. The 16-member team charges individuals basis the treks.

Oshank says when the trio started the company, their aim was not to make money and they did not have any budget or financial goals.

“Out of three, one person has to stay back to take care of the query and to take feedback and other backend tasks, the other one handled the operations, and the third one lead the batch,” explains Oshank.

From the third year, the team created a database, worked on the website, and started working on SEO and marketing.

The startup has categorised each trek into six difficulty levels. Easy, easy to moderate, moderate, and seasonal. Then there are two more options - fixed departures and customisation.

“In fixed departure, a person can join the batch even if they are coming solo, and there are 16 people in the batch. In customisation, we organise a trek for a group of friends or a family as a private group, irrespective of the number of people,” says Oshank.

The services usually start from basecamp to basecamp (basecamp is the starting and ending point of a trek), but Trekmunk also arranges pick up/transportation for the client to reach to the basecamp.

“One of our ground coordinator stays in touch with the client throughout the period - starting from the booking date till the end of the trek. The ground coordinator will also make sure everything is arranged for the client from pick up drop to any other facility they require. One of our trek leaders will receive our clients at the basecamp,” explains Oshank.

“With the number of COVID cases shooting higher with every passing day, there is no confirmation about when exactly we will be able to travel. Unfortunately, for us, it just spells horror. This is not how we expected our 2020 to begin,” says Oshank.

He explains the team had this elaborate planning and excel sheets for the year. “As we are in an expansion stage, everything involves taking financial risks. We even leased a land in Himachal, but COVID hit and we had to lay off several people,” says Oshank. He explains they have lost the big trekking season of March to September.

“Even after the world recovers from this bizarre virus, travellers will refrain from venturing out immediately. Hence, to make them feel safe, we have come up with a detailed list of plans and actions that we are now putting into execution,” says Oshank.

The team has also issued guidelines to ensure safe treks for the mountain lovers.

“Our top priority is to ensure the health and security of our family, which includes all the trekkers, guides, staff, porters, and luggage carriers. We are planning to give excessive importance to each and every trip so that it can be smoothly conducted even with this pandemic on the loose. We will maintain strict protocols through which a guest can be denied acceptance for a batch if he or she is found not fit for the trek,” explains Oshank.

The startup has also come up with new protocols to be followed by trekkers and the crew during the pandemic. This includes conducting activities outdoors, and not in confined spaces to ensure social distancing.

A health certificate ruling out any symptoms of COVID-19 will be mandatory for every trekker. Apart from keeping sanitisers in the camps, the startup is also ensuring cleaning of equipments and trekking gear. Every crew member/trekker will also be screened for high body temperatures on a daily basis.

In pre-COVID times, the Ministry of Tourism estimates put inbound adventure tourism growing at close to seven percent annually, and domestic adventure tourism growing at 25 percent. There are several startups that are focussed on this space like Tripoto, MakeMyTrip, Yatra, and Cleartrip that are focussed on aggregating and curating different travel experiences.

However, Trekmunk says it focuses on trekking for a cause. The platform claims to have completed over 100 treks and mountaineering expeditions. Also, the startup is on the way to becoming paperless as a lot of paper is used in legal documentation and medical certificates when someone is coming for a trek.

“We are working on an app through which our client can stay in touch with their fellow trekkers and assess all other details of Himalayas, share pictures, and other relevant information,” says Oshank.

Speaking about future plans, Oshank says, “We aim to change the face of trekking in India wherein social responsibilities will be the base of an organisation and non-commercial, virgin, and tailor-made treks are given more importance.”

“We are also working on an alpinist niche where trekkers can go solo (shadowed by a trek leader) who is expected to cook for himself, set up a camp by himself, and carry his stuff by himself. We are also working towards making our operations more environment friendly by removing single use plastic from trek operations,” he adds.