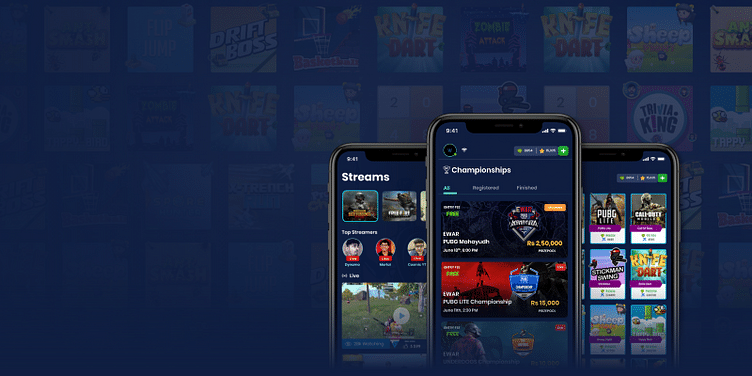 Founded by Parth Chadha and Rahul Singh, EWar Games brings in a stadium-like experience to your mobile. The startup is targeting five million users in the next one year.

Gaming platforms are paving the way for the virtual world to mimic reality. Bengaluru-based ﻿EWar Games﻿, founded by Parth Chadha and Rahul Singh, is a platform for gamers to play with an audience to cheer them along.

"EWar Games is a one-stop solution for gamers who can play games, watch others play, and most importantly earn. Users can play multiple games — from casual games like Candy Jam and Tappy Bird, to hardcore ones like Call of Duty, PUBG, and others. One can play for free or invest money in these games with the intention of earning more," says Parth, Co-founder and CEO of EWar Games.

Hitwicket: this Made in India app seeks to disrupt the global esports and mobile gaming market for an Aatmanirbhar Bharat

Founded in 2019, the startup allows gamers to live-stream their gaming action for ardent fans and regular users, providing a platform for them to build a career.

"Esports franchise and platforms are present globally but have very less presence in India. Usually, Indian players don't get the right opportunities to continue making a career in this field. EWar gives a stage-wise platform to gamers to help go up the ladder in the field of esports," adds Parth.

The idea of starting up

Rahul and Parth met through mutual friends in college. After two years of working for corporates, the duo decided that their love for gaming could help them build a successful business.

"We went into research mode before starting up. Meanwhile, we were working on finance, web, and app development in the organisations. We saw a trend where people were hopping from one game another, from casual to hardcore and serious games. We saw that people were also heavily attracted to fantasy games. It was then that we came up with the idea of EWar," says Parth.

The duo created a one-stop solution for gamers who can opt for games based on their interests, invest money in tournaments to earn more by playing hardcore and serious games — all in one platform. Gamers can watch, play, and earn on the platform in eight vernacular languages.

With internet available at cheaper rates, thanks to the Jio effect, EWar Games is taking advantage of the growing mobile revolution, delivering the app as an APK.

"Everyone in Tier-III, IV, and V areas have access to smartphones and internet, which helped in accelerating the acceptance of this sector in India. People want to spend a considerable amount of time gaming. People even want to start their career as gamers. The COVID-19 pandemic has accelerated the spread of this sector as well," says Parth.

EWar Games believes that brands are keen on advertising inside a gaming platform. The startup is collaborating with brands to showcase products in an innovative model through customised in-game content. By doing so, it ensures that the user experience remains unaffected by pop-ups or adverts.

The startup also hosts tournaments and leagues for companies for corporate engagement. Recently, it hosted the EWar 'Mahayudh'.

"Some of our friends used the app and gave great feedback. We had launched just six casual games in the first version and saw crazy traffic. The first monetary transaction I remember was at a hackathon at Dayanand Sagar Institute of Technology in December 2019. We conducted a PUBG match through our app. That was when people paid money and competed in the match. They even checked out the casual games on the platform. The hackathon had around 30-40 students from various colleges, and most took to our app and became our first customers," recalls Parth.

Why online gaming matters to the digital economy

The founders invested around Rs 10 lakh to start with. Earlier this year, EWar raised $200,000 of equity funding from the angel investment arm of House of Jindals (a Karnataka-based steel magnate with ventures in sports and real estate also) and Jeet Banerjee, Founder of Gameplan, a sports management firm based out of Kolkata.

According to Statista, the gaming industry will be worth $10 billion in the next five years. EWar Games competes with PayTM First Games, ﻿Pacific Gaming﻿, and other platforms in India.

While the founders did not face any challenges in the technology area, retention of users was a problem.

The duo decided to build things around a community, which grew from colleges, and that changed the way EWar retained customers. The other challenge was building the team.

"Getting good and efficient people to become part of your journey and be aligned with you is definitely a big challenge for any startup. But, we managed to attract good talent," says Parth.

The business started with a service fee model, where two people invested a certain amount of money and the winner takes away a major chunk of the money while EWar gets a certain percentage.

Then, the startup expanded horizontally by launching tournaments wherein a price pool is generated, and 60-70 percent is distributed to the winners and the rest goes to EWar. These are the prime models of revenue.

The other revenue model is based on sponsorships. POCO sponsored EWar's Mahayudh tournament in June 2020. The startup also allows advertisements on the platform as a source of revenue.

"We do a bi-weekly research and analysis of our market. I don’t think there was a difficult region. Due to smartphones and increased internet penetration, the Tier IV and V areas are also aware of us. We are running in eight vernacular languages. Hence, there was no difficulty to get people to accept us. We are also building content in these languages," adds the co-founder.