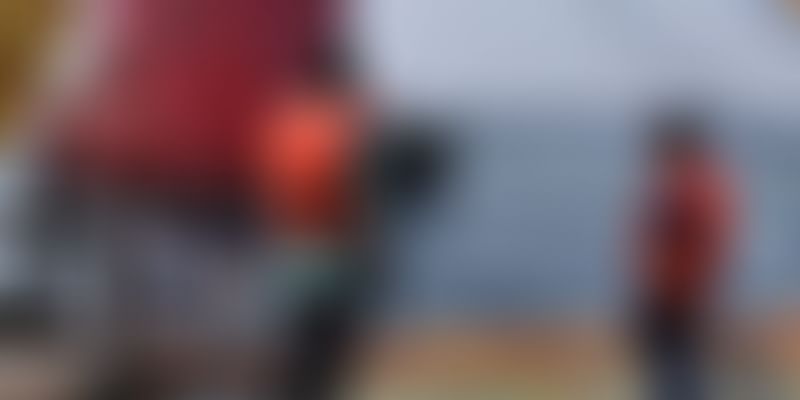 Kochi-based startup EyeROV makes it to YourStory’s Tech30 list for bringing in data-led reporting and ease-of-use in marine inspections with its compact remotely operated drone.

Marine robotics is not ecommerce or entertainment. You don’t hear about it every day. But the critical nature of the industry cannot be undermined.

Experts say that advanced marine technologies can potentially solve large-scale societal and ecological problems of the world. But does India have cutting-edge machinery to scan its vast oceans effectively and safely?

Kochi-based entrepreneur Johns T Mathai asked the same question while working at GreyOrange as a firmware engineer, only to realise that underwater inspection was “way more challenging” than doing it on land or air.

“You have to deal with high water currents, poor visibility, and an overall hostile environment because of wild marine creatures. Then there are restrictions… you can dive only in the day and up to a certain depth, not beyond. So, human divers are at a greater risk.”

Johns believed that a remotely operated vehicle (ROV) could solve these problems for a bunch of industries like shipping, oil and gas, infrastructure and construction, defence and ocean research organisations.

EyeROV origins and what it solves

He roped in his college mate Kannappa Palaniappan P to set up a marine robotics startup, EyeROV, in late 2016. It would go on to build India’s first commercial underwater drone for remote inspection of offshore assets.

While Johns brought in his prior experience of working in robotics, Kannappa had been a project scientist at National Institute of Ocean Technology (of the Government of India), and also held a degree in ocean engineering from IIT Madras.

“He would regularly travel to the seas and witness the problems encountered by ships and other offshore structures,” Johns says of his co-founder.

Besides the hardware, EyeROV has also developed a data analytics and visualisation platform to share comprehensive reports of underwater surveys conducted by its clients. The intuitive platform is powered by AI and machine learning, and enables quicker and more effective decision making for owners of underwater assets.

EyeROV finds a mention in YourStory’s Tech30 list for bringing in data-led reporting in marine operations with its compact, easily manoeuvrable, and operationally safe ROV drone that is entirely built in-house.

The device is economical, multi-functional, and fully digital, and can potentially bring about behavioural shifts in the field of underwater inspection.

It works up to a depth of 200 metres, and can be controlled remotely using a laptop or a joystick. A full-HD camera is fitted on to the drone that captures a video feed of the underwater environment, and works effectively even in low-light conditions. The videos can be further enhanced by up to 30 percent using advanced imaging technologies.

EyeROV Tuna is priced at Rs 18 lakh and has gone on sale on Government e-Marketplace (GeM). The startup looks to gross revenues of Rs 5 crore by 2023.

“We plan to partner with a few inspection companies to provide them a complementary and fully digital underwater solution,” Johns says.

The startup owns the end-to-end design patent for the product, while the manufacturing has been outsourced to vendors. Besides drone sales, EyeROV earns RaaS (Robotics as a Service) and PaaS (Platform as a service) fees.

“In RaaS, we do the inspection ourselves and provide the reports to our clients. They are charged only for the inspection service. In PaaS, enterprises pay a monthly subscription fee for the full data analytics solution,” John explains.

Kochi-based EyeROV’s first customer was the Defence Research and Development Organisation (DRDO) under the Ministry of Defence of the government.

Since then, there’s been no looking back for the startup.

The startup is backed by Maker Village Kochi, Kerala Startup Mission, and the India Innovation Growth Programme (IIGP) — an initiative of the Department of Science and Technology (DST).

It is further looking to close a pre-Series A round of $1 million to build out its new product line, enhance the analytics platform, and beef up its 17-member team.

Johns sums up saying, “India has over a 1,000 dams and bridges, but the inspection process is almost 50 years old and the reporting is paper-based. With underwater drones, we’re making inspections better, safer, and quicker.”