Checkmate: How these electronics engineers are marrying tech and chess to revolutionise the board game industry 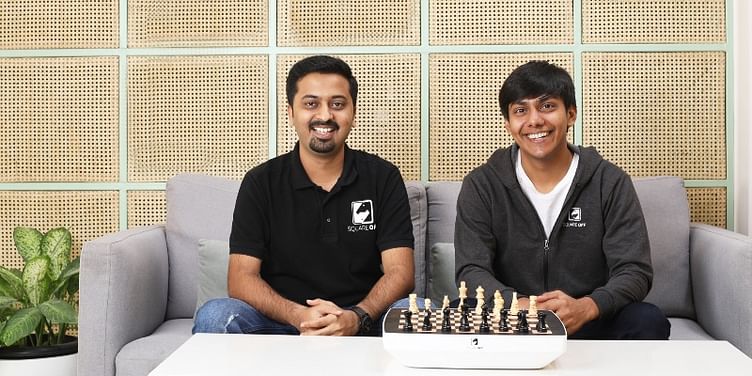 Square Off is a product from Infivention Technology founded in September 2015 in Mumbai. The Square Off Chessboard is an intelligent, connected chessboard powered by AI and controlled through an app where the pieces move on their own.

In 2013, electronics engineers Aatur Mehta and Bhavya Gohil were struck with a unique problem. The Chairperson of the National Association of Blind (NAB) got in touch with them to understand if they could design a chessboard for the visually impaired, to play against AI as it’s not possible for them to play the game on computers and smartphones. It was the Chairperson’s need for a chessboard fo the visually impaired that got the duo to build Square Off.

“As board game lovers, we simply dived in to explore the possibilities. We researched tirelessly to finally arrive at a design. However, we didn’t have any funds. That’s when an idea struck us,” Aatur tells YourStory.

The duo founded Infivention technology in September 2015 based in Mumbai. Their first product is the Square Off Chessboard — an intelligent, connected chessboard powered by AI and controlled through an app where the pieces move on their own.

Square Off Chess, a physical chessboard, is connected to its app (available on Android and iOS) that enables users to play against the board or anyone from across the globe. The opponents do not even need to have the Square Off chess board but just the app. You could be sitting in any part of the globe but can still make the pieces on your Square Off chess board move.

The chessboard is powered by a robotic arm, which is placed under the board and fitted with an electromagnet. The pieces also have electromagnets under their bases. When the move is made on the app, your smartphone sends the signal via Bluetooth to the robotic arm, which then moves under the board taking the designated piece with it. In essence, your opponent's move on the app gets imitated on your board.

When the opponent makes their move on the app, one can see it playing out on the Square Off board with the selected piece gliding through the board.

The duo, however, needed money to build the product. They started participating in various technical paper presentations and national level tech competitions to earn prize money, just to create the prototype.

“Gradually we gathered sufficient money to design our first prototype in 2014. And, it worked. The Chairman of NAB who was visually impaired himself tested the prototype and loved playing on it. We showcased it at many national exhibitions and received a great response,” says Aatur.

They created four more prototypes and visited several events to get as much feedback as possible, as they were more board game lovers than chess players. It was important to understand the features that would really excite a chess player.

“We were invited to showcase the prototype at all the IITs in India, then at MIT Boston FAB 11, Startup Istanbul and the Sharjah Chess Club. After three years of sustained efforts, our beta product was ready in May 2016. To test the product and gauge the response, we produced a small batch of Collector’s Edition Square Off boards and sold 20 specially created highly premium boards within no time,” says Aatur.

The next step was to work out the mechanics of large-scale production. The aim was clear: get the best price without compromising on the quality of the board. However, the challenge was to find a manufacturer that would offer a combination of technology and luxury. In other words, advanced software and hardware perfectly encased in a premium wooden surface.

[Startup Bharat] How Ahmedabad-based Lendingkart was able to reach 53,000 loans in a year

Getting the manufacturing and sales off ground

“In the end of July 2016, we visited Shenzhen, China to explore manufacturing possibilities. Shenzhen, being the electronics hub of the world, offered the technical expertise we were looking for without much trouble. But, finding a dealer in wood wasn’t that easy. After a lot of research, we, fortunately, stumbled upon a dealer who could supply the desired quality of wood,” says Aatur.

In November 2016, their persistence finally paid off when they managed to raise 2,000 pre-orders along with a fundraising amount of $535,000 through a US-based crowdfunding campaign.

At present, Square Off is collecting orders via its website along with Amazon. Square Off also has its presence in big retail stores like Best Buy, Sharaf DG Dubai, and B8ta stores in the US.

Square Off has sold more than 25,000 boards, clocked over $7 million in revenue, and raised $1.6 million in equity funding from investors like Kstart Capital, India Quotient, and RB Capital. It was awarded the CES 2017, Innovation Award - CES 2018, and Innovative product - Indiegogo 2018.

Aatur adds that Square Off board users’ average stickiness quotient is around is 26.17 percent. The highest engaging games (all categories) are above the 25 percent level. He adds they aim to cross 30 percent by the end of 2020.

The revenues are generated through the sale of products and in-app purchases. They also plan to launch a subscription model for their AI-based chess coach, Viktor.

This Y Combinator startup aims to be the Zoom alternative for all Indian startups, SMEs

According to Value Market Research, the global market for board games is at $4.6 billion. Startups in the space include the online marketplace - Bored Game Company, Boardway, and Boardgamegeek. However, these don’t focus much on the creative space.

The duo’s vision is to enable connected gaming over a single board. To this end, they have built Square Off Neo, a lighter, compact, and economical product. It offers silent movements and precision mechanics; is packed with features, has smooth contours and a cooler design. And yes, it does not need you to press down on the pieces. It will be priced at $199.

“With a vision to revolutionise board-gaming, we gave created a product that will change the way people think about board games. The SwapBoard, along with all the upgrades of Square Off Neo, features multiple games that you can swap between, on the same checkered surface. With the SwapBoard, we are bringing board-gaming back like never before - with globally connected gameplay, a sleek & modern design, and a selection of games,” says Aatur.

To begin with, SwapBoard will be launched with four games, Chess, Checkers, 4 in a row and Halma. It will be followed by four more games in a time span of six months post-delivery. It will support Blitz Chess, which is the most popular form of chess in the community.

“We aim to create a patented technology platform, which can be licensed to board gaming companies, open-source users and brands to create their own games and concepts,” he adds. The team is now looking to bring Square off Neo to the market, SWAP, a multiplayer board game and Ghost, a professional e-chessboard.”

They also are adding Square Off ‘Viktor’, an edtech platform to the whole mix. Projecting a multi-dimensional approach of teaching (audio-video, tactile, board, internet) via the app, the team is creating Smart Piano, (a learning tool for kids), and Swap X, an interchangeable surface gaming platform, with patented square technology, which can be also used for licensing.