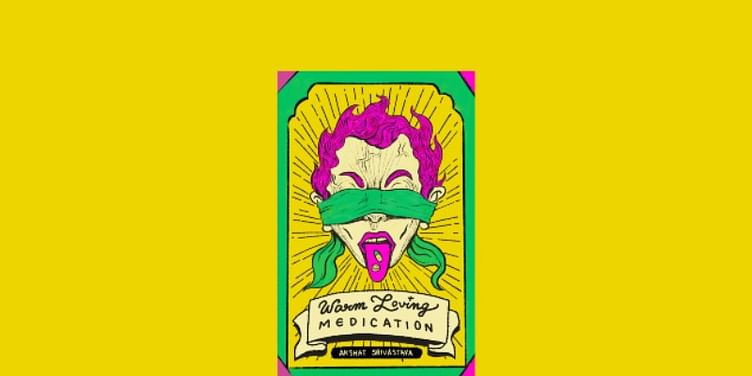 Author Akshat Srivastava tells us more about his debut novel, why he feels everyone needs some Warm Loving Medication, and what comes next.

A sure sign that you have Doomsday Syndrome is if you believe it’s never a matter of if things will go wrong; it’s a matter of when.

Abeer had it and didn’t know what to do. Following the suicide of an acquaintance, he was purposeless, directionless, and lost. His beautiful city had nothing to offer him till a chance meeting with a woman meant life would never be the same again.

That, in a nutshell, is the premise of Akshat Srivastava’s first novel, Warm Loving Medication.

Akshat, 24, is a resident of Delhi and has done his bachelor’s in technology from Thapar University, Patiala. Presently working as an analyst in a marketing firm, he says he never had plans to write.

And he decided to write a novel that is about “the unaddressed evil lurking around our society”.

Akshat says a chance meeting with an amazing acquaintance moved him so much that he was tempted to write. He drew inspiration from many real-life characters and experiences, stating that he was never satisfied with only work.

“I’ve had held different jobs even one at The Pianoman Jazz Club as their Procurement Head. I have always written and volunteered at places in my free time. Work is just a way to continue living a good life. It isn’t a big aspect of my life and certainly not something I’ve identified myself with,” he says.

In this conversation, Akshat tells YourStory more about his debut novel, what it means to him, and why he feels everyone needs some Warm Loving Medication.

﻿YourStory Media﻿[YS]: Tell us about the role books play in your life.

Akshat Srivastava [AS]: I’ve always felt books are a testament to what has been and what could be. Books have given me pleasure because they make me feel like everything I see around me or within me has happened before and will continue to be so. It’s the same with songs or cinema. Good stories are always beautifully empathetic.

But I haven’t always been a reader. I think I picked up my first fiction novel after I finished school. It was The Godfather by Mario Puzo.

YS: Is this your first book? How did it come about?

AS: Warm Loving Medication just happened. I never thought that I would write a fiction novel. It came about as a series of short stories written by me after seeing people around me struggle and suffer.

Later, I found that I had so much to express about myself too. I took my own stories, along with some of my acquaintances, and wrote chapter after chapter.

It was a troubling time as a friend had recently taken her own life. She used to be on anti-depressants which were worsening her condition. This made me curious about the pain and turmoil she faced. The more I explored it, the more I wrote.

The first time I felt I had a novel was when I found a partner who supported me, read my chapters, and gave me notes. In a way, she co-authored it. My family has been really good about letting me follow my heart and expanding my horizons. Travelling and meeting new people helped.

YS: Tell us the theme of your first novel.

AS: It is about the world, seen through the eyes of Abeer, the protagonist who is drifting through life, working and dealing with obstacles one day a time. He has always felt a certain emptiness in his life, but remains optimistic.

He’s trying to work through conflicting emotions after a friend kills herself when he meets a woman on a flight. There’s an energy around Meera; it leads him to strike up a conversation.

Later, they embark on a journey to find themselves and their place in the world around them while trying to live to the fullest. The subtle question of their mental health becomes a part of the equation and their lives go into survival mode.

YS: Did you put in place a writing process?

AS: I did a lot of research. I volunteered in different programmes and talked to many professionals working in the field. After this, journaling was the only way to do it right. There were always so many aspects and details I could have forgotten.

I did not have to think much about building the character of Meera. She was someone I would like being around as a friend or a lover. The friends and families become a part of the story as dramatically and subtly as most people would see in their own lives.

YS: Do are you have any favourite characters in this book?

AS: Every character has its own virtues and complexities so I can’t really choose. It would be like choosing between friends, family, your partner, or yourself.

YS: What does this book mean to you? What do you hope it means to others?

AS: The book means everything to me. I hope it means to others what most books have meant to me. They have made me feel that we are not alone in things we cannot talk about with even our closest of friends.

Not everything is as easy, but I feel most stories just say one thing: Cherish the journey when the destination is uncertain.

YS: How do you see the end you brought your book to?

AS: I just have one word for it: Realistic.

YS: Do you have any favourite authors or Inspirations? Do you see them reflected in your book?

AS: I have many favourite authors. Charles Bukowski and Saadat Hassan Manto are my favourites; I’ve kept their stories in my heart and mind.

YS: How did the coronavirus pandemic impact you and your writing?

AS: The pandemic left me wanting to write less. I could neither go out much nor could I seek new stories. For what it’s worth, I started reading more.

YS: What comes next for you?

AS: I already have a new manuscript - the sequel to Warm Loving Medication – and am looking forward to that.