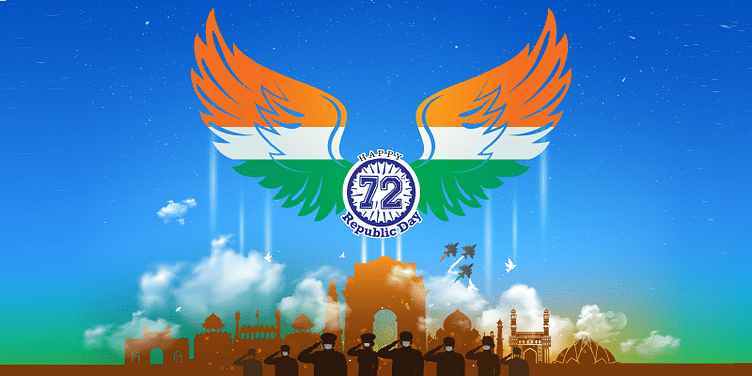 The coronavirus pandemic has pushed the usual grand Republic Day go low-key in this year, and the parade at Rajpath in New Delhi — which is witnessed by more than a lakh people every year live — will be quite different.

Today’s Republic Day will not have the usual grand and boisterous celebration. Every year, thousands of people gather at the India Gate to watch the magnificent parade, which takes months of practice to execute.

But this year, due to the ongoing coronavirus pandemic, things will be a little different. The 72nd Republic Day will have low-key celebrations, and the parade at Rajpath in New Delhi — usually witnessed live by more than a lakh people every year — will be attended by no more than 25,000 people.

The Government of India has also lauched a mobile app called 'Republic Day Parade 2021’ available on both Android and iOS so that you can watch the parade live on your smartphone.

Launched by the Union Ministry of Defence, the app will not just live telecast the order of the parade, tableaux, and performances, but will also give live updates about the route map and parking details for those attending the event in-person.

No awards, and no visitors under 15

All prestigious awards are announced on the eve of Republic Day. However, government officials have confirmed this year’s award winners will not be there at the event. In fact, children below the age of 15 are not even allowed to attend the parade due to safety reasons.

Spectators will be limited to 25,000 compared to 1,20,000 in the previous year. The government has also allowed only 200 media persons to cover the parade as opposed to the usual 300.

The size of marching contingents has been reduced from 144 to 96. The parade is going to be shorter this time and instead of marching up to the Red Fort, it will end at the National Stadium at the C-Hexagon of India Gate. However, the tableaux will go to the Red Fort.

The parade will also highlight the vaccine. A tableau by the Department of Biotechnology (DBT) will showcase the efforts made by the scientists to manufacture the COVID-19 vaccine indigenously. The tableau will depict the various stages of pre-trial and trial phases of the vaccine.

Every year, a distinguished personality from another country is cordially invited to attend the parade on Republic Day. However, this year's parade will not have any international chief guest.

Initially, British Prime Minister Boris Johnson had accepted the invitation but had to cancel later due to COVID-19 and closed borders.

According to reports, this will be the fourth time in history that we will not have an international chief guest at the Republic Day parade. Earlier, the parade did not have a chief guest in 1952, 1953, and 1966.

However, a contingent of the Bangladesh Armed Forces, comprising 122 soldiers, will participate in the parade. Earlier, France (2016) and the UAE (2017) have participated in the parade programme.

The Ministry of Information and Biotechnology will depict the 'Vocal for Local' initiative of the government during the parade.

There will be nine tableaux from ministries, including Ministry of Culture, Ministry of Electronics and IT, Ministry of Ayush, Ministry of Information and Broadcasting: and six from the defence arm, including of IAF, Navy, Indian Naval Coast Guard, two from the DRDO and one from BRO (Border Roads Organisation).

MeitY is gearing up to display its tableau on Digital India and Aatmanirbhar Bharat in which the Ministry will showcase the digital and tech journeys of new India.

The Rafale fighter jets, purchased from France and inducted into the Indian Air Force (IAF) in September last year, will participate in the parade for the first time.

Due to the pandemic, motorcycle stunts — a highlight for the crowd at Republic Day celebrations on the Rajpath — will not be there.

Uttar Pradesh’s tableau will feature a replica of the Ram Temple, which is currently under construction in the temple town of Ayodhya.