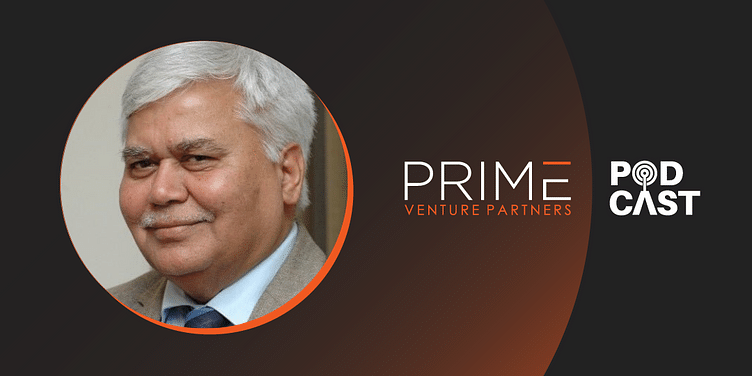 In this episode of Prime Venture Podcast, former TRAI Chairman Ram Sewak Sharma talks about his role as the chairman, the Aadhaar story, and problems they faced.

From being actively involved in the rollout of India’s unique identity project Aadhaar to heading the government’s empowered group on COVID-19 vaccine administration, Ram Sewak Sharma has been in the thick of things.

“It’s very important that you continue to upgrade yourself to learn and be sincere in your approach and behaviour. These are some of the things I have learned in my life,” says Sharma, who was also Chairman of the Telecom Regulatory Authority of India.

That attitude probably explains why Sharma, who completed his Master’s in Mathematics from IIT Kanpur and then joined the Indian Administrative Services, decided to take a two-year sabbatical at the age of 45 to earn another Master’s degree — this time in Computer Science from the University of California.

In this episode of Prime Venture Partners podcast, a series that brings together impactful moments from the lives of entrepreneurs and investors playing a key role in building Digital India, Sharma talks to Sanjay Swami, Managing Partner of Prime Venture Partners, about his journey, the uniqueness of Aadhaar, and the obstacles faced during the project.

Early on while working as District Magistrate in Bihar, Sharma realised that information technology could simplify and accelerate governance. He shares that computers were a new addition at that time and he himself got his first computer in 1985.

“We did some programming because there was no standard language at that time but something called dBase2. I programmed some of their stuff,” he says.

He added that with time, his interest in using technology, programming, computers for governance increased. During his stint as the transport commissioner in Bihar in 1992-94, he began tax collection via online channels.

Later, Sharma joined the Finance Ministry and worked as a joint secretary with the World Bank, among other things.

“I realised that I just had a mathematics degree and I don’t have a computer science degree and I am talking about programming, systems, design and other things. I learned that it’s not fair for me to pontificate on issues which I am not formally qualified on. Since, I had a lot of interest in learning the discipline, so I said, “why don’t I take a sabbatical and do my Master’s in computer science,” he says. Following this, he went on to complete his post-graduation in Computer Science in 2000.

Aadhaar was one of the most ambitious projects taken up by the government for the billion-plus population of India.

“The idea was to actually tell the world that large-scale IT projects in the government, these are some of the lessons which we must learn... The only way we could do that was essentially the biometrics because that’s the only unique feature nature has provided man,” says Sharma.

Conducting the retina scan for this process was difficult as not many were willing to do it and the project lacked the required machines to make it happen. So, the first thing was to structure and undertake the project technologically, recollects Sharma.

“We thought that civil society groups and the NGOs will be our greatest allies as they work for the poor and want to uplift the marginalised. But surprisingly, they were vehemently opposed to us.”

Sharma explained that the obstacles came from everywhere. While some said that it would lead to Bangladeshis getting Indian identity, others said the process was exclusionary, while the third group claimed that Aadhaar will create a surveillance infrastructure. Some also questioned the need to do something which had already been done.

With digitisation over the last 10 years, including GST and the open framework for credit lending, etc, he says people from the startup ecosystem are now seeing big companies like Reliance using Aadhaar and to e-sign subscribers on Jio Platforms. Even smaller companies can now open bank accounts or brokerage accounts with e-KYC, or even just with OTP-based e-KYC.

Talking about the involvement of Aadhaar for entrepreneurs, Sharma says that it provides basic service of authentication. With the creation and verification of ID services, Aadhaar offers a universal and egalitarian approach to identification, which individuals and organisations can use to build for Digital India.