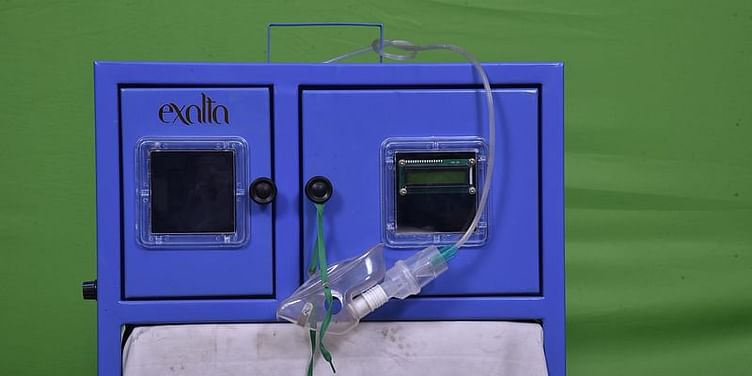 About three to four years ago, renewable energy sector-focused startup ﻿Exalta﻿ had been tinkering around with an innovation called a ‘solar oxygen tree’, a way to produce oxygen using regenerative energy.

When the pandemic hit India last year, several doctors in Exalta’s Founder Ashutosh Verma’s circles contacted him and asked him to come up with a device that, using the right amount of energy, pressure, and other vital details, could produce oxygen.

Little did he know that his invention would prove most useful a year later, during one of the country’s worst healthcare crises ever.

Oxygen saturation levels are an important part of the screening and testing process of COVID-19 patients, and can help detect ‘COVID pneumonia’, a deadly condition, early on. Pulse oxygen readings below 95 percent indicate a lung problem, and below 92 percent to 90 percent may require supplemental oxygen, currently in short supply throughout the country.

Exalta’s mini, portable oxygen concentrator, produced locally in Noida, India, is a handy device that, using water and through the process of electrolysis, produces oxygen. The mini ventilator provides up to eight litres of oxygen per minute, and does not require any special set-up, except for electricity and RO or distilled water.

Medical equipment such as Exalta’s mini oxygen concentrator could help cover some of the oxygen dearth being faced by healthcare organisations, and redirect resources such as oxygen cylinders to those who need it the most.

“Through this device, we aim to serve more and more people during this time of difficulty, and help people in the best possible way we can. Oxygen is the need of the hour, and we’re proud of our product because it is helpful and 100 percent made in India,” Ashutosh tells YourStory.

"Our oxygen concentrators not only gives you cost benefit but also the convenience of not depending on vendors for the supply or filling of oxygen cylinders," he adds.

To date, the company has shipped its devices to Maharashtra, Madhya Pradesh, Delhi, UP, Haryana, Rajasthan, and Gujarat. It has received more than 1,000 orders from North Indian cities alone, Ashutosh says.

To keep up with demand, the company has ramped up its manufacturing capacity of the mini oxygen concentrators, and is now producing 15 to 20 each day. The devices cost between Rs 20,000 and Rs 40,000, depending on how much oxygen they produce.

The company is taking orders directly from individuals, healthcare facilities, and COVID clinics, through its dealers across cities. Individuals can buy the device for their homes too.

Exalta, founded in 2009 by Ashutosh, who is also the company’s data scientist, has produced several renewable energy-based FMCG products, such as electric cycles, bikes, air conditioners, freezers, and water pumps, and is now foraying into the four-wheeler sector.