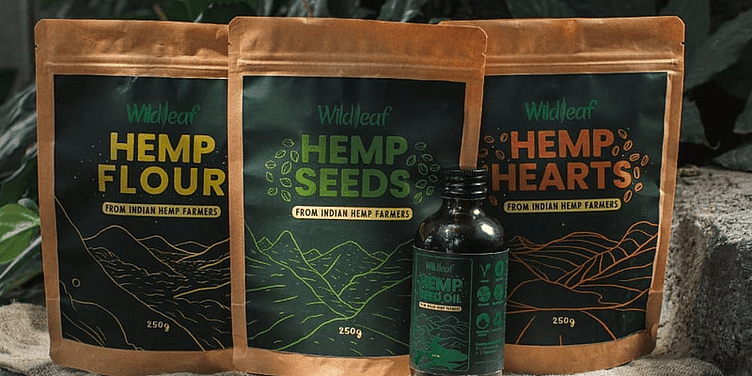 Launched in September 2020 after eight years of R&D, Bengaluru-based Hemp Wildleaf hopes to make hemp products, such as flour, oil and seeds, as widely used in Indian kitchens as mustard oil and rice.

In his formative years, travelling gave Vignesh Murthy a sense of belonging in the world. As an introverted kid, being in the lap of nature’s best was where he could truly unwind —  but as he grew older, that changed. Forests quickly turned into malls and farmlands, and those tall trees were replaced by residential towers.

Vignesh turned to books to try and understand why whatever was happening around him was happening, and how that could be prevented. That was where he read about what would later become his life’s calling: the hemp plant.

Even when he was still ruminating about hemp and its various benefits, the plant kept popping up everywhere —  on Himalayan roadsides, growing wild; in the villages of Himachal Pradesh; in the form of people from across the world who were in the hemp space, or at least advocated the medicinal benefits of the plant highly.

“My spirit to do something for the environment was strong. At the same time, I felt a lot of energy around the hemp plant —  so I realised it must be something I was supposed to do,” Vignesh tells YourStory.

His travels in Himachal Pradesh took on a new form when he started observing how the villagers there used hemp in almost everything they ate — from pickles and flour to roasted hemp hearts and oil.

“The people in the village I was staying at in Himachal Pradesh were honestly the strongest I’ve ever seen. Many 80-year-olds carried 30 to 40 kgs of goods up and down the mountain slopes every day —  and they all credited that to hemp,” he recalls.

Vignesh returned from his trip a changed man and immediately set into motion his plans to launch his own hemp-based brand. In 2016, he established Hemp Wildleaf —  a sustainable, farmer community-focused affordable hemp-based brand.

With Wildleaf, Vignesh aims to make hemp-based products as cheap and easily affordable as any other food grain or flour in the Indian kitchen, which is quite antithetical to what the broader industry trend is where such products are priced quite high.

Vignesh says the reason he decided to price his products at lower-than-industry rates was so everyone —  even a middle-class family —  could give hemp a try without spending too much. With lower prices, he hopes to get hemp into as many kitchens as possible.

“Affordability can help hemp get to a place where it’s as widely used as FMCG kitchen products,” he says, adding this could help people on the other side of the equation —  farmers —  too.

In all its tall glory, hemp is a friend to the environment no other plant has come close to being —  it’s drought-resistant, does not need too much water to grow or deplete the land of nutrition, can tolerate temperature fluctuations fairly well, can be grown all year round, and, most importantly, is full of medicinal goodness.

But in India, parts of the plant are banned under the Narcotic Drugs and Psychotropic Substances Act, 1985 (NDPS) —  only leaves and seeds are allowed to be harvested and sold, and that too only by government agencies. Hemp farming has not taken off in India in a big way because of hard-to-navigate regulations, and whatever is harvested for commercial purposes today comes from plants growing in the wild.

That has been concerning for many Indian hemp product makers who say there’s a lack of quality and pricing control.

Still, with whatever’s available, startups in the space have pressed on, and there have been several proposals to revive hemp farming, especially since it was something that used to be done widely in the country up until a few hundred years ago.

“Hemp can solve India’s three biggest problems: farmer suicides, malnutrition, and unemployment. Removing the hemp and cannabis plants from the NDPS, and the Food Safety and Standards Authority of India (FSSAI) approving it as a food product can help hemp become widely accepted and used for finished products,” Vignesh says.

The startup founder currently sells hemp products directly to consumers via his Instagram page, his newly launched website, and Clubhouse, where he holds interesting discussions with peers in the industry. But what excites him the most is getting hemp into restaurants and cafes, where he sees it being used in baking goods, as superfoods in salads, and as boosters in smoothies, ice-creams and other beverages.

His endeavour to make hemp snacks actually began in 2015 when Wildleaf held a hemp food event at UBCity in Bengaluru. The event was a hit and went viral quickly, with people appreciating the startup’s hemp brownies and cakes. But a week later, the FSSAI banned hemp seeds as a food item.

Still, Vignesh has managed to find progressive, like-minded adopters of hemp who appreciate its omega-3s and omega-6 richness. Wildleaf has already tied up with several cafes in Goa where hemp flour is being used to make chapatis, artisanal breads, pizza bases and more —  and he hopes to bring that to Bengaluru soon.

The startup currently has a handful of products, including Hemp seed oil, flour, hearts and seeds —  but is soon planning to launch soaps, clothing material, hempcrete (hemp-based concrete) and other everyday use items soon.  The FSSAI has been presented with a petition to approve hemp as a food product, and once that happens, Vignesh hopes to sell hemp beer, cheese, wine, etc via Wildleaf too.

Plans to get into the CBD (cannabidiol) space are in motion too, he says.

The startup began selling in September 2020, and has seen a steady 20 percent month-on-month organic growth in sales ever since, even during the lockdown —  and Vignesh says he’s comfortable with that pace since he’s a one-man army (his mom and sister help him routinely), and also because he wants the uptake of hemp to be organic, and not fad-driven.

With hemp and the cannabis plant gaining tractions and followers around the world, the Global Industrial Hemp market size is expected to hit $18.81 billion by 2025, from $3.53 billion in 2019, growing at a CAGR of 32.17 percent, a Valuates Reports stated. The Asia Pacific region is expected to hold the largest share of that market, the report added.