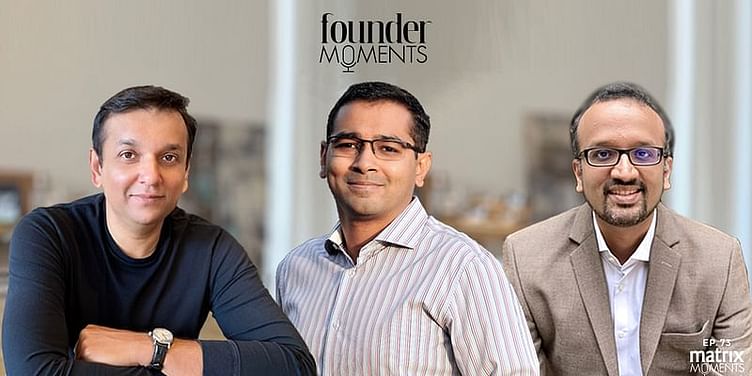 In this episode of Matrix Moments, Vikram Vaidyanathan, Managing Partner, Matrix Partners India, in a conversation with the founders of Protonn, talks about the journey of the startup.

In August last year, Anil Goleti, a key executive at Flipkart who was with the ecommerce giant since 2012, had to step down to pursue his entrepreneurial journey. Along with Mausam Bhatt, former head of Product Management for Google Commerce (Buy on Google), and later was a part of Flipkart, he founded ﻿Protonn﻿.

It is a business-in-a-box platform targeted at individual professionals offering services such as video marketing, scheduling, payments, and CRM amongst others.

“When I went through these backgrounds, I was reminded of how privileged we are to be in business with you because I would say it’s probably the highest achievement background that we’ve invested in. So, the expectations are high. But, first, thank you for allowing us to invest and we’re really excited about the partnership.”

Speaking of how they started up, Anil says the duo met for the first time at the Flipkart Ashford Office. He had just flown in from the US, and had worked in a startup before.

“We were just building out the app and we were a fully-desktop business. Flipkart used to get the peak sales around noon and in the afternoon because people are on their computers, not on mobiles. So, that was my first meeting with Mausam. I was really glad we have someone who is going to be focused on mobile and is going to drive a lot of our growth,” says Anil.

[Matrix Moments] Why network effects are important for any startup

This was the start of the journey. For the next eight years, the duo met quite often at Flipkart where they worked on multiple things, and went through common challenges together. The duo ended up forming deeper bonds.

“A lot of people share successes but when you talk about a lot of common challenges – that’s when you get to know each other even more deeply. The best conversations we had were probably outside the office when we were going to the juice shop on the road in Koramangala or wherever else we went casually,” said Anil.

He added, “In fact, we kept in touch after Mausam moved back and continued to have conversations. I think both of us were wannabe entrepreneurs – talking about how do we start, when do we start, etc. The last meeting that we had was when I was in San Francisco to give a talk at Google Marketing Lab and Mausam was also there giving a talk.”

He said the duo spent the whole week together meeting during the day in the conference, and in the evenings talking about the future and startups. When it comes to starting up, it is about who they have a shared history with, who is thinking along similar lines in terms of building the company for the longer term, and building an impactful business.

Mausam adds they both wanted to do something that scales to millions of users and makes them successful.

“When we look back at our Flipkart journey, I think the most satisfying thing was that we helped hundreds of thousands of sellers be successful in the platform – people who are unemployed, underemployed, and working from home. That was always in the back of our mind so we started looking at spaces where we could influence and help a lot of people find financial freedom,” added Mausum.

The duo looked at fintech, and they looked at ideas that can help people communicate better. They killed a lot of ideas and all this boiled down to Protonn.

“This is something that we feel is going to help a lot of people. I think we’ve done enough of chasing companies and careers and titles, and have been in a good spot. We can now afford to take a step back, have a beginner’s mindset and look for challenges that have a wide global impact. So that was the starting point,” said Mausam.