Independence Day: Here are six homegrown startups that have gone on to leave a global footprint 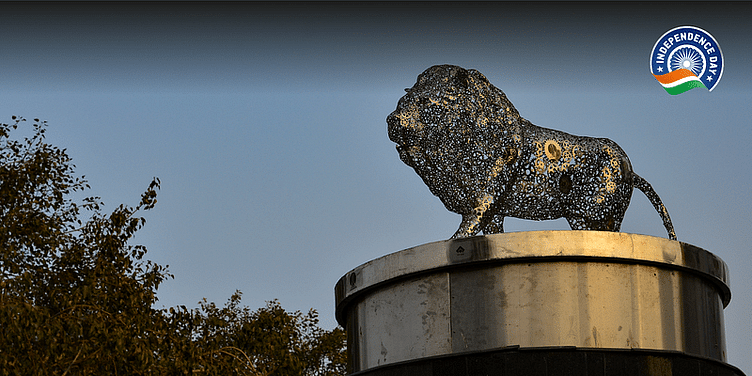 This Independence Day, we bring you stories of homegrown startups, both big and small, across sectors that are going places

Prime Minister Narendra Modi recently held a virtual meeting with the heads of Indian missions and other stakeholders of commerce and the trade sector. The theme for the meeting, as outlined by the PM, was “Local goes global – Make in India for the world”.

While the Indian corporate world has many big names that fall under this category, this Independence Day, we bring you a mixed bag of startups that have emerged from India to cater to the world. From deeptech to gaming to healthtech to IT services, these companies have carved a niche for themselves and are making their presence known globally.

Headquartered in Palo Alto and incubated at IIT Bombay, Cybersecurity startup Safe Security (earlier ﻿Lucideus﻿﻿﻿) allows organisations to take a health check of their existing defences, and understand the likelihood of suffering a major cyberattack. Safe Security was launched in 2012, and was functioning from its headquarters in Delhi until 2019. After raising a Series A funding of $5 million from John Chambers, former chairman and CEO of Cisco Systems in November last year, the company moved to Palo Alto.

The SAFE platform protects multiple Fortune 500 companies and governments around the world with its product. SAFE uses a Supervised Machine Learning engine to give an output both in the form of a Breach Likelihood Score (between 0-5) and the financial risk an organization faces, along with providing prioritised actionable insights based on technical cybersecurity signals, external threat intelligence, and business context of what and where are the "weakest links" across people, process, technology, cybersecurity products, and third parties.

It recently raised $33 million in a funding round led by London-based British Telecom (BT) with participation from its existing investors, including former Chairman and CEO of Cisco Systems John Chambers. With this capital infusion, Safe Security's total funding rose to $50 million.

Saket Modi, Co-founder and CEO, Safe Security said that the startup can be now dubbed as a "soonicorn." With the latest capital, the cybersecurity startup is doubling its engineering team to 200 engineers in India, who work on its pure-play SaaS product SAFE platform.

Chatbots and AI-enabled assistants have taken over brand-consumer interaction in a big way. With increasing number of smartphones, a large section of the online population has access to messaging apps on their phones, and thus prefer to use chatbots to interact with brands at their own convenience rather than get on a call. Rewa in Madhya Pradesh is home to ﻿AxleWeb Technologies﻿﻿﻿, a web development company that helps brands launch chatbots on their Facebook, WhatsApp, Slack, and other social media platforms.

Anshul Shrivastava, 33, launched the startup in June 2019 from his native town Rewa. Besides chatbots, AxleWeb is also dedicated to developing related products like Alexa Skills, Google Home Actions, and other voice platforms.

Anshul says the company has more than 150 clients across the world, and most are from outside of India. He maintains that the company is growing fast, and is seeing a rise of 50 percent in its revenue quarter-on-quarter.

The startup builds custom chatbots, tailor-made for client requirements, and claims that it does not use any template or any bot builder like ManyChat or Chatfuel. “Our chatbots are highly customisable, and our costs are a fraction of what our competitors charge,” says Anshul. His reasoning here is that since the company builds everything in-house from scratch, it can offer solutions at a lower cost than other players in the market.

Anshul also acknowledges that having an office in Rewa saves a lot of operational cost for the company but when he hired engineers initially they thought it was a fake company as nobody could believe that there could be an IT company catering to the world from Rewa. AxleWeb is a bootstrapped company, and Anshul plans to continue this way.

Nilotpal Boruah quit his job at Tata Consultancy Services (TCS) in Gurugram to go for higher studies abroad. Before leaving the country, he went to his hometown in Assam to spend time with his family. During this time, he realised that he wanted to enable his own state to become a technology hub.

In 2015, he launched ﻿TechVariable﻿ along with Utpal Sarmah and Ratnadeep Bhattacharjee to boost the tech ecosystem in Northeast India. The startup provides tech-based solutions to its clients, especially product development.

Nilotpal says the first client was a bus service provider in Guwahati who wanted a digital ticket booking platform like redBus. “It is Northeast India’s oldest and biggest private travel and tourism firm, and we are still working with them,” says Nilotpal. By March 2016, Nilotpal and Ratnadeep set up a small office in Guwahati, and a third co-founder, Utpal, who is Nilotpal’s friend from college and former colleague, joined TechVariable. Since then, there has been no looking back.

Along with helping local businesses to bridge the digital gaps, TechVariable also works with companies across the US, Europe, Southeast Asia, and Australia. Some of its clients include KPISOFT, Samkhya, Director Intel, Medpiper, PLM365, and Network Travels.

What started as a small entrepreneurial venture is now a profitable bootstrapped global company catering to clients across the world with a team of 30 people.

“We are the only end-to-end software services company from Assam, and we have the best of talents. This year, we are planning to recruit eight more engineers, and we will continue to work in tech product development, digital transformation projects, and in cutting edge technologies like machine learning,” says Nilotpal.

From Bareilly to Baghdad: Tattvan

Back in 2008, Ayush Mishra met with an accident in his hometown Bareilly in Uttar Pradesh. Unable to get the required treatment on time, Ayush realised how broken the healthcare services were back home. He saw a huge gap in the healthcare segment and how small towns are underserved as compared to metro cities.

With a desire to solve this problem, Ayush, a biotechnology engineer, launched ﻿Tattvan E-Clinic﻿ in 2017. The bootstrapped healthtech startup uses telemedicine to connect doctors and specialists from reputed hospitals in big cities with people in underserved or remote areas. Patients can visit Tattvan’s E-Clinic, which are manned by medical staff, nearest to them, discuss their symptoms with a doctor through video conferencing, and get the required treatment.

Tattvans’ first e-clinic was opened in Bareilly in July 2018, and since then it has opened 65 e-clinics in places like Kashipur, Pilibhit, Rudrapur, Dehradun, and other Tier II, Tier III cities and rural areas of Uttar Pradesh, Rajasthan, Bihar, Jharkhand, Telangana, and Maharashtra. Tattavan has also expanded globally, and its first overseas clinic was opened in Kabul, Afghanistan.

From Bareilly to Baghdad, Tattvan is using telemedicine to connect doctors and patients

Ayush says the startup is making consistent and persistent efforts to bridge the gap between the rural and urban healthcare systems due to the skewed patient-to-doctor ratio.

“We will continue putting in our best to deliver high-end and timely healthcare facilities in remote areas and to achieve our target of setting up more than 500 telemedicine centres in small towns and villages across India,” he added.

Mobile gaming is a globally growing market, and Bengaluru-based ﻿Gameberry Labs﻿ is taking games built in India to global users. Started in 2017 by IIT-KGP alumni Afsar Ahmad and Govind Agarwal, Gameberry Labs began its journey with online ludo game (Ludo Star) because the “digital form was satisfying and socially rich”, according to the founders.

Ludo Star resonated with people in Pakistan. The game topped charts and stayed the #1 app across categories for months. Soon, even Saudi Arabia got hooked to Ludo Star, and Ludo Star gained 250,000 daily active users (DAUs) within three months of its launch.

Around the same time, Gameberry Labs also started developing Parchisi Star, another board game and a slightly modified version of Ludo Star that was deeply rooted in Spanish culture.

By December 2017, Parchisi Star had garnered one million DAUs almost organically. Over 70 percent of this came from Spain. It also attracted players from Morocco, Colombia, Mexico, and Dominican Republic — countries that had a similar connection with Parchisi like India did with Ludo.

By March 2020, Gameberry Labs crossed 2.2 million DAUs across its two games, with a significant chunk of users coming from Pakistan, Bangladesh, Middle East, and Europe. And then, the pandemic happened. “It was the third milestone,” says the founder. As the pandemic compelled people to stay indoors, drying up most avenues of recreation, they turned to social gaming in a big way.

In April 2020, Gameberry Labs’ DAUs peaked at 15 million. Even though the DAUs have come down with the lifting of lockdowns, Ludo Star and Parchisi Star are seeing six million DAUs from 15 countries. Pakistan, Bangladesh, and MENA contribute 90 percent to the user base, while India’s share is 10 percent. The top DAU markets are Colombia, Morocco, and Saudi Arabia.

Ludo Star has been the second-highest revenue-generating ludo game, according to App Magic.

Gameberry Labs remains bootstrapped and cash-positive, and has “no fundraising plans in the near future”. It is projecting a turnover of $50 million by the end of 2022.

Two Jharkhand-based childhood friends Krishna Kumar and Kunal Prasad decided to solve a social problem, and that led to Bengaluru-based CropIn, one of the most prominent agritech startups from India.

CropIn Technologies, an AI and data-led agritech startup was launched in 2010 by first-time entrepreneurs Krishna Kumar, Kunal Prasad, and Chittaranjan Jena (who left the company in 2019.

With a vision to maximise per acre value and the mission to make every farm traceable, CropIn adds value to agri-businesses by increasing efficiency, scaling productivity, and strengthening sustainability. CropIn has digitised over 6.1 million acres of farmland, enriched the lives of nearly 2.1 million farmers & managing 9,400 crop varieties in over 52 countries.

In March this year, ﻿CropIn﻿ opened its first international office in Amsterdam. In India, CropIn has offices in Bengaluru, Mumbai, and New Delhi. Their platform has been effectively deployed in 52 countries across the globe and aims to raise its tally to 65 soon. Earlier this year, CropIn raised US$ 20 million in Series C funding round led by ABC World Asia to advance the reach of its farm management and predictive analytic solutions.