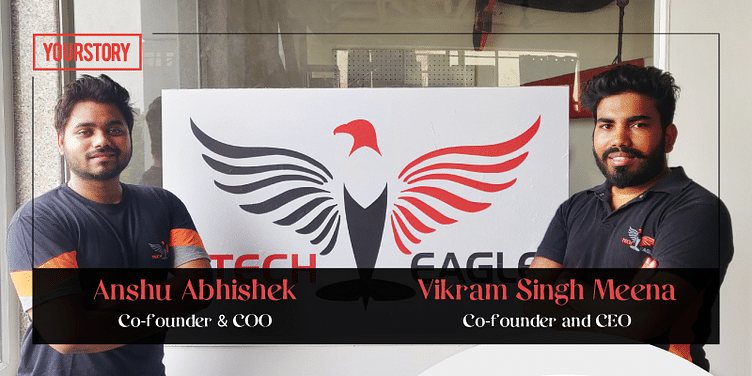 The startup will use the funding to further launch new indigenous products, scale its operations in India, and hire across functions. With its on-demand drone delivery airline, the startup aims to impact a billion lives by 2030.

The Gurugram-based drone AI startup builds end-to-end technology solution for enabling a drone logistics airline for last-mile and mid-mile deliveries. TechEagle has already received approvals from the Government of India (MoCA) and Regulators (DGCA) to conduct package delivery BVLOS (Beyond Visual Line of Sight) flights in different parts of India.

IIT-Kanpur alumnus Vikram Singh Meena founded TechEagle in 2015, while he was still a student, with a vision to solve last-mile logistics problems using a drone and AI technology. Later in the journey, Anshu Abhishek joined the company and was promoted as co-founder and COO.

“Standalone in India, every year we lose millions of lives because of non-availability of critical healthcare items like blood, platelet, plasma, anti-venom, vaccines, etc., in remote, rural, and semi urban areas. Aerial routes are shorter in comparison to roads, our drones are super fast with reverse logistics capabilities, hence the delivery of packages would be 4x faster, 2x economical, and 100 percent reliable."

India Accelerator co-founder Mona Singh said, "Our decision to accelerate and invest in TechEagle moves in the direction of helping companies build a global presence. 2022 will be the year in which the hockey-stick upcurve in large scale usage of drones in India will happen, upon the strong foundation of the Drones Rules 2021."

According to Harvinderjit Bhatiya, CEO and Co-founder, Radiowala, and one of the founding members of Vinners (Value Investors Network), with the launch of Drone Rules 2021, the future of TechEagle looks promising.

"The success of the pilot runs have accelerated the possibility of deploying beyond-line-of-sight drones for last-mile delivery of shipments in minimum time to areas with improper road connectivity and faster deliveries in dense urban settings. We found these to be compelling reasons to invest in the company," he added.