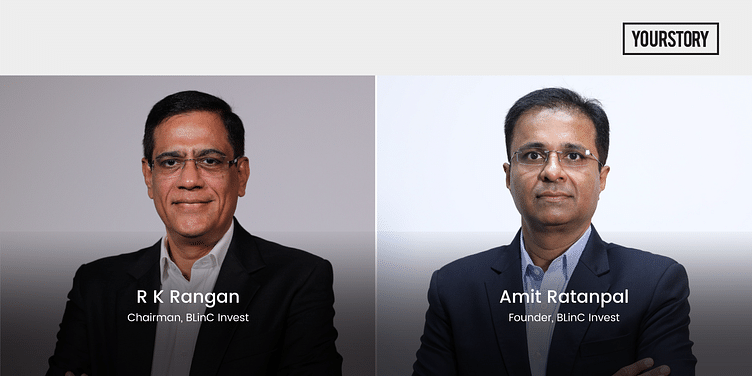 The burgeoning startup ecosystem in India continues to witness the rush of entrepreneurs as well as a new breed of venture capital (VC) firms that are keen to nurture these businesses from an early stage.

One such specialised VC firm is the Mumbai headquartered ﻿BlinC Invest﻿, co-founded in 2014 by Amit Ratanpal. He and partner R K Rangan believe in rolling up their sleeves and working along with startups rather than just writing cheques.

Amit, a career finance professional who was passionate about building new businesses at his previous jobs at ICICI Bank and Birla Sun Life, entered the startup ecosystem in 2008 through the angel investing platform Mumbai Angel Network.

“I saw a very definite trends back in 2008 where it was certain that private equity-venture capital activity is going to increase in India,” says Amit.

This prompted him to be more involved in the startup ecosystem as an investor. He was very clear that the bets that BLinC makes would only be in sectors that have a large market opportunity.

BLinC decided to focus on two segments – edtech and fintech – way back in 2014. This was a time when both these segments weren’t favoured areas for investments as they are today.

“We believe investments should be made in segments which I know very well,” says Amit.

BLinC founders also realised that the global trends were in favour of these two segments. “We cannot time the market but can certainly look at the future direction,” he says.

The company's bets on both segments have been successful as edtech and fintech have not only shown resilience in meeting the challenges of the Covid-19 pandemic but even seem to be riding the post-pandemic wave.

For Amit, the firm’s investments were more focussed on the impact that the startup would have on the large ecosystem.

“We always look for wide spaces which would have a billion dollar plus market opportunity and there should be an outcome,” says Amit.

For example, in the edtech segment, BLinC realised that focus on areas such as upskilling and other niche services like educational finance would pay them rich dividends.

Similarly, in the fintech area, it is looking at segments such as insurance as an area to invest.

Given this background, BLinC always looks at startups whose founders are extremely passionate but are also flexible in their approach.

“We are very hands on and take a co-founder approach in our investments,” says Amit.

He further elaborates that during investment, the VC firm gets involved across the board – strategy, business development, fundraise, technology, or operations. Amit cites an example where a young startup, earning Rs 1-2 crore of annual revenue, may not require a CFO but needs someone who thinks like one and it is here that BLinC brings in its expertise.

Amit remarks, “It is not just the question of knowing what to do but also what not to do.”

This has been the year for India, entrepreneurs, VCs, consumers, and enterprises, says Varsha Tagare of Qualcomm Ventures at TechSparks 2021

BLinC typically comes in at the pre-Series A stage of investment where the startup may require about $1-3 million in funding and remains invested for about four to six years.

BLinC Invest has made investments in startups such as Imarticus, Eduvanz, Gennext Students and 1Crowd.

It typically looks at exit when the startup raises its Series C and D funding round. BLinC has already made exits from two of its portfolio firms – Eduvanz and 1Crowd.

“We look at startups which already has a team in place, product ready and certain market traction,” says Amit. “We invest in founders with whom we can relate.”

Given BLinC connections in the investor community of the startup ecosystem, it has been part of around 25 investments, both in terms of using its capital and non-capital resources.

Now, it has formally launched a SEBI (Securities Exchange Board of India) registered fund with a target size of Rs 100 crore and has already garnered around 50 percent of the amount from HNIs as well as family offices in India and overseas.

Through this fund, BLinC is looking to make around 5-7 startup investments. Amit believes there is less competition in their space of investment and it focused on building value rather than valuation.

Amit, who has witnessed a couple of investment cycles, believes that the evolution of the startup ecosystem in India has been transformational. He explains this with a simple example. Earlier, entrepreneurs would hesitate to draw their salaries to have their skin in the game but now founders reap the rewards of their work quite early in the journey.

Amit believes India needs millions of entrepreneurs and businesses emerging from outside of the metros.

BLinC Invest believes in having a concentrated portfolio of investments and Amit says it plans to have a string of small sized funds as part of its future plan.

“We are value builders who work very closely with the founders in handholding them and growing their business,” says Amit.

For Infosys’ Hema Rainaa, building a strong ecosystem of allies is a key success mantra