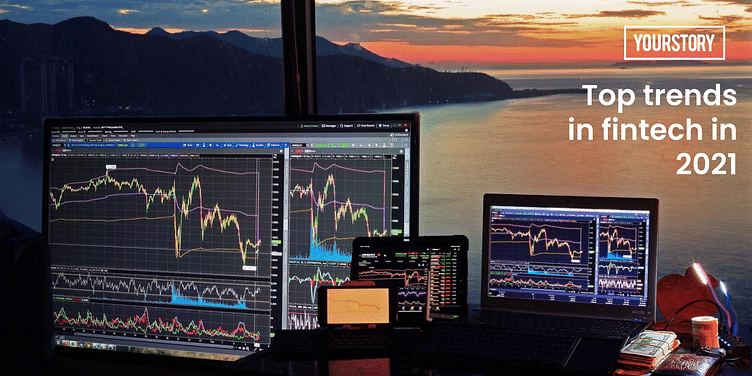 Fintech startups raised a total of $6.39 billion in funding in 2021, till Dec. 10, over 3.5X more than they did last year. As investor interest in the sector continues to hold strong, we look at some of the most defining trends in the space this year.

If 2020 was the year that propelled the usage of fintech startups and led to broader acceptance in India, 2021 was when the industry started showing signs of maturity.

While startups such as ﻿Groww﻿, ﻿Upstox﻿, ﻿Slice﻿, ﻿CRED﻿, ﻿BharatPe﻿, ﻿ACKO Insurance﻿ and Five Star Finance crossed the billion-dollar market valuation mark this year, pack leaders such as ﻿Paytm﻿, and ﻿PolicyBazaar﻿ made their way to the capital markets.

Fintech startups in India drew nearly $2.25 billion in funding in the third quarter, across 70 deals, as per YourStory data. That was far ahead of the total funding the fintech sector in other APAC nations roped in, according to S&P Global.

"Indian fintechs are at an inflection point to leverage digital enablement of users to China-like levels in five years through a robust stack of platforms and rise in ecommerce and digital transactions,” Jefferies said in a note.

“Over (the next five years), fintech markets in payments, lending, insurtech, wealthtech, and neobanking could ramp up 3-15x,” the note added.

But even beyond enabling digital payments and helping people buy insurance online, the new crop of companies that have taken up the mantle to disrupt consumer and business finance over the past nine months is quite telling of how digital users in India are not only actively eschewing archaic financial practices and processes, but coming into their own as far as using all the tools available to them to exert their financial autonomy goes.

Here’s a rundown of a few trends in the fintech space in 2021 that are emblematic of the ecosystem hitting maturity:

The sector sent the most number of startups to the unicorn club this year. ﻿Digit Insurance﻿, CRED, Five Star Finance, Groww, ﻿Zeta﻿, BharatPe, Mobikwik, Acko, Upstox, and Slice – all raised funding in the year and were valued at over a billion dollars.

Funding remained strong across stages in the period.

While last year, early-stage funding slowed against the backdrop of the COVID-19 crisis, the momentum returned this year. As many as 145 early-stage fintech startups raised a total of $735.3 million in funding till December 10, 2021, versus 74 startups that raised $254.9 million in the comparable period last year.

“As the traditional sector plays catch-up with the more agile and innovative startups of the fintech sector, Indian fintech companies have a chance to reshape the financial services landscape in the country,” wrote Pramod Lamba, Chief Customer Experience Officer at Valyu.ai.

“Fintech has already altered the market forever and shown immense potential to close the gaps in the delivery of financial services to consumers and businesses alike. Ultimately, fintech has emerged as a disruptor, leading the next wave of technology and innovation,” he added.

Fintech innovation is not just happening in metros or Tier II cities; important startups that solve for India are being birthed in places like Ludhiana, Chhattisgarh, Nashik, Nagpur, Patna, and Palakkad.

The proliferation of BNPL in India

Buy Now Pay Later has been an important play mostly for personal lending, as well as business lending startups alike. Apart from the host of ancillary services they offer — such as discounts and cashbacks — BNPL has been an instant hit with consumers in India because it allows people to borrow small amounts of loans, on an as-needed basis, unlike with a personal line of credit from the bank.

Credit cards can fix the ticket size issue, but they have a very low approval rate in India. Not everyone qualifies for a credit card, and even if they do, not everyone applies for one.

BNPL apps make credit available to people when they need it, without having to spend more than five to six minutes on KYC authentication. Even checking out carts using BNPL is as easy as plugging in a Paytm wallet to pay — and with users already used to carrying out these types of digital payments, it becomes easier to digest.

BNPL is an urban consumer product, needs to be universal: Ashneer Grover on launch of BharatPe’s postpe

BNPL has definitely changed Indians’ relationship with credit. As a debt-averse nation, loans, and credit cards are often viewed as gateways to runaway debt. But BNPL models, their generous repayment policies, and their credit limits have worked hard to change people’s perceptions about loans — and that has been reflected in the number of BNPL startups that have germinated in the past year.

According to industry tracker Tracxn, there were 33 BNPL-focused startups in India as of August 2021. More established players are also either completely pivoting to or offering BNPL services on their platforms.

Startups leading the BNPL revolution in India include ﻿LazyPay﻿, which has over 30 million users in India, ﻿Simpl﻿, which saw a 40 percent spike in transactions for daily essentials, ﻿ZestMoney﻿, ﻿ePayLater﻿, and ﻿Capital Float﻿

The BNPL payment ecosystem in India is expected to grow by 65.5 percent on an annual basis to $11.57 billion in 2021, according to a ResearchAndMarkets report.

Adoption of fintech solutions by MSMEs

“The COVID-19 recovery will be digital,” says a McKinsey report from 2020 — a phrase poignant of the world we inhabit today. “Digital transformation” was the term rallied about in 2021 with respect to MSMEs, and the dogma has since been “digitise or die”.

[Product Roadmap] Using tech, how Khatabook made incremental shifts in its product to touch 10 million users

We went a step further during 2021

Take, for example, companies like Paytm or ﻿KhataBook﻿, which have been actively trying to expand their merchants base. Their merchant services bundle — for Paytm, at least, primarily aimed at helping businesses accept digital payments — come with a lot of ancillaries, often complementary products such as digital bookkeeping, inventory management, staff and expense management, GST collection etc.

In an increasingly digital world, merchants have found these services, which they once disregarded and hardly used, valuable in tracking their finances, as well as pinning down areas that could do with improved efficiency. So much so that merchants are actively starting to pay for these services, and are asking for more solutions such as business credit lines based on their digital ‘khatabooks’.

Startups such as Khatabook, ﻿Chqbook﻿, ﻿OkCredit﻿, and ﻿Vyapar App﻿ are leading this space, while international companies like Indonesia-based BukuWarung are taking a leaf out of India’s playbook and providing similar services in Southeast Asia.

In fact, data from the NSDL and CDS show that in the first quarter of FY22, nearly 7.1 million demat accounts were opened, putting us on track for adding 28.4 million new accounts if the current average rate holds up.

COVID-19 has been a big spark plug in this sudden rush to online trading platforms — but we’re now seeing Act II of that story being played out in the fintech space: the dawn of trading strategy platforms.

All said and done, equity markets are hard to gauge even for the most seasoned trader, and retail investors are several notches below in terms of expertise. Trading strategy platforms are solving that problem.

“You’ve opened a demat account, invested in some safe, bellwether blue-chip stocks, but now what? How do you keep making money in the equity market? That’s where trading strategy platforms come in,” says Anand Desai, a 24-year-old IT professional who opened an account on Zerodha last year, and has signed up for strategy services on platforms similar to ﻿Smallcase﻿, ﻿Stratzy﻿, ﻿WealthDesk﻿ etc.

For the bevy of new-age investors like Anand, who signed up for online trading during the lockdowns last year, trading strategy platforms not only help them decide where to invest their money, but also eliminate the hassle of constantly keeping track of daily stock movements and reshuffling portfolios.

The Netflix of stock trading: How RAIN is democratising algo and quant trading for retail investors

“Investing in mutual funds adds value to people who have crores of rupees and earn returns in tens of thousands. Retail investors with a corpus of Rs 1 lakh to Rs 10 lakh will not really see any substantial value addition from investing in mutual funds, even if they remain invested for a longer-term…the returns they earn make a very marginal difference to their net worths,” Harsh Agarwal, an asset manager and hedge fund operator, who recently co-founded algo-trading platform ﻿RAIN Technologies﻿ told YourStory in an interview.

These mini versions of a traditional investment bank where men from fancy colleges in tailored suits call the shots, are providing services that were previously out of reach, financially, for the common man. They’re cost-effective, expert-guided, easy-to-understand, and seek to only maximise profits for investors — all without margin-squeezing commissions, market technicalities, and confusing parlance.

Startups in this space include Smallcase, WealthDesk, RAIN, Stratzy, Scripbox, Pickright, among several others.