Entrepreneurial aspirations are growing, but with consciousness, says Sameer Guglani of Supermorpheus 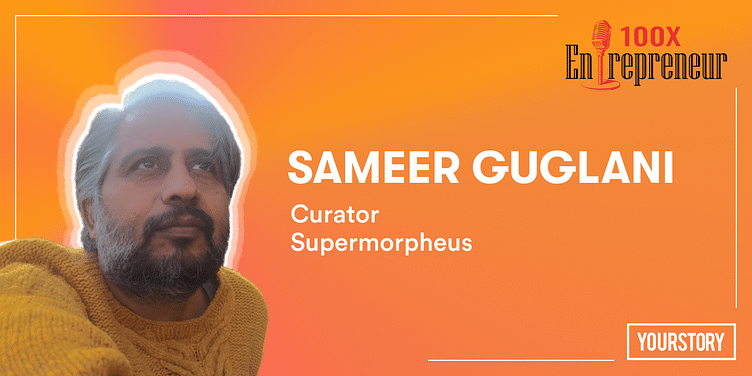 In this week’s 100X Entrepreneur Podcast, Sameer Guglani captures the Indian startup ecosystem’s journey from creating for joy to chasing growth and valuation, and how entrepreneurial aspirations now focus on building and creating wealth with consciousness.

At the turn of the century – and the millennium - Sameer Guglani had only just started exploring the entrepreneurial ecosystem in search of new opportunities because startups were where people were “inventing the future”.

A lot has changed in two decades. India’s startup ecosystem is thriving, but the function of these startups has remained the same.

“I had no experience of actually knowing what it meant but now I know that is actually true. Startups are inventing the future,” says Sameer, who went on to start India’s first startup accelerator Morpheus in 2008.

In 2004, Sameer lived his entrepreneurial dream and, combining his love for movies and startups, co-founded Madhouse, a Netflix-style venture that delivered DVDs to its members.

After a modest exit, Sameer found himself diving further into the startup world through community-based events where a few people got together and talked about startups that had just begun in Bangalore.

“What was happening was that whenever we met founders and discussed their startups, we somehow felt in a very elevated state of consciousness…something was very magical, very expansive versus our jobs where we had big cabins, Rs 50 lakh salary, and a big title that seemed like a jail actually,” he says, painting the picture of India’s startup hub in its nascent stage, in a conversation with Siddhartha Ahluwalia, Founder and Host of ﻿100x Entrepreneur﻿.

This experience became the genesis of Morpheus as it went on to support 82 companies, including ﻿Practo﻿, ﻿Commonfloor﻿, ﻿HackerRank﻿, and AddoDoc, among others and create a community of more than 300 entrepreneurs.

Sameer and his co-founder and wife, Nandini, used to catch up with founders when they travelled to other cities and eventually formed the ‘Morpheus Gang’.

To this day, Sameer feels that Morpheus created a space for founders to share knowledge, shed stress, and have a good time. “Personally, I have some 160 to 200 friends for a lifetime,” he says.

CleverTap’s Anand Jain on the growth of SaaS ecosystem in India, scaling culture over product and capital, and more

Creation versus growth and valuation

However, Morpheus was shut down when Sameer saw that the way startups worked was changing.

Young startups, those where one could not tell the founder apart from the employees as they created breakthroughs, were changing as they reached the next stage of seed funding and further rounds.

“There would be a big office with the founders and employees seated separately and there is certain kind of aggression and certain stress that starts to build up. We saw that in startup after startup transitioning from a very happy and light workplace creating magic into an unhappy and miserable workplace with a focus on growth and valuation without really caring about what was happening to the humans involved. That is when we took a call to shut down the project; we did not want to be part of such an ecosystem,” he says.

Sameer then set out on a journey to “resolve the conflicts within oneself and create a community of oneness”. He began writing a book on conscious business.

In January 2021, he launched ﻿Supermorpheus﻿, a community-based investor model with all deals coming automatically through the community of founders, injecting capital back into the startup ecosystem.

Sameer believes entrepreneurial aspirations are growing to build big businesses and create wealth, but with consciousness.

“We are able to make a three-people team for evaluation of every deal. They are experts from that domain, and we can trust their judgment. And once they recommend the investment to go through, money will come from the fund and the syndicate to do an average deal of $100,000,” Sameer says.

Now, he says, "being able to merge startups and consciousness is a double high".

To know more, listen to the entire episode here: