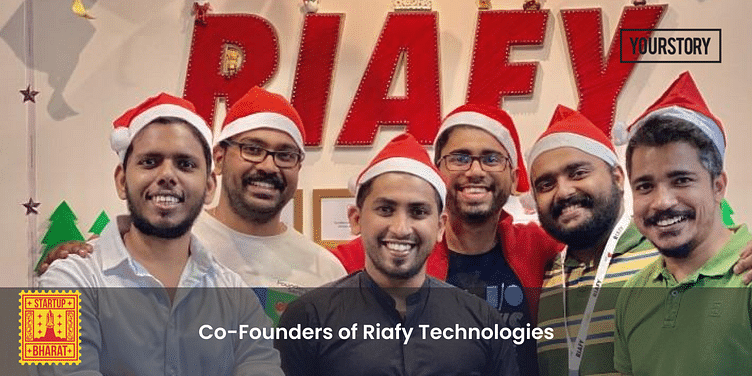 Started in 2013, Kochi-based Riafy Technologies is an AI startup that helps businesses with various AI solutions. It has pivoted from B2C to B2B customers since inception.

With the onset of the COVID-19 pandemic, the world has come to realise that digital is the way forward. Today, every major tech company is dedicating resources to come up with innovation in artificial intelligence (AI). And the number of AI startups too has seen a significant increase in the recent years.

With over ten years of R&D in artificial intelligence, machine learning, and consumer tech, Kochi-based Riafy Technologies claims to have an edge over other AI players globally.

The startup has created its specialisaiton in AI since 2011 and that gives the team a competitive edge over other AI solution providers across the globe.

“When we started, we were still ahead of the times in artificial intelligence. But owing to our years long rigor, we have cracked core capabilities, using completely in-house proprietary AI technology,” says John.

He says, the 100-member team has unlocked numerous incredible milestones in the last eight years. Riafy has previously partnered with Google, Apple, Siemens, and Sony. It was the first Indian developer to be featured at Google I/O consecutively for five years from 2015. The apps business is however not paused and the startup has built an array of consumer apps like cookbook recipe app, daily journal, meditation, book summaries, and so on.

“We are one of the premier app studios in India, with over 40 million users and 27 languages across 160 countries,” says Joseph. He adds that they are now confident to disrupt the B2B space as well.

After completing their engineering, the six childhood friends, with an unquenchable passion for technology, happened to decide to do something in tech together.

Initially, the co-founders started with a freelance project in 2011 to help children increase their reading speed via an app, which would also help them record their typing speed. They used the revenue of Rs 1.5 lakh from this project as Riafy’s seed capital.

“This helped us patent our Relational Intelligence technology soon after and kickstart the company in 2013,” says Joseph.

He shares that back when they first forayed into artificial intelligence, the world was not yet equipped with computational or processing capabilities to adopt AI at scale.

“India was still in the nascent stages of the smartphone era. Owing to this, we decided to put a pin on expanding our AI vision, and instead, focus on building our B2C business. We planned to find subtle use cases for our proprietary AI technology and develop consumer apps on it,” he adds.

In 2013, Riafy created its first mobile app ‘Cookbook Recipes’ powered by its own AI tech in the cooking space, which has garnered around six million users. “Riafy was one of the first companies from India to make an app that works across all customer platforms/devices, countries and languages,” says John.

Riafy was started as a B2C startup building AI apps, but it pivoted to B2B business during the pandemic.

The B2B pivot and Feddy

In 2020, the co-founders decided to refocus on bringing its R&D efforts in AI. Federal Bank was looking to revamp its digital initiatives in the face of COVID-19, and Riafy’s AI platform suited them. Riafy created Feddy, an omnichannel AI banking assistant, which is now the face of Federal Bank.

Feddy can intuitively understand and answer any user queries. Of all customer service requests received by the bank through various channels, 43 percent is currently handled by Feddy, says John. He also shares the startup is working on integrating core transactions into Feddy, which should be live by March 2022.

According to the co-founders, Feddy was recognised as one of the world’s best conversational AI assistants by Google in 2021 among pioneers in the AI industry for its implementation on Google Business Messages.

According to Grand View Research, the global AI market was valued at $62.35 billion in 2020 and is only expected to develop at a compound annual growth rate (CAGR) of 40 percent in the next decade.

Speaking about the competition, Joseph says that even though there are multiple players in the AI industry with experience and funding like LivePerson and [24]7.ai, not all companies have been able to address all three puzzles effectively -- understanding the user’s intent, finding the information required to satisfy this intent, and responding with the answer — like a human brain.

“We have successfully cracked these core capabilities by using our in-house proprietary AI technology,” he adds.

Riafy’s business model is product licensing. It charges an installation cost and a monthly licence fee for its AI products.

“We have tie-ups with multiple business channel partners across the globe to help scale up the business,” says John. Its current clients include Federal Bank and the Government of Kerala.

The CEO also claims that in the BFSI sector, Riafy is in conversation with other banks in India and would be signing contracts before the end of this FY.

From seed capital of Rs 1.5 lakh initially, the startup’s turnover has grown multiple times each year and is seeing an annual turnover of over Rs 5 crore. Riafy turned profitable three years ago. John says that in the year 2020, Riafy’s AI business vertical started with monthly recurring revenue of more than Rs 2 lakh, and currently, its monthly recurring revenue amounts to approximately Rs 20 lakh.

“In the next 12 months, our revenue is forecasted to grow by 12 times and reach more than Rs 2 Crore monthly recurring revenue,” says John.

Funding and plans ahead

The bootstrapped startup is keen to explore strategic investment from its clients as part of its external funding.

“Our business development efforts in the US, Europe, and the Middle East markets are estimated to bring at least seven major clients and 12 projects in the next 12 months,” says Joseph.

Overall, the company is actively looking to focus on its B2B vertical and expand the same into other segments, which includes banking and financial services, government, retail, logistics, education, and hiring, among others.

“Our AI platform is industry-agnostic and can be adapted as an internal AI tool or a customer-facing assistant,” says John.

He adds that Riafy is also investing in its R&D efforts to focus on on-device machine learning to cater to new-age customers’ needs and reduce their operational costs.

“Riafy’s work with Artificial Intelligence will revolutionise the way we interact with technology. It’s sufficient to say that smart and omnipotent AI will soon become integral to our daily lives, much like Iron Man’s J.A.R.V.I.S!” says Joseph.

“In the next 10 years, there is bound to be an AI revolution across the globe and across industries, and Riafy would like to be one of the pioneers of this revolution,” he adds.