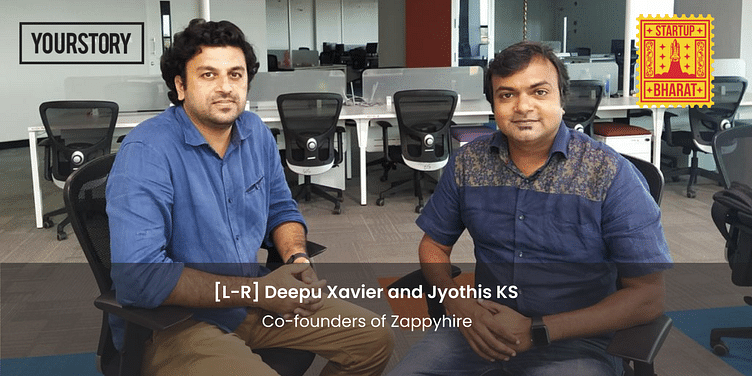 Co-founders, Jyothis KS and Deepu Xavier, refer to Zappyhire as a “Siri-for-recruiters” as the platform suggests the right recommendations for a role based on the historical data of the organisation.

Born at Kerala Startup Mission premises, the startup essentially helps recruiters get a 360-degree view of the candidate to make well-informed decisions. It automates the recruitment process by letting AI (artificial intelligence) take care of the tasks such as scheduling, identifying the right resume from the large corpus, pre-screening sessions including video interviews.

Zappyhire roped its first global client in December 2020 in France, and it now provides services in three regions — Europe, Southeast Asia including Singapore, and India.

Zeroing in on the problem

Jyothis was the first employee of AI-driven chatbot startup, CogniCor, where he faced a lot of challenges in hiring.

For Zappyhire, Jyothis teamed up with Deepu, who was his roommate in Zurich back in 2005 when the duo worked for Infosys.

Besides Infosys, Jyothis and Deepu have worked across the world with multiple companies and faced several recruiting challenges. Jyothis knew that technology can solve these recruiting pain points.

“I was facing challenges in terms of recruitment while scaling the startup, while Deepu was facing similar issues while working at a large company. So despite the size of the organisation, we found the issue or the challenges in the hiring is more or less similar,” says Jyothis.

And, this laid a foundation for Zappyhire. The company bagged its first client, Federal Bank, within six months of its launch. Deepu says the onboarding was a turning point as it validated the idea behind  Zappyhire’s end-to-end hiring platform.

During their research, the duo realised that the HR tech ecosystem had several piecemeal solutions but no single platform that solved recruiters’ problems.

Zappyhire started building a tech platform to integrate various assessment engines to provide a more holistic picture of the candidates. It eventually evolved into a software-as-service (SaaS) platform.

Another key challenge in the recruiting process is English language proficiency. Zappyhire’s AI solves this issue by helping recruiters understand the candidates’ English proficiency levels, which in turn, leads to improved communication.

Explaining why a quick hiring process is crucial, Deepu tells that the company’s survey reveals that a good candidate stays in the market for around 50 days.

Zappyhire, he says, helps companies to ensure that the process is done in less than 50 days.

The pandemic played a key role in the company’s growth. According to Deepu, companies briefly froze their hiring processes in March 2020. However, by August of last year, recruiters embraced digital technologies to implement remote hiring.

“Everyone understood that remote hiring is going to be the next important step that they need to adopt in their process,” he says.

Speaking about whether the new Coronavirus variant Omicron has created any negative sentiments among recruiters, Deepu tells that companies have accepted that the COVID-19 situation is here to stay and have tailored the hiring process to suit the new normal.

COVID-19 has transformed the HR tech ecosystem. Human resources functions are now equipped with tools that are built on technologies like AI, deep learning, analytics among others to streamline the process.

Zappyhire’s growth has been in tandem. “This year from January to December, we have grown 10 times in terms of customers, and four times the candidate processing,” he tells.

Deepu is optimistic about the future. “We were cash positive in the first year and we doubled our revenue in the second year. We are going to 3X this year financially. We are focusing more on the growth aspect than the profitability at this stage,” he says.

As for its client list, Zappyhire has added startups, enterprises, SMEs (small and medium enterprises). It now helps companies such as ESAF Bank, Carestack, Surveysparrow, Jiffy.ai, BukuKas among others find the right talent.

Zappyhire was bootstrapped for two years before raising $100,000 in early 2020. Kochi, Jyothis says, is a strategic location for the startup as the operational costs in the city are one-fourth, or maybe even less than Bengaluru.

"The first few years we were actually building the product and ensuring our product-market fit. We eventually felt that we can start scaling this product to the outside world and expand to international markets and then the funding came as a natural progression,” tells Jyothis.

Zappyhire now wants to double its team from 30 people to more than 60 in one year, mostly in the sales and marketing team which would help the company to expand in North America and other countries.

It also plans to strengthen its product and create more IPs. The co-founders are clear that the focus of the company, at the moment, is growth across geographies instead of profit.