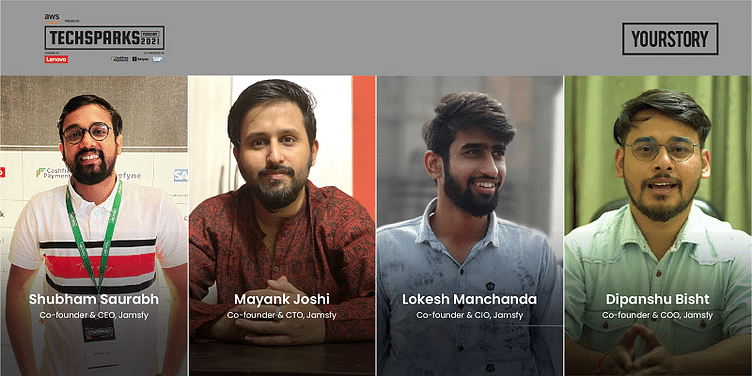 YourStory’s Tech50 2021 startup Jamsfy is the first company in India to provide services in ‘Headless’ and ‘Jamstack’ to international brands. It has generated a revenue of close to $200,000 within 15 months of being bootstrapped.

“All our dreams can come true, if we have the courage to pursue them,” Walt Disney once said.

So when in 2020, ﻿Jamsfy﻿ co-founders Shubham Saurabh and Mayank Joshi decided to bring Jamstack to India and took the entrepreneurial plunge, they were doing exactly that -- displaying the courage to pursue their dreams.

“We were batchmates at Birla Institute of Applied Sciences, Nainital. Post completing our degree in engineering in 2017, we both were working with Smart Data Enterprises and were staying as flatmates in Nagpur. We wanted to start our own venture and finally in July 2020, we came up with the idea of Jamsfy and we both resigned in August,” says Saurabh.

Shortlisted as a YourStory Tech50 2021 startup, Jamstack stands for modern web development architecture based on Javascript, APIs, and Markup (JAM). It isn’t a specific technology but rather a modern architecture for building apps and websites. Besides being “super fast” (as it relies less on server and database), it makes scaling up “easy and cost-effective” for companies.

Globally the percentage of developers in the community who are students has nearly doubled in the past year, to 16 percent from 9 percent, studies suggest. This has made Jamstack a go-to architecture for new developers.

“Currently, we have served more than 30+ brands internationally. Being the first company in India for Jamstack, we provided our services in ‘Headless’ and ‘Jamstack’ to brands like Wekan, Schbang, Wellness, DaMensch, and many others. We have generated a revenue of close to $200,000 within 15 months of being bootstrapped,” says Shubham.

The company was recently recognised by the Government of India’s Startup India initiative, and its websites were published as one of the official case studies of leading global Headless CMS providers, Storyblok.

While Shubham and Mayank had the tech expertise, within seven days of launch they realised that running a startup needed other talents as well. That’s when they got two more co-founders -- Dipanshu Bisht as COO and Lokesh Manchanda as CIO.

Dipanshu is a 2018 graduate from Birla Institute of Applied Sciences, Nainital with a major in Computer Science. Shubham pitched him Jamsfy’s idea in September 2020 and Dipanshu came on board from Feb 2021. The third co-founder and CIO Lokesh and Shubham met while working together at CrownStack in 2019. While he was already working on the sidelines for the startup since its launch in October 2020, he came on board full-time this April.

“Dipanshu is leading operations and data science because he has his whole exposure regarding BI (Business Intelligence) tools and getting relevant information from all kinds of data. Lokesh, we have known for more than 2.5 years and now he is driving FE (frontend) development,” says Shubham.

What’s under the hood

It has already received a trademark for Jamsfy™, the patent certification process is in progress. They are also in the final stages of the development of their SaaS product called Auditzy™.

“For the services, it took us two months at least to market our services to the brand because it's tough to revamp the technology architecture overnight. And that is how we support them in migrating to ‘JAMstack’ and ‘Headless Commerce’ architecture,” he explains.

For Headless CMS, it has adopted Strapi, Storyblok, Prismic, Sanity, Ghost, etc. AWS, Vercel, Netlify, Azure, and Digital Ocean are used for hosting, and MongoDB, MySQL, and SQL Server are used for databases.

It was in December 2020 that the founders got the global idea of Auditzy. “We started working on the idea validation and the market fit. Currently, we are in the final legs of development, and we will be going live in the early first quarter of 2022.”

The company faces direct competition from Jamstack solution providers such as Bejamas and Calibre. “But we do not have any direct competitors in India. We are closely monitoring the global markets.”

The platform aims to gain 10,000 active users by the end of 2022. It has the long-term vision to assist over one million users via their SaaS product Auditzy™.