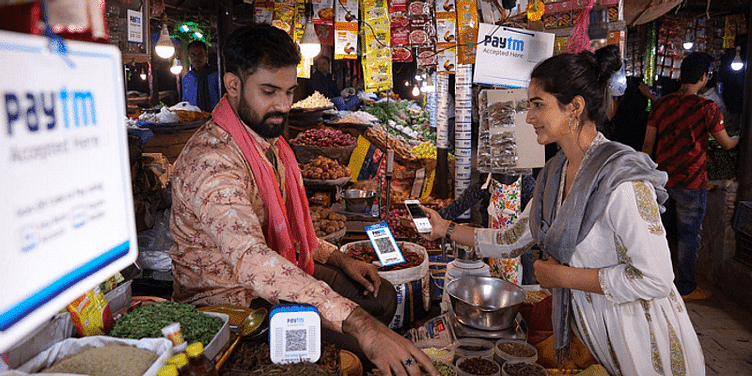 Paytm said its lending business as well as its average monthly transacting users have grown substantially in the first two months of the fourth quarter. Still, that didn't seem to assuage investors who kept their fingers steady on the sell button in market trading on Tuesday.

Shares of One97 Communications Ltd, the parent company of ﻿Paytm﻿, continued their nosedive on Tuesday, falling 6.6 percent to a fresh record low of Rs 630.40 in midday trading.

In disclosures to the BSE and NSE, Paytm continued to deny a report by Bloomberg on Monday that said the Reserve Bank of India's move to ban Paytm Payments Bank for onboarding new users came after the firm was found to be leaking data to Chinese companies that were indirect shareholders in the company.

"The Company would like to update that it has been informed by its associate, Paytm Payments Bank Limited ("PPBL"), that the regulator has not expressed any concerns regarding data leak or access shared with any Chinese firms. PPBL’s data servers are located within India and it proudly supports data localisation," the fintech giant said in its latest statement to the exchanges.

The Bloomberg report had sent Paytm's stock crashing on Monday to a new historic low just a week after it hit its first on March 7. The company had listed at Rs 2,150 in its IPO, and has wiped out 70 percent of its stock value in merely four months.

In a bid to stem some of the bleeding, Paytm issued a fourth-quarter update for January and February that showed its lending business had scaled and grown 449 percent on a year-on-year basis. The company said it disbursed 4.1 million loans in the first two months of the quarter, of which 2.2 million were in February alone.

The Noida-based firm said its user engagement had increased as well - its monthly transacting users (MTUs) are currently at 69.5 million, up 41 percent from a year-ago.

Paytm also added that it does not expect the restrictions imposed on Paytm Payments Bank to have any material impact on its overall business.