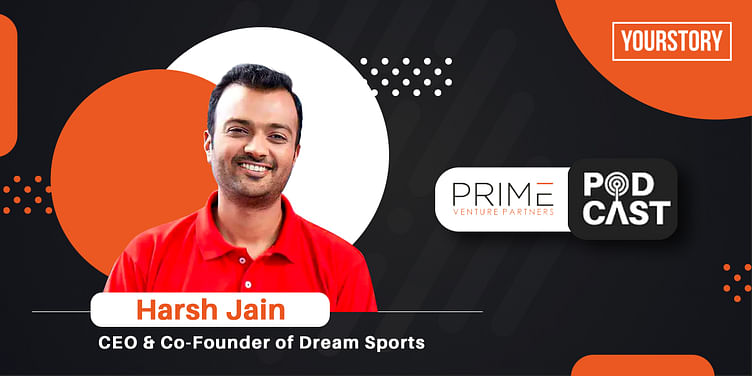 Harsh Jain, Co-founder and CEO of Dream Sports, recently appeared in a Prime Venture Podcast to talk about his experience transforming a personal love into a business. He also touched upon the need to build for Bharat, commercialisation of sports, learning from investor rejections and letting go.

Fantasy sports platform Dream11’ s founder Harsh Jain reveals the idea for the startup struck him and his co-founder Bhavit Sheth when the Indian Premier League was launched in India in 2008. Harsh was already playing EPL fantasy football for about seven odd years then, and the absence of fantasy sports ecosystem in India stared right back at him.

Thus began Harsh’s journey to build ﻿Dream11﻿. He believes that the total addressable market or TAM in India was massive and that became the company’s motivation to keep itself afloat even when the enterprise ran out of money. Today, Dream11 is an $8 billion company, with over 140 million active users on the platform.

Your startup is your sculpture, says Sanjay Swamy of Prime Venture Partners

In a recent episode of Prime Venture Podcast, Harsh recollects how in order to understand Dream11’s initial total addressable market, he compared the Indian market to that of the United States (US). He figured that if they could build for the 100 million sports fans in India, of which only 40 percent were estimated to come online, that still left Dream11 with 40 million in TAM. In Harsh’s words, “Large TAM[s] are very important for B2C hyper-growth opportunities because they’re very forgiving.” Yo u get that space to make mistakes and learn by not getting affected by the associated loss of customers, he adds.

Harsh also urges entrepreneurs to think about TAM from both top-down and bottom-up perspectives. The top-down approach may help to keep the inspiration alive during the initial days, but founders also need to focus on the niche segments within their TAM and dive into specific customer segments.

Harsh agrees a majority of Dream11 users come from tier-II and tier-III cities, attributing it to the time factor, with these regions having a relatively slower pace of life. “They (people from tier-II and III regions) have higher aspirations because any product or service that you can offer them, which can enhance their lives, has a higher Delta for them than a tier-one user.” If, as a business, you can maintain a small ticket size, tier-II and III cities are where the current opportunities are brewing.

Harsh attributes this shift in dynamics to Jio. “Jio has completely changed everyone’s TAM.” Additionally, he also appreciates the Indian government’s efforts to push digital India and build a $1 trillion dollar digital economy that, Harsh says, really opened up the market for new founders. Thus, he urges entrepreneurs to build for Bharat than just tier-1 regions, as the TAM then is much higher.

Dream11 was not a phenomenon when it hit the market. Post-2012, Harsh and his founding team approached almost 150 venture capitalists in just two years, only to be turned down. “But then each one actually taught us a little bit about our business, from gross margins to lifetime value and CAC,” recalls Harsh.

The key to building a business and getting funded is to listen closely to the investors and incorporate every lesson into your business idea, he adds. Harsh admits sometimes you also need to stick with your beliefs as a founder, but listening to the VC and go back with the problem solved is important as well.

Stepping aside and making way

Stepping aside from a company that was built on one’s dream and passion is difficult, agrees Harsh. But, for the company’s benefit, he says, it is imperative to “hand over the reins, build teams, hire people way better than us, and get out of their way.” According to Harsh, this will prepare the company for that marathon run and someday, a personal problem can become a multi-billion-dollar company.

To know more listen to the podcast here