Why CXOs of Portea, Innov8, Lenskart, and others are flocking to online networking platform Blue Circle 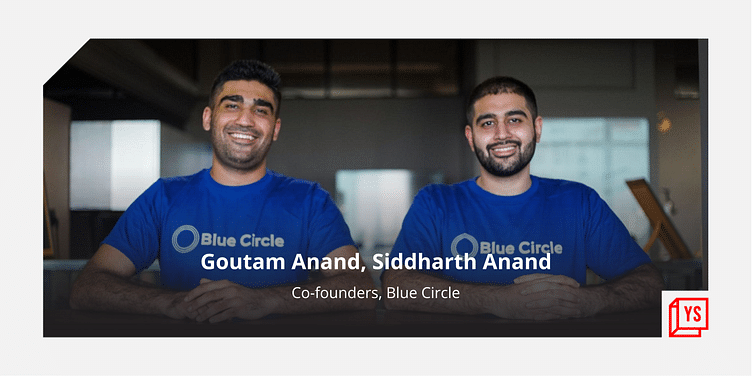 Founded in 2017 by brothers Siddharth Anand and Goutam Anand, Blue Circle is a social networking platform for C-suite executives and senior management that aims to foster connections, conversations, and exchange of ideas across sectors. The startup has 10K+ users on the platform at present.

When the pandemic hit in 2020, Siddharth Anand, Founder of ﻿Blue Circle﻿, a startup that helps CXOs, upper management, entrepreneurs, VCs, and senior executives network with each other, found himself in a bind. Pandemic restrictions limited any opportunities of holding offline events, which was the startup’s bread and butter, and a lack of clarity on when things would return to normal made it a precarious position to be in.

But Siddharth, who describes himself as a problem solver, decided to pivot and launch an online platform, and do much of what he was already doing offline — fostering connections between high-level executives.

For startups, 2020’s mantra was “nimble or die” — and those that managed to pivot or course-correct have gone on to survive. Blue Circle managed to keep its head above the water by swiftly launching an online networking platform once COVID restrictions precluded physical events from taking place — and that has paid off in spades.

Siddharth founded the platform after he realised that existing platforms today were not very sector-focussed, able to spark conversations, or even easy to use. He wanted to create something where people could engage in genuine discussions, solve problems together, get access to a talented hiring pool of experienced professionals, and share knowledge with each other.

“They (CXOs/senior executives, etc.,) were looking for a higher frequency of curated conversations, opportunities, and access to relevant connections across geographies in the sectors of their interest. And they wanted all this digitally too. Giant platforms like LinkedIn had gotten cluttered and could not fulfil this need,” Siddharth tells YourStory.

It currently has over 10,000 business leaders from India as well as from other parts of the world. Some prominent names on its list include Naveen Munjal, Managing Director at Hero Electric; Arvind Mehra, ED and CEO of Mahindra Aerospace; Sameer Chopra, CFO at ﻿Lenskart﻿; Louis Coucke, CFO at ﻿H&M﻿; Rahul Bothra, CFO at ﻿Swiggy﻿; Padmaja Ruparel, Co-founder of Indian Angel Network; Balram Mehta, COO at Renew Power; and Gautam Khanna, CEO at Hinduja Hospital, among several others.

Apart from helping CXOs and senior executives network with each other virtually, Blue Circle offers:

So far, the startup has seen 50,000 connection requests among members on the platform, as well as enabled 10,000+ conversations. Its daily average user count is around 20 percent of 10,000. About 95 percent users are from India, while 5 percent come from the US, UAE, Singapore, the UK, Sri Lanka, Germany, and Bangladesh.

The startup has 20 sector-focussed communities such as e-mobility, energy, healthcare, logistics, telecom, textile, media and advertising, hospitality and tourism, retail and consumer goods, education, and agriculture, among others, on its platform.

​​Siddharth says he has seen wonderful examples of business deals and partnerships being struck over the platform.

“We had a hospital chain owner on the platform looking for vaccines, who got connected to the Serum Institute of India and got vaccines delivered to all of his hospitals in South India. We also had a case of a drone manufacturer who got connected with another business leader on Blue Circle, and they are now exporting drones to African companies,” he quips.

When it first launched and was curating offline events, the startup used to charge members up to Rs 1.5 lakh per annum, per member.

After moving to the online format, the startup has revised its rates.

“In 2021, we did a paid membership pilot to understand the members’ willingness to pay for a digital network before we launched the mobile app, and within a matter of weeks we saw 100 paid members paying Rs 7,500 for an annual membership,” says Siddharth.

Blue Circle has not started charging its members anything yet. It’s mainly focussed on growing the platform organically and quickly. In the future, it intends to introduce a freemium and premium membership.

At present, it gets revenue mainly from sponsorships for its virtual, and now, offline events. In the future, it plans to formally launch paid recruitment solutions, advertising solutions, as well as a B2B discovery space, which will help bring in steady revenue.

The Gurugram-based startup has raised around $500,000 over two rounds of seed funding so far. It was bootstrapped for the first three years since it was founded in 2017, and has hit breakeven. It is planning a pre-series A or Series A round in the next six months.

"Like the way LinkedIn has scaled up across the world, we wish to scale similarly and become the LinkedIn for leaders," Siddharth says.

Blue Circle’s competitors include the likes of LinkedIn, ﻿CoffeeMug.ai﻿, US-based ﻿Lunchclub﻿, Grab Chai, and ﻿SHEROES﻿ (exclusively for women), among several others.

A Statista report says that the social networking segment is projected to hit $295 million in revenue by 2022-end, and grow at a compound annual growth rate of 10.18 percent to $434 million by 2026.

Even though social media is among the most used platforms on the internet, it is cluttered with companies and tricked out “new-age” apps that “offer something new”. The trend has been that smaller networking platforms either get absorbed by some of the bigger ones, or the likes of Meta and its cohort simply replicate any trending formats and features, causing the smaller ones to eventually die out.

Comparatively, exclusive social media community platforms, even if they don’t scale to the level of a LinkedIn, do manage to sustain, and, more importantly, build loyalty with their user base — something that can work in the favour of a startup like Blue Circle.