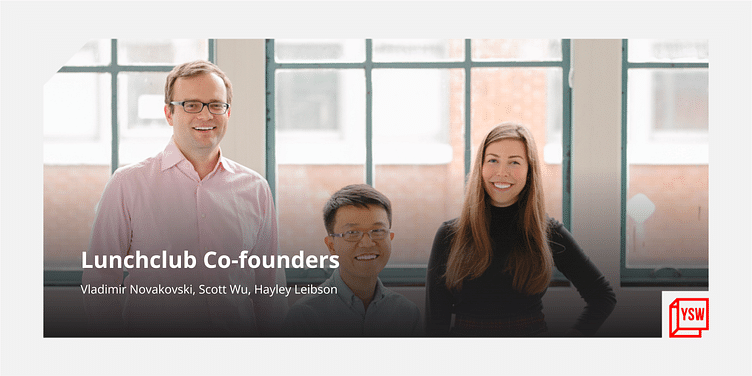 California-based Lunchclub is an AI-powered global networking platform that sifts through tons of data to make appropriate professional connections in seconds.

An often unacknowledged yet important aspect of professional growth is the ability to network with the right people. Some would even say this is the bedrock of professional success. But in a world that is increasingly functioning online, can this age-old practice be sustained? It certainly can by going digital.

California-based ﻿Lunchclub﻿, launched in 2018 by Vladimir Novakovski, Hayley Leibson, and Scott Wu, is one of the premium platforms addressing this problem. The AI-enabled networking platform has made successful inroads into India as well through their office in Bengaluru.

“The Lunchclub platform aims to address the boundaries of conventional geography and existing connections through the world’s first AI super-connector for networking. It enables people to build deeper, and more meaningful professional relationships through a better network.

"We connect a diverse community of members across the world and enable them to have more opportunities. We leverage massive amounts of data through our own cutting-edge AI technology – a fact that differentiates Lunchclub from other networking platforms,” shares Pritish Nair, Global Partnerships Lead, Lunchclub, in a chat with YS Weekender.

Vladimir Novakovski, Co-founder and CEO of Lunchclub, graduated with honors from Harvard College at the age of 18. He ran various engineering and machine learning teams within the financial industry and other startups before developing Lunchclub. He is also a prolific angel investor with a global focus.

Scott Wu was the world champion in the 2014 International Olympiad in Informatics and a gold medal winner at the 2016 ICPC on the Harvard team.

Hayley Leibson is a serial startup founder and writer with expertise in consumer tech and marketplaces. She was named in the Forbes 30 Under 30 2020 for consumer technology and as one of the ‘15 Entrepreneurs Under 30 to Watch Out For’ by Entrepreneur.

“Lunchclub is the world’s first AI super-connector. Unlike other networking platforms, where random connections are suggested, or people send add requests to anyone, AI at the core of our technology. Advanced algorithms match users on the basis of common interests.

“Like a dating app, Lunchclub matches people and facilitates business lunches among like-minded professionals. Our AI algorithm searches our database to find a new connection every week. Thus, the quality of connections on Lunchclub is much better and more meaningful than a platform where one might have thousands of connections, but no leverage,” Pritish says.

The AI technology performs the groundwork, building comprehensive individual profiles to match them with those best for each other. It does this by relying on research and analysis that reduces the entire process to a matter of seconds.

The more data it collects and more connections it makes, the smarter the technology becomes, leading to more efficiency and precision – contrary to traditional matchmaking that focuses on simple characteristics.

As Pritish points out, “Think of the exponential connections that, paired with the internet, eliminate geographical and even socioeconomic barriers. Each conversation has the chance to be that much more impactful and could even lead to the creation of the next Google, Apple, or Tesla.”

The story of the name is an interesting one. When they started out in 2018 with just 50 members meeting for lunch in the SoMa district of San Francisco, matched by their AI technology, the team decided to call the platform SoMa Lunch Club. The name stuck.

Most members join by referral, but recently free memberships have opened up across the globe, including India, which people can join on the basis of a LinkedIn URL. The process is an easy one, where members share their background, interests, goals, and other fun facts, to be matched with others. The app can be accessed on Android and Apple devices.

“Lunchclub is a platform that enables professional networking, and our most active users tend to be folks with five to 20 years of career experience. However, we welcome any professional who has an open mind and wants to learn and grow together,” Pritish says.

Though a global platform, Lunchclub’s biggest audience comes from the US and India. Pritish credits their popularity to their connections not being transactional and fostering mutual respect, adding value, and encouraging people to connect over similar interests.

“Our only competition is with in-person introductions and connections that happen outside of a tech platform – like the person you happen to meet at a seminar or the business connection your mom happens to make for you. Today’s world is more connected than ever before, yet so many people lack a meaningful process for making new business connections. That’s where we come in,” he says.

The team at Lunchclub prides itself on not being transactional, focusing instead on mutually beneficial connections, especially with those people they wouldn’t have met otherwise. Pritish feels Lunchclub users have innately deeper conversations.

This is evident from the reviews they have received.

Frederic Friedel, Co-founder of Chessbase, gave five stars to the first nine of 10 connections he made on Lunchclub and is currently working on projects with three of them.

Eli Bohemond, Career and Leadership Coach and Co-founder of Your Career Strategy, shares, “Lunchclub is a door. Behind it could be opportunities, friendship, support, empathy. Once you get talking, the magic starts happening.”

According to data published on researchandmarkets.com, the global social networking platforms market was evaluated at $192.950 billion for the year 2019 and was projected to grow at a CAGR of 25.38 percent to reach a market size of $939.679 billion by the year 2026. Platforms like Lunchclub are therefore well-placed.

Having raised $24 million in a Series A funding round where it was valued at over $100 million, Lunchclub has cumulatively raised a total of $30 million in funding so far.

Pritish says, “Our connections have led to outcomes such as people co-founding companies, getting startup investments, hiring team members, and achieving career growth together. With our focus on creating value for our users and quality over quantity, we have already enabled around two million matches globally, most of which have resulted in a positive outcome for both sides.”

The pandemic proved a major disruptor to the business, but the team pivoted quickly. Their AI-powered platform was already facilitating connections, and the major switch they made was to arranging one-on-one video calls during the period to overcome challenges of meeting in person.

The networking startup is in the process of expanding their suite of products to help members network with a wider range of goals and formats.

“We are also establishing partnerships with co-working hubs, conferences, and global platforms to further expand the outreach of our network in the post-pandemic era,” Pritish says.

“We are steadily growing, and our long-term vision involves every professional in the world being on Lunchclub as their chosen way to network. Enabling our users to meet the right connections and achieve desired outcomes is our biggest reward.”