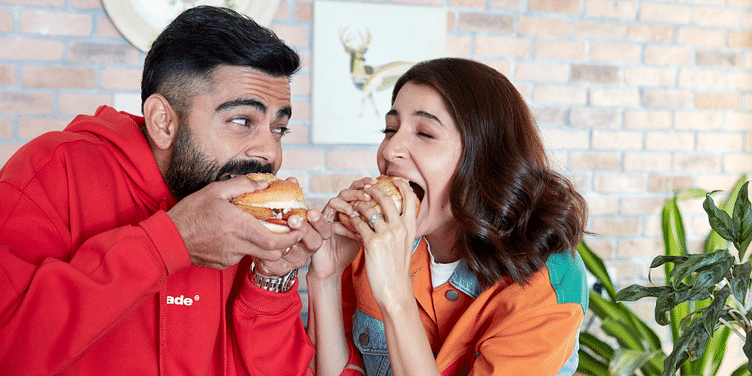 YourStory presents daily news and funding roundups from the Indian startup ecosystem and beyond. Here's the roundup for Tuesday, March 15, 2022.

﻿Blue Tribe Foods﻿, the plant-based meat foodtech startup backed by Anushka Sharma and Virat Kohli, has selected Singapore as the launchpad for its expansion into Southeast Asia. It already has a presence in the Indian market with partners such as Nature’s Basket, Benzers, Foodhall, and Society Stores.

In the Singapore market, Blue Tribe will roll out products such as plant-based chicken sausage, chicken nuggets, chicken keema, and mutton keema across supermarkets and stores.

Sandeep Singh, Co-founder, Blue Tribe says, “After gaining massive traction among our dedicated Indian clientele, Blue Tribe is thrilled to build on that success by bringing our unique, planet-friendly foods to Singapore, where demand for plant-based meat is surging.”

﻿IDAM House Of Brands﻿ has acquired a 40 percent stake in Bevzilla, a D2C instant coffee cubes brand, for an undisclosed value.

Founded in 2020 by Divisha Chaudhry and Anurag Chhabra, Bevzilla provides Instant Coffee Cubes which are sweetened through organic date palm jaggery. The products are available in over 100 retailers and ecommerce marketplaces.

IDAM founders Aakash Anand and Saahil Nayar in a statement said, “Bevzilla has carved a niche in the beverage industry and attained expertise, making it a potential brand for acquisition. We’re delighted to be working together and hope to achieve the Rs 100 crore ARR target in the coming two years.”

﻿Mumbai Angels﻿, a platform for early-stage investments, has onboarded x10xventures, a venture investment and advisory platform, as Partner for The Co-Investment Programme. While both entities will jointly invest in high-potential businesses, The Co-Investment Programme will also offer selected startups a chance to raise their next round of funding from Mumbai Angels, whilst also providing unrestricted access to Mumbai Angels’ Multiplier Programme, which is an exclusive marketplace for its portfolio companies.

Nandini Mansinghka, Co-founder and CEO of Mumbai Angels, said, “Given that both portfolios have similar startups that we have backed in the past, it’s safe to say that our investment ideas and perspectives align. We believe their strategy and way of operating will help onboard a promising league of startups for our program and we look forward to working with them to reach greater heights.”

India has emerged as the world’s biggest fantasy sports market with a user base of over 13 crore and is expected to grow at a CAGR of 32 percent in the coming years, according to a joint report by The Federation of Indian Fantasy Sports (FIFS) and Deloitte.

The report titled ‘Fantasy Sports: Creating a Virtuous Cycle of Sports Development’ in collaboration with Deloitte says the growth of the market is due to factors like large tech-savvy millennial population, growing affiliation with sports, rapid smartphone penetration and availability of low-cost mobile data. The market size is projected to grow from Rs 34,600 crpre in FY21 to an estimated Rs 1,65,000 crore by FY25, thereby clocking a CAGR of 38 percent.

According to the report, cricket, the dominant sports on fantasy sports platforms, might see its share going to other sports such as kabaddi, hockey, football and volleyball which are growing in popularity, but is expected to continue growing at 30% CAGR over the next four years and remain the highest contributor to the overall revenue of the fantasy sports industry.

Flipkart Health+ has announced the appointment of Prashant Jhaveri as its Chief Executive Officer (CEO) to lead the ecommerce marketplace’s foray into the fast-growing healthcare sector in India.

Prior to joining Flipkart Health+ Prashant was the Chief Business Officer at Apollo Health and Lifestyle Limited, where he was responsible for growth, partnerships and creating cross-functional synergies across different consumer facing businesses and touchpoints. He also served as the Chief Executive Officer of MediBuddy, and Chief Business Officer for the Medi Assist Group in his earlier stints.

How cricket and cinema are boosting India’s NFT market, spurring innovation among startups

In his role, Prashant Jhaveri, Chief Executive Officer, Flipkart Health+, said, “There is immense opportunity to take healthcare to the deepest parts of India through the right technology solutions and consumer value propositions.”

﻿Gruhas Proptech﻿ has invited applications for the Gruhas ASPIRE: Accelerating Sustainable Proptech in Real Estate, a six-month scaling programme for early-stage proptech startups, powered by Anthill Ventures and in partnership with the DLF Family Office.

The programme will invest and scale companies in the following sub-sectors: construction management, property and asset management, new materials and technologies, and investments and financing.

The Gruhas ASPIRE programme will make strategic investments in each startup, enable market access via India’s leading developers and property managers, and provide dedicated support in marketing, sales, product, team, and other business challenges. The programme will ensure that cohort startups secure POCs (proof of concepts) through a strong corporate network and raise capital via Anthill’s investor network as well as a demo day at the end of the programme.

Agritech startup ﻿Fasal﻿ has won a patent for its innovative solar-powered IoT device for precision farming — Fasal Kranti. The patent, granted by the Indian Patent Office is a recognition of its innovation, novelty and application.

The data collected from the hardware device is processed into actionable advisories for farmers using agronomic models, Artificial Intelligence (AI) and Machine Learning (ML). Horticulture farmers are then alerted on these farm-specific advisories via an app on their mobile phones — lending them a comprehensive picture of their farms.

﻿Unicommerce﻿, the ecommerce-focused SaaS platform, has entered into a strategic partnership with retail chain Shoppers Stop. As part of this collaboration, Unicommerce will empower leading brands with a technology platform to manage their orders from Shoppersstop.com and other marketplaces on a centralised platform to further extend their consumer reach leading to business growth.

It will also help other leading retail brands on Shoppersstop.com to integrate their operations on Unicommerce’s platform to streamline their supply chain and deliver products efficiently. The collaboration will allow brands to sell swiftly through Shoppersstop.com, leading to operational efficiency and elevating the post-purchase experience for the end consumers, a statement said.

Fashion marketplace ﻿Myntra﻿ has announced the launch of a dedicated shopping platform called ‘Teens Store’. This is aimed towards fulfilling a wide gap and addressing specific needs of teens in the market who seek to experiment with trendy fashion more often and have varied requirements in styles, size, brands and fitting, the company said.

The ‘Teens Store’ will house a curated range of styles, from a host of well-renowned international brands and domestic brands like Justice, CK, UTH by Roadster Life & Co., Tommy Hilfiger, HRX, H&M, Nike, Puma, Adidas, and Mango Teens, complemented by the latest fashion trends, styling tips, and ensembled looks. The store currently houses over 20,000 styles from over 100 domestic and international brands, and aims to increase the selection to over 30,000 styles over the next six months.

Some of the key categories in the teens segment that cater to various need states include athleisure, denim wear, innerwear, casual wear, party wear, ethnic wear, footwear, and accessory.

﻿Reshamandi﻿, the digital platform for natural fibre supply chain, has acqui-hired ﻿Hashtaag﻿, a tech startup as the former looks to strengthen its technology stack.

ReshaMandi procures scientifically graded cocoons from farmers, supply them to reelers, make high-quality yarn accessible to weavers and connect them with numerous retailers. On the other hand, Hashtaag is a custom software development company which has built expertise in areas such as application development, IoT, DevOps and network security solutions.

﻿FarMart﻿, a SaaS-led B2B food supply platform, has acqui-hired fruits and vegetables (F&V) logistics platform, Subjimandi.app to optimise its logistics and expand its product portfolio by entering into the F&V categories.

Subjimandi.app was set up in 2020 to replace the physical marketplace and has its presence in states such as Maharashtra, Telangana, and Andhra Pradesh. FarMart aims to create a large food supply platform to give farmers market access to sell its produce in India and globally.

Mobile-based application for sleep management ﻿Neend﻿ has raised $700,000 in a pre-seed round led by Better Capital. The round also saw participation from HNIs including Rohit Bansal and Kunal Bahl of Snapdeal, ﻿CRED﻿ founder Kunal Shah, Swiggy co-founder Nandan Reddy, Niraj Singh of Spinny, Sandeep Singhal of Nexus, Groww co-founders Lalit Keshre and Harsh Jain among others.

The company will utilise the capital to go deeper into categories such as Yog Nidra, guided meditation and music, apart from launching other Indian languages. It will also collaborate with professional sleep experts to measure and fix users’ sleep issues.

Founded in 2021 by Surbhi Jain, Neend helps users cope with sleep-related problems, offering relaxing bedtime stories, soothing sleep sounds and ambience. The app claims to have over 50,000 downloads and the company’s YouTube channel has over 75,000 subscribers.

Direct-to-Consumer (D2C) apparel brand ﻿Gabaru﻿ has raised an undisclosed amount from revenue-based financing company GetVantage. The Pune-based company will utilise the funds for brand building and inventory management, it said in a statement.

Founded in 2013 by Ashutosh Prakash Deshpande, Gabaru makes twinning apparel for couples and family, including t-shirts, shorts, track pants, ethnic wear and others. It sells primarily through e-commerce marketplaces, apart from its one website. The company claims to have clocked nearly 10 lakh orders since inception and clocked revenue of Rs 10 crore last year.

﻿Cognigix﻿, an e-learning company has taken under its fold the customer e-learning services vertical of Skilldom, which is also in a similar space.

According to a statement, the business merger is the first step towards Cognigix’s strategic vision to provide a comprehensive set of custom, innovative learning solutions to its clients and expand its footprints in international geographies.

Cognigix Founder and CEO Ajay Kumar said, “We were looking for avenues where our synergies would match and bring in higher value to our clients. With additional talent pool, digital assets, experience and skills that Skilldom brings, we are excited to expand into new markets and create exceptional learning experiences for industries across geographies.”

Proptech unicorn ﻿NoBroker﻿ has completed its employee stock ownership plan (ESOP) buyback worth Rs 32.2 crore with 95 of the company’s former and current employees given the opportunity to liquidate their stock options.

A spokesperson for NoBroker said, “ESOPs are a great way to hire and retain talent and they also help build employees’ faith in the company. ESOP buyback is a small way to express our gratitude to employees who have helped us grow at this scale. We see our employees as part of the large NoBroker family and would love to see them grow and prosper with us.”

BNPL platform ﻿Simpl﻿ has announced the appointment of Robin as Principal Data Scientist. Robin has served as a Lead Scientist - Analytics Science in his previous role at FICO USA.

His new role at Simpl includes creating high-impact data science and anti-fraud projects in close coordination with other stakeholders. He will be working as a technical consultant to product managers from different departments.

On the new appointment, Simpl CEO and Co-founder Nitya Sharma said, “In the fintech payments industry it is imperative to continuously innovate by deploying new-age technologies. In this regard, we are excited to onboard Robin as Principal Data Scientist. He will be instrumental in spearheading anti-fraud initiatives at Simpl.”