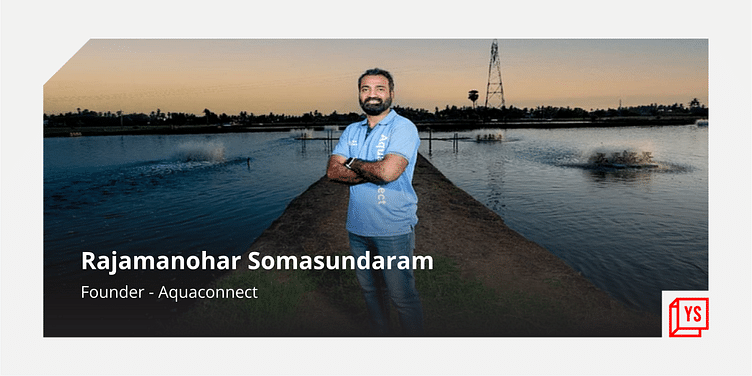 Launched in 2017, Chennai-based Aquaconnect uses AI and satellite remote sensing technologies to help 60,000 fish and shrimp farmers increase productivity. It claims that the number of farmers on the platform has grown by 4X and revenue by 14X in 2021.

For the longest time, aqua farming, or the activity of growing shrimps, lobsters, mussels, and other edible aquatic organisms, remained highly unorganised in India. Farmers reaped good harvests but failed to make the money they deserved on account of the middlemen.

The startup uses AI and satellite remote sensing technologies, and works with 60,000 fish and shrimp farmers to help them increase their productivity. It also organises the entire value chain, and connects farmers with upstream and downstream players, including vendors and suppliers, farm input manufacturers (that provide probiotics, water chemicals, manufacture feeds, chemicals, etc.) and exporters.

As Raj puts it, “We enable the enablers.”

Over the last five years, the tech-driven startup claims to have helped its network farmers reduce their inputs costs by 30 percent and increase their output by 20 percent. In the last year, the number of farmer members has grown 4X and the founder claims that their revenue growth has been 14x during the same period.

The startup’s growth has been facilitated by the fact that India is the second largest fish-producing country in the world, accounting for 7.58 per cent of the global output, according to the Economic Survey of 2020-21, and providing livelihood to 28 million people.

According to the Union Fisheries ministry, fish production for 2019-20 stood at 14.16 million metric tonne, as compared to 13.57 MMT in 2018-19. However, the irony is that the output from marine-based fishing is declining even as the harvest from land-based fishing is increasing.

According to Raj, this is a $25 billion industry where the upstream segment which includes the inputs like fish feed and operating the farms is about $9 billion and downstream which is the value generated through sales primarily is about $16 billion.

Aquaconnect has raised $17 million in funding till now in a combination of equity and debt. The investors in this startup are the likes of Omnivore, Rebright Partners, Flourish Ventures, Trifecta Capital among others.

A key constituent of the aquaculture industry are the farmers and their farms. A pond, which is generally spread over an acre to produce and harvest fish and other aquatic species, needs about Rs 7-8 lakh for shrimp farmers per harvest and Rs 3 lakh for a fish farmer.

Raj says the three main challenges that an aquaculture farmer faces are water quality, feeding efficiency, and quality of the fishes. If the quality of the water in these ponds is not of desired standard, the output can be severely affected.

He gives an example of how the feeding ratio to these fishes should be in the range of 1:1.2 to get the optimum output. However, most farmers follow the 1:2 ratio, which results in feed going to waste.

“We have created all kinds of measurements that are provided to farmers to ensure they benefit from these inputs,” Raj says.

Aquaconnect combines the elements of human and technology intervention to ensure that farmers are made aware of the best practices prevalent in aquaculture to ensure that there is higher output. It has created its own geographic information system (GIS) to collect data on the health of these aquaculture farms.

Raj says, “We have got boots on the ground and eyes in the sky.”

Aquaconnect has a network of experts who provide necessary expertise to farmers along with franchisee partners (retail outlets that provide all necessary inputs like fish feed, medicines and other necessary tools). Information is also available on the app.

Ray says historically farmers were not able to get scientific or quality inputs, and claims that the profit margin of network farmers has increased by 15 percent.

However, the biggest benefit that Aquaconnect is able to bring to these farmers is the access to cheaper capital. Given that this sector has been bought under the ambit of priority sector lending, there is still hesitancy on the part of banks and financial institutions to provide loans to these farmers unlike those associated with agriculture.

Raj says, “in agriculture, everything is above the soil but here (aquaculture) everything is under the water, which is a big challenge in efficient underwriting or collection. It is there that Aquaconnect is able to bring visibility.”

As Aquaconnect has in-depth data on the status of each shrimp/fish pond, it helps the banks to underwrite the loans much more efficiently as there is much more transparency.

Unlike in the past, where fish farmers used to depend on private lenders who charged exorbitant rates, they are now able to get loans at much lower interest rates.

Raj claims loan cost to farmers has come down by 60 percent. “We are not just an aquaculture startup but also a fintech.”

Aquaconnect has also connected with other players in the ecosystem, especially those who procure these produce from farmers. Given the amount of data available, the startup is able to provide for efficient sourcing, predictability, and traceability of the output.

The concept of traceability is very important in the aquaculture industry, especially when one is focused on the export market.

Aquaconnect has now made its foray into the overseas market with an export order from Japan.

“If a buyer wants to buy fish or shrimp, we are able to exactly identify when harvesting happens on the ground,” Raj says.

The tech-driven aquaculture startup has around 160 partners on its platform, which includes its retail network, manufacturing companies, pharmaceutical firms, banks, and others. It aims to raise this number to 500 by the end of next year.

Aquaconnect earns its revenues through trade margins from the retail network, pricing arbitrage of the produce that is sold through its platform, and the commission it earns for facilitating the loans from the banks. It is entirely free for farmers.

Given the strides it has made over the last five years, it is now looking to expand from the four states it is presently operational in - Tamil Nadu, Andhra Pradesh, Orissa, and Gujarat. It is eyeing landlocked states like Madhya Pradesh, Chhattisgarh, and Bihar, which at are into inland fishing in ponds

Raj believes Aquaconnect is making the system more efficient and providing access to technology to every stakeholder in the entire value chain.

“Aquaculture is all about culturing your water, and we need to build sustainability in the entire ecosystem,” he says.

The demand for aquaculture produce is expected to rise in the coming year with a growing and aspirational middle class, and focus on protein in diet.

“This industry is growing at 10 percent CAGR and there is a huge opportunity to double the number of farmers on our platform year on year,” Raj says.