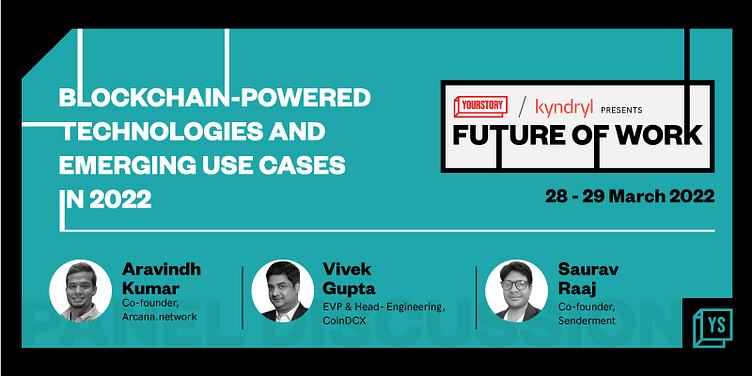 Even though cryptocurrencies have played a significant role in showcasing the importance of blockchain technology, its scope ranges much beyond that.

“The spending on blockchain technology solutions would be hitting close to $11.7 billion with over 70 million global wallets. It's only reasonable to expect that the innovation, in this case, will grow tremendously,” said Vivek Gupta, EVP and Head of Engineering, ﻿CoinDCX﻿.

Vivek was speaking at a panel discussion on ‘Blockchain-powered technologies and emerging use cases in 2022’, at YourStory’s ‘Future of Work summit 2022’. Blockchain technology has gained popularity over the last couple of years, primarily due to cryptocurrency, but it holds much more potential than that.

Vivek along with Saurav Raaj, Co-founder, Senderment and Aravindh Kumar, Co-founder, ﻿Arcana﻿ came together to discuss the potential of blockchain-powered technology, value of data ownership in Web 3.0, and the rise of India as a blockchain hub. Here are some of the key takeaways.

The rise of blockchain

Vivek noted that even though crypto has played a major role in driving innovations in blockchain technology as well as in its adoption, blockchain has been more than just a foundation technology for crypto.

He also emphasised the importance of educating people about the significance of crypto and blockchain, how they work, and the challenges that come with them.

“As one of the largest exchanges in India, CoinDCX plays a significant role in driving forward this education that in many ways will also drive forward the adoption of the ecosystem. For example, we have the DCX learning platform, which helps people learn about cryptocurrencies, significant blockchain technologies, etc”, added Vivek.

Speaking about the value of data ownership in Web 3.0, Aravindh said that our data would not be sold, insisting that even though it’s sold, it’ll be much different from how it was done during Web 2.0.

“Users can decide if they want the data to be monetised, it is not up to the platforms. So once you decide, you can decide how much of the insights and personally identifiable information goes into the data set. I think this will be the fundamental change in how advertisers and platforms monetise data, all of which have user consent at the core of it, because, without their consent, you cannot get access to the data and manoeuvre your way into an obscure privacy policy,” explained Aravindh.

Speaking about India’s dramatic rise in establishing itself as a global blockchain hub, Vivek said that several industries are leveraging the value of blockchain, which coupled with India’s technology muscle, presents a huge opportunity for the country to drive this blockchain adoption forward.

Aravindh noted that governments are becoming more anti-end-to-end encryption, which might result in decentralised encryption providers soon, while also adding that more onus needs to be placed on privacy-focused blockchains.

“Today, most transaction activities are public. There is some backlash within Web 3 as well, where exchanges and platforms do not want to work with privacy coins, but I think when they expand the scope, people will adopt privacy, and we cannot afford to not support these tokens,” he said.

Concluding with their thoughts on governance versus government policy in India, Aravindh said that the policies are hindering technology adoption, while Vivek appealed for ‘maximum governance, minimum government’. “Innovation is always going to be ahead of governance. Everybody knows that. It's basically a matter of one catching up,” Vivek concluded.

Learn more about the event here.