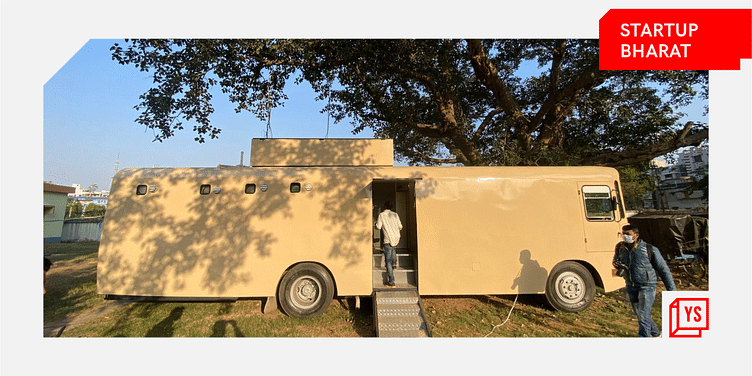 Incubated by IIT Mandi Catalyst, Eloo was set up in 2019 to look into creating safer, sanitary and hygienic washroom facilities, especially for women. The startup has piloted one project in West Bengal’s Santiniketan, so far.

When Diptendu Roy was travelling with his girlfriend (now his wife) through Chhattisgarh back in 2018, he realised there were no rest stops anywhere on the highway. While it was easy for Diptendu to take quick bathroom breaks, his girlfriend struggled to find a safe spot to relieve herself, and had to use precariously constructed hut-like enclosures on the rare occasions they chanced upon one.

The highway in southern Chhattisgarh did not have any rest stops mainly because of threats from Naxal groups in the area.

The smattering of dhabas (roadside eateries) they visited did not have any washrooms either — they were the only pit stops on that route, and since business was good because of a lack of any other options, they didn’t feel the need to do anything to remedy the situation.

When Diptendu poked and prodded the dhaba owner about the lack of washroom facilities, he was told local women travelling on the highway didn’t feel the need to use them because they abstained from drinking or eating anything at all on days they’d planned their travels.

As an avid biker and traveller himself, —  Diptendu once travelled across India on his bike — he decided to do something to address this problem, and came up with a unique concept of turning old, decommissioned buses into highway washrooms.

He set up ﻿Eloo﻿ — an IIT-Mandi Catalyst-incubated startup, to look into this commercially. So far, the Raipur-based startup has piloted one project in Santiniketan, West Bengal, where Diptendu grew up. The project hasn’t started yet due to COVID-19 lockdowns, Diptendu says, but work is ongoing.

Eloo’s bus washrooms are quite unique because they not only upcycle what would have been a potential waste — decommissioned, old buses — but also because set-up costs are cheaper and no land has to be bought as such.

The startup has installed IoT devices to monitor the cleanliness and sanitation of the washrooms, and users are asked to rate or flag any areas of concern after they use the facilities.

Diptendu says maintenance of the washroom facilities will be undertaken by local women self-help groups (SHGs) who will be responsible for maintaining sanitation and cleanliness. In return, Eloo plans to help these women set up a small cafe attached to the same bus where they can sell snacks and tea, as well as earn something by charging people using the rest stop facilities.

Dhaba owners, Diptendu realised, are not as open to the idea of having to maintain a washroom facility as women SHGs are — and employing women would make other women feel safer about using the rest stop facilities too.

The bus modification costs around Rs 17 lakh, Diptendu says, which can be easily recovered from the money the startup plans to charge users, although the usage fee hasn't been fixed yet. The pilot in Santiniketan, West Bengal, was done using a grant of Rs 22 lakh from the district government in Birbhum.

The startup, founded in 2019, has not raised any venture capital funding so far. Government grants and CSR funding is more likely the right fit for the social enterprise, Diptendu reasons.

The sanitation problem in India

India ranks quite high on the list of countries with poor sanitation facilities in the world. The Modi government declared the country was open defecation-free in 2019, but the ground reality has been quite different.

About 28.7 percent of the people in Indian rural households still don’t have access to toilet facilities, according to the 76th National Sample Survey conducted by the National Statistical Organisation in 2018.

The situation is no better on Indian highways where washroom facilities, especially for women, are paid no attention to, and are often either completely out of commission, or badly maintained.

In the near future though, the focus is on setting up three more buses in Chhattisgarh’s Bastar region, as well as enrolling more SHGs on the platform so they could be trained to maintain the buses.

Diptendu says once the number of the bus washrooms increases, they will be mapped on Google and Apple's map ecosystems to make them more visible and accessible.

The highway food and beverage (F&B) industry is quite fragmented and non-standardised in India, with a mix of private and government establishments mostly catering to travellers. The common link between these two service providers, however, is the absence of clean, sanitary washroom facilities for women.

Considering India’s highways logged 22.6 trillion passengers per kilometre across the country in 2019, according to a Statista report, and the fact that movement of vehicles on highways has increased since COVID-19 hit, facilities like the ones Eloo plans to set up could prove to be lucrative.