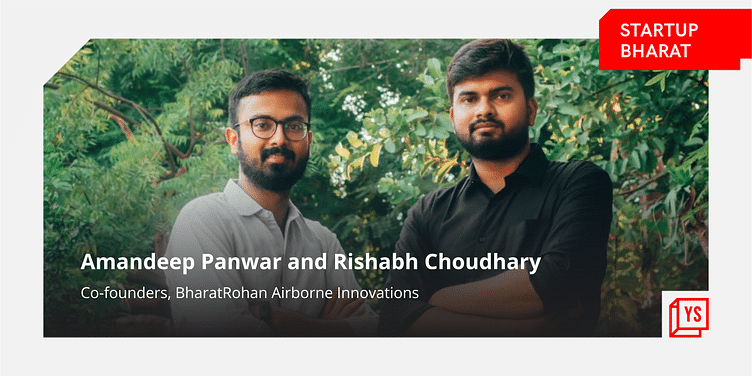 After interacting with farmers, they realised that almost every one of them faced issues related to pest attacks and crop diseases that remained undetected until the destruction reached the ETL (Economic Threshold Level), where the value of the crop destroyed exceeds the cost of controlling the pest, or until there is visible damage to the crop.

According to an Indian Council of Agricultural Research (ICAR) study, around 30-35 percent of annual crop yield in India gets wasted because of pests. The Associated Chambers of Commerce and Industry of India estimates that this leads to Rs 50,000 crore being lost annually.

“Farmers apply pesticides only after the infestation crosses the EIL (Economic Injury Level – lowest population density of a pest that will cause economic damage). Similarly, the lack of soil test-based nutrient application hampered the quality of crop growth and excess usage of fertilizers has been depleting the soil fertility,” Amandeep, Co-founder and CEO of BharatRohan Airborne Innovations, tells YourStory.

“We realised that this increases the cost of agri-inputs manifold and the profit realisation for the farmer decreased drastically. This pain point gave rise to the idea that there must be an end-to-end decision support system for the farmers that can provide early-stage pest and disease diagnosis,” he explains.

Upon further research, Amandeep and Rishabh found that drones mounted with imaging spectrometers (hyperspectral cameras) can play a critical role in acquiring the right data at the right time.

They collaborated with Dr KD Singh, who was then a post-doctoral researcher at the University of California, Davis. He helped them analyse the data and helped build proprietary spectral vegetation indices which played a vital role in the early diagnosis of the crop issues like pest attacks, disease outbreaks and nutrient deficiencies even before any visible damage.

The agritech startup currently provides drone-based advisory services to nearly 6,000 farmers in Uttar Pradesh and Rajasthan – of which almost 20 percent purchase agri-inputs from the company.

The founders say this relationship enables the startup to implement sustainable farming practices and track every farm activity on the ground. Consequently, this ensures that the farm output meets the quality parameters of the buyers as BharatRohan also procures farm produce from the same farmers, and supplies them to the major retail chains, FMCG players, masala makers and exporters based in India.

The startup also provides agri-advisory services in the pre-sowing and intercultural operations stage of the crop life cycle on farmers’ fields.

“Farmers working with BharatRohan have increased their crop production by 15-20 percent while saving 215,000 litres of water per acre per season, which helped farmers to increase their profit margin substantially,” Amandeep claims.

Registered in Delhi, BharatRohan has its corporate and regional offices in Lucknow and Hyderabad, respectively.

The startup has a team size of 20 members currently.

Having a strong technical background, the founders developed a product offering that provides data to prevent pest attacks and reduce crop loss. With data timely acquired through drones, the startup enables farmers to practice precision agriculture.

While the farmers were initially intended to pay for data, the team pivoted to a model that offered a comprehensive procurement platform to institutional buyers with traceability as the key-value addition. The solution is vertically integrated and offers farmers and FPOs (Farmer Producer Organisations) access to markets through buyback arrangements. The paying customers get access to pesticide and residue-free agricultural commodities, along with a farm traceability platform.

The company is tapping into export market demand as well as providing ‘Fair for Life’ certified farm products, which can offer higher margins for the startup as well as the farmers.

BharatRohan has raised around Rs 3 crore to date in a mix of convertible notes, grants (supported by Biotechnology Institute of Research Assistance Council (BIRAC), set up by the Department of Biotechnology (DBT), Government of India) and equity (Upaya Social Ventures, and Acumen Fund Inc).

The startup generated a revenue of around Rs 6 crore in this fiscal year. The company has demonstrated a positive EBIDTA.

According to a report by Markets and Markets, the agricultural drone service market in India is sized at $1.2 billion in 2020 and is expected to grow up to $5.7 billion by 2025 at a CAGR of 35.9 percent from 2020 to 2025. This growth is attributed to the exemptions of drone operations by the US Federal Aviation Administration (FAA) for aerial data collection, leaving a wide space for Indian aerial data to flourish.

BharatRohan plans to strengthen its foothold across Rajasthan and Gujarat, and scale to servicing more than two lakh acres of land in the next 18 months.

“This will help our partner farmers save more than Rs 400 crore worth of agri-inputs and crop losses collectively. It will boost our efforts in building a sustainable and traceable supply chain for seed spices. This will also augment our drone/UAV based spectral imaging technology to offer alerts and forewarning to spice seed growers as well as incentivize them for the pesticide residue-free cultivation of crops like cumin, coriander, fenugreek, carom and fennel,” says Amandeep.

“We will also be boosting climate resilience in our package of practices. We will use the recently raised seed funds to fuel the sales engine to sell more than 7,000 MT of these commodities to domestic and international clients belonging to modern retail, FMCGs and grinders and we plan to earn a revenue of Rs 100 crore in the next two years,” he adds.

BharatRohan faces competition from domestic players including BharatAgri, Gramophone, DeHaat etc, while globally, it competes with the likes of IndigoAg.