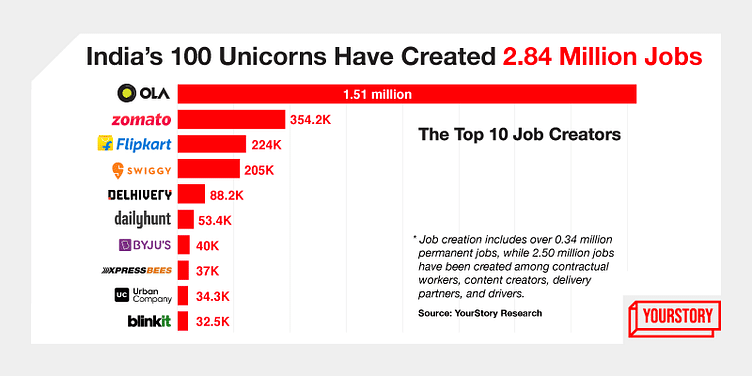 Any startup ecosystem needs the right milieu to flourish and the past six years have provided just that, leading to the creation of millions of jobs in India.

Even as India raises a toast to its 100 unicorns for giving jobs to millions, it’s important to recognise the role played by infrastructure developments—especially, low-cost data and the united payments interface (UPI)—in making this possible.

In the six years since Prime Minister Narendra Modi’s government set up the Startup India initiative, a combination of factors has helped some of the brightest minds in the country to successfully set out on their journeys towards entrepreneurship.

These startups, recognised by the Department for Promotion of Industry and Internal Trade (DPIIT), under the Ministry of Commerce and Industry, were responsible for job creation in excess of 7.07 lakh­. This is a huge jump from the 48,000 recognised startups that employed close to 5.50 lakh people until June 2021.

But what has really helped move the needle is the 2016 launch of the Unified Payments Interface (UPI), the brainchild of the PM Modi-led National Democratic Alliance government.

In a February 2021 report by UBS Securities Asia, analysts pointed out that the Indian government had launched the UPI-based payment system with no merchant discount rate, or MDR.

The same report pointed out that UPI in India processed 11 billion transactions with an annualised gross merchandise value (GMV) of $373 billion in 2020, compared with $287 billion in 2019.

And the numbers have only grown since. As of March 29 this year, the National Payments Corporation of India (NPCI) recorded UPI transactions worth $1.09 trillion (or Rs 83.45 lakh crore) in FY 2022, far exceeding the Rs 41 lakh crore reported during FY 2021.

Undoubtedly, UPI has been a strong catalyst for tech startups providing internet-based products and services to consumers beyond the metropolitan cities.

Growing internet penetration has also helped Indian startups grow beyond metros and Tier-I cities. TRAI (Telecom Regulatory Authority of India) data reveals that India has more than 1.14 billion wireless telecom subscribers as of March 2022. Of this, urban subscribers stood at 624.23 million, and 517.86 million subscribers were from rural India.

Internet penetration has also been aided by sustained government efforts to bring down the average cost of data which stood at Rs 11.78 per GB during the year 2018, compared with Rs 226 per GB in 2015, according to an August 2019 analytical report on wireless data service in India by TRAI. In 2020, the data cost reduced further to Rs 10.9 per GB.

Lower data cost and cheaper smartphones have enabled drivers and delivery partners to join the startup workforce in big numbers.

SoftBank’s results could bring defence to the front

The job creation has had its own positive multiplier effect on poor households too. A survey-based research report from Tata Institute of Social Sciences (TISS), Hyderabad, titled Understanding food delivery platform: Delivery persons’ perspective highlighted that there is not much difference in the average net income of delivery partners whether working full-time or part-time.

To explore the question of dignity at work for delivery persons, TISS Hyderabad researchers asked the delivery partners about the way their family perceived their work. And, 56 percent of the respondents gave a positive response. Clearly, job creation for such households has a strong potential to uplift them from poverty and also improve their living standards.

Coming back to the 100 unicorns of India, these companies are clearly on a fast track with a combined valuation of $331 billion and a cumulative fundraise of $62.9 billion since 2011. While 2021 saw a record 44 startups join the elite billion-dollar-valuation club, in 2022 we already have 15 new entrants to the coveted unicorn club to date.

And their numbers are only predicted to increase as venture capital firm Iron Pillar claims that India is on track to have over 250 unicorns by 2025.

The burgeoning startup ecosystem, along with the rising number of unicorns, would only aid PM Modi’s Aatmanirbhar Bharat ambitions.