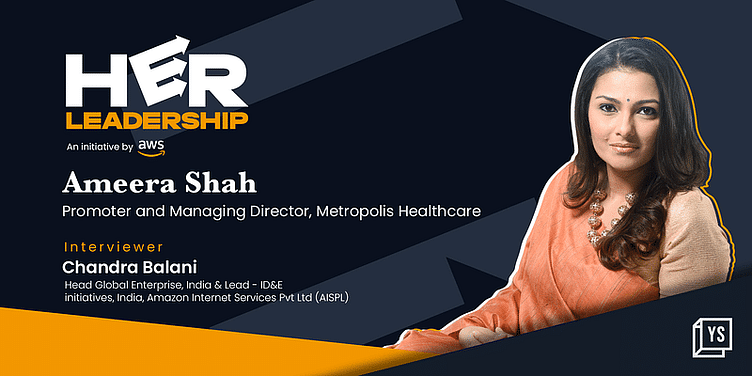 Ameera Shah shares her two decade-long journey in the diagnostics sector and what she envisions for the future in the latest episode of ‘HER Leadership’ series.

“If all of us Indians leave the country, we really don't have a choice to complain about it, and I felt like coming back and giving back to the country in a positive way,” Ameera Shah tells YourStory, participating in the ‘HER Leadership’ series.

From a single pathology laboratory to a fully integrated multinational chain, Ameera Shah has revolutionised the pathology industry. The Managing Director and Promoter of Metropolis Healthcare has spent the last two decades in changing the face of the diagnostic sector from being a doctor-led practice, in an extremely unregulated, competitive and fragmented market.

After completing her education overseas, Ameera started working at investment bank Goldman Sachs. While the opportunity was lucrative in every sense, it did not leave her fully satisfied, which eventually led her to join her father’s pathology business.

Having seen her doctor parents build their own practices, Ameera knew from an early age that healthcare in India holds immense potential. Talking about her journey, she says, “Initially it was all about strengthening what we actually had – good service, global quality, incredible experience, and the widest test menu in India for patients and doctors. And that became our USP and then taking that to many other cities outside - Mumbai became our go to market.”

Powered by AWS, Chandra Balani, Head Global Enterprise India & Lead - ID&E initiatives, India, AISPL. The ‘HER Leadership’ interview series captures stories of struggles and success of India’s most successful and prominent enterprise business leaders, and hopes to become a platform that inspires girls and women to join and move ahead in the workforce.

From a “small-town girl” to the MD of Warner Bros. Discovery, meet media maverick Megha Tata

Building a business at the tender age of 21 came with its own set of challenges. As a young leader, it was tough for her to earn the due respect and credibility at the start of her business.

The perception of being the boss’s daughter and pursuing a ‘hobby’ by assisting her father in his business was tough to break initially, but with her perseverance and strong leadership skills, Ameera was able to move past that barrier successfully.

Another obstacle she had to overcome was when she realised that Metropolis needed to up its game with respect to technology and innovation; which in retrospect became the top change Ameera would make in her business early on.

“Not having that solid bedrock of technology and not investing in the right people early on truly came back to bite us. Technology keeps changing and the reality is that technology, more than anything else, is the hardest thing to undo and redo,” she adds. With appropriate changes and upgrades in the tech department, Metropolis is currently powering through this never-ending journey.

The pandemic brought with it a new set of trials and tribulations. The pressure from all ends was enormous for Ameera and added to it was the role of being a new mother.

Taking care of a newborn while working 14 hours a day to build her empire was tough but her never-say-die attitude and fighting spirit kept her going strong. “Our own employees were sick, everybody was in a hurry, everyone was anxious, the rules were changing by the hour, and in the event of non-abiding the rules, or if there was a delay in implementation or failing to feed in the data in the government app due to technical glitches, private labs like us were given show-cause notices from the local authorities citing non-compliance. It was a very tough time,” she recalls. However, it was a strong team led by a strong leader that together fought the challenges and emerged victorious for all to see.

Having enjoyed its fair share of accolades and successes, Metropolis is one of India’s leading and only multinational chain of diagnostic centres with presence in Sri Lanka, Uganda, Zambia, Kenya, Mauritius, Tanzania and Ghana.

Ameera has been the recipient of many awards celebrating her leadership skills, but it was the EY Entrepreneur of The Year 2022 award which holds a special place in her heart. “I have always been vying for this award and I bagged it the same year when I had my baby and spearheaded my company through COVID,” she fondly shares.

For Ameera, spearheading the first-ever acquisition in pathology in India, securing her first funding, and taking her company public have been some of her most significant milestones.

However, one of her most difficult challenges and thus her most cherished achievements, happened in 2015 when she took on a personal debt of almost Rs 600 crore to acquire the share of one of the private equity investors in the company. “It was a huge risk but that risk paid me back multi-fold – not just in terms of financial wealth, but also in terms of confidence. To take the kind of punt on yourself and come out on the other side successful gives you a sense of confidence that propels you to do many more other things,” she proudly shares.

Ameera Shah of Metropolis speaks about her journey of becoming a global leader in the healthcare industry from YourStory Media on Vimeo.

Metropolis is currently undergoing a complete digital transformation which includes changing the backend architecture, redesigning the core, and building an API-led architecture that allows them to be more agile.

“The industry is going through some structural changes, there will be a humongous opportunity for pathology and healthcare in the next 10 to 20 years,” adds Ameera. Metropolis is also gearing up to target Tier II and III cities along with investing in the digital sector to provide e-commerce-like delivery experience to customers.

Metropolis boasts of a diverse and inclusive workplace, with a women workforce strength of 50 percent. The company constantly encourages its women employees to take up leadership roles.

A philanthropist at heart, Ameera truly believes in giving back to the society. As part of her future plans, she aims to uplift those who are in a more vulnerable space with a lack of resources. “I would like to be remembered for the social impact I am able to make. If I’m able to pay it forward in every aspect of life, that would be the true definition of success for me,” she shares.