From a “small-town girl” to the MD of Warner Bros. Discovery, meet media maverick Megha Tata 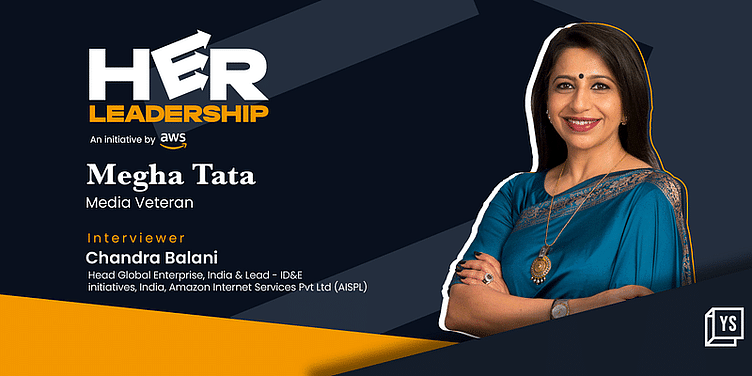 An exemplar of grit, glory and gumption, the former Managing Director of Discovery Communications India narrates her tale of struggles and success, leadership lessons, and her thoughts on diversity and inclusion.

A passionate media professional, an adrenaline junkie, a “wannabe biker”, and a staunch believer of spirituality – Megha Tata is recognised as the ‘top 50 influential women in media, marketing and advertising’ with an illustrious career spanning over 30 years.

While the media landscape transitioned from traditional to digital, this media veteran took on the mantle of leading Discovery Communications in India and launching their OTT outlet, Discovery Plus in her most recent professional engagement. She is also the second woman after Pheroza Bilimoria to head the India chapter of the globally renowned International Advertising Association.

Speaking with YourStory, as a part of the ongoing HER Leadership series, Megha shares her insights on varied experiences that have shaped her worldview, her learnings over the years, and the importance of women stepping up in the business world.

Powered by AWS, the conversation was steered by Chandra Prakash Balani, Head of Global Enterprise India and Lead - ID&E initiatives, India, AISPL. The HER Leadership interview series captures stories of struggles and success of country’s most successful and prominent enterprise business leaders, and hopes to become a platform that inspires girls and women to join and move ahead in the workforce. This episode is a part of Season 2 of the ongoing series.

The perpetual learner: Barclays’ Uma Krishnan lives by her life mantra of pushing the boundaries of your potential

A look back: Journey full of twists of turns

Megha’s professional journey has been punctuated with numerous accolades. She took on the role of senior vice president at Star India, and subsequently, senior leadership positions at Turner International India, HBO India, BTVI, before moving on to her role at Discovery Communications India. Prior to stepping down from Warner Bros. Discovery, Megha spearheaded the team that launched Discovery+ during the pandemic.

“From the time I started my career, which were the days of Doordarshan, to being a part of the team who brought cable and satellite into the country – I have seen massive tectonic shifts in the industry. Back then, I didn’t know that I was being a part of a historical shift,” says Megha, reminiscing about her three-decade long journey.

Early on in her career, when Megha was heading the sales division for a large organisation, she was expecting her first child. At the peak of her career, her all-male leadership discouraged her from taking on too many professional responsibilities, and demoted her.

“I had all kinds of emotions, and I hated myself for crying in front of them. They told me that I needed to spend more time with my child, so I wouldn’t be able to travel or focus my energies on work. That was heartbreaking to another level and I had to begin once over, whereas my peers had gone far ahead of me,” she recalls.

“It’s a moral responsibility of women who are in a position of power to speak up and share their stories. It is critical that they share their failures and struggles, both in the personal and professional space, so that others take cues from them,” she adds.

Megha also feels that women also need to start believing more strongly in themselves and their choices, and shouldn’t be apologetic about “not being perfect” in all roles they play.

Despite a journey that has taken her places, Megha still considers herself to be a “small-town girl who had dreams in her eyes” when she moved out from her hometown to build a career.

Her father, who was an Air Force officer, travelled the length and the breadth of the country, and she credits that experience as the basis of her strong foundation of being a team player.

Championing inclusivity is a top priority for her and she is a firm believer of rallying the team together. Megha also believes in being open and transparent, and acknowledging weaknesses.

She also speaks about the importance of having clear communication skills because it's critical for leaders to be able to communicate with the teams at large, so they understand the overall thinking of an organisation.

“I have a long way to go. I think if I can be remembered more as a person, for who I am, than the designation I have, is where I would say I had a life well-lived. Even if it's a small, positive impact I had on somebody; that's something I'd be happy to be remembered as,” she concludes.