Courage, values, actions, impact – how to succeed on the bumpy road to creativity 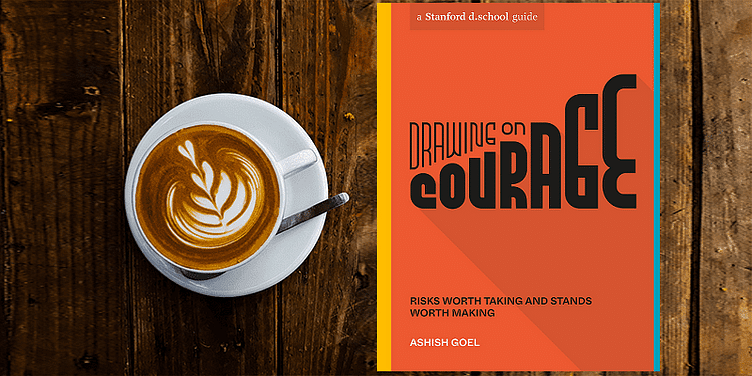 Everyday moments of creative work can be plagued with fear and risk. So what does it take to be courageous? This book explains how to move past fear and inaction to success.

Frameworks and tools for the creativity journey are beautifully described in the compact 130-page book, Drawing on Courage: Risks Worth Taking and Stands Worth Making, by Ashish Goel. The messages are also conveyed through comics illustrated by Ruby Elliot.

Ashish Goel is a designer and entrepreneur. A former teaching fellow at Stanford’s d.school, he was also head of design at Zomato.

Here are my key takeaway from his compelling book, summarised as well in the table below. See my reviews of the related books Experiencing Design, Design Your Thinking, Creative Confidence, Trillion Dollar Coach, Creative Thinking Handbook, and Innovator’s DNA.

Check out YourStory’s d.Zen (‘Design Zen’) section for more articles, interviews, book reviews, and conference coverage on design thinking, and our ‘8 Is’ Framework for Design Thinking.

“Courage is the precursor to all change,” Ashish begins. The creative journey of designers and innovators calls for unblocking fears, standing up for values, and rising to the occasion. Fear of uncertainty and embarrassment can come in the way.

Even the best designers need to stand up for their principles, successful managers need to have tough conversations, and writers need to show early drafts that may be embarrassing. All these creative acts call for courage.

“Courage is making the leap when you must – not when you’re ready,” Ashish adds. He cites two kinds of courage: epic courage (one momentous act) and everyday courage (lots of little actions).

“Everyday courage is the fuel for your ingenuity and the midwife of your integrity,” he describes. One chapter explains the four challenges in the creativity journey – fear, commitment to values, action, and responding to the consequences.

Taking risks ramps up fears of ridicule, failure, hardships, and uncertainty. “Failure has consequences, and fear sometimes points them out,” Ashish explains.

“Courage and fear are dance partners,” he evocatively adds. “Fear is the first stop on our creative journey because it wants you to stop right at the beginning,” he writes.

To deal with fear, Ashish advises unmasking fear, getting used to it, or removing it altogether. Fears should be identified and described in terms such as irrelevant, baseless, mortifying, or scary. Worst case scenarios can be visualised as well.

In many creative activities, it is inevitable that early prototypes will be incorrect, so it is better to get used to this. One must even be willing to do “bad work” in the beginning. Regularly taking small risks like exposing creative works to the world can help deal with such fear, Ashish suggests.

Having a backup plan can help remove fear, as seen by many entrepreneurs’ side projects. Recruiting others to the cause or harnessing communities for collaborative work is another option, as seen in the actions of architect-environmentalist Naresh Narasimhan.

He posted a video of himself advocating for the environment, and this led to a movement for the cancellation of a harmful steel flyover project in Bengaluru. This empowering action was described in Naresh’s talk at a DesignUp conference

Leaders can create conditions of psychological safety to remove fear of rejection by employees during innovative activities. Such a “low-fear high-courage environment” helps employees to speak up and even spar in healthy debates.

“Courage is when you act not without fear but in spite of it,” Ashish affirms.

Values help give direction and spine during tough times. It is important to be aware of one’s values and stick to them, Ashish explains. One’s motivations can be a combination of factors that are external (world vision) and internal (truth).

Plotting fear and risk of actions in a two-dimensional graph can help clarify one’s values and commitment to them. Epic courage involves high fear and high risk.

“To be courageous, you must yourself bear the potential consequences of your actions,” Ashish affirms; this can be a challenge when you don’t know how things may play out.

For founders and creators, the origin story is important in this regard. Questions to reflect on include: What value was I trying to create, What do I gain if I quit, or What do I lose if I keep going?

Empathy, prototyping and storytelling are some ways of advocating change in an organisation, Ashish describes. For example, IDEO sometimes comes up with two variants of a project to illustrate impact.

Writing a blogpost or op-ed are other ways of expressing positions and courage. Gut-based creativity and data-driven evidence can be effectively combined as well.

Despite preparation, the moment of action can still cause nervousness, anxiety and fear. Inaction or even “fake actions” can happen at this stage. Some actions are irreversible, others have the possibility of recovery.

Having an opportunity mindset rather than a threat mindset helps in this regard, according to Ashish. Designing a slogan or mantra can be effective in this stage, if it is memorable and usable.

Such a battle cry can have physical accompaniments like making a fist or an imaginary visualisation like putting on a coat. There could be spiritual connotations as well.

Ashish advises steps like framing feelings, articulating positions, tactful communication, and figuring out a way ahead. This can help while having difficult employer-employee conversations as well, Ashish describes.

Courageous action opens the door to new possibilities. “The last leg of the courage journey is more like a perpetual refueling and retooling station than an end-point,” Ashish describes.

The action taken may have the right, wrong, or unintended consequence, or even no consequence. “Failures, mistakes, and missteps are all inevitable parts of the courage journey,” he cautions. This can lead to loss of time, money, reputation, and courage.

“Reframe to recourage,” Ashish urges. It helps to change perspective and capture learnings as “bad time stories” in an optimistic rather than pessimistic tone.

Innovators who pursue the journey of courage “discover muscles they never knew existed”, Ashish describes. Examples include economics student Ben Knelman, who took a d.school class and stumbled upon the opportunity to create a savings-habit app for janitors. This eventually became the microfinance company Juntos.

“What begins with an awkward moment can become an impactful contribution to the world,” Ashish affirms. He advises looking at one’s own early creations and career, and reflecting on the journey till the present to assess what progress has been made.

Other challenges along the way include sunk cost fallacy, which also takes courage to break. “Courage is both accepting what you choose and trusting that you can change course later if you need to,” he explains.

“The next moment for courage is right around the corner, if not staring you in the face right now,” Ashish signs off.

In sum, this is a valuable and inspiring book for all those involved in creative pursuits – from designers and writers to entrepreneurs and corporate innovators.