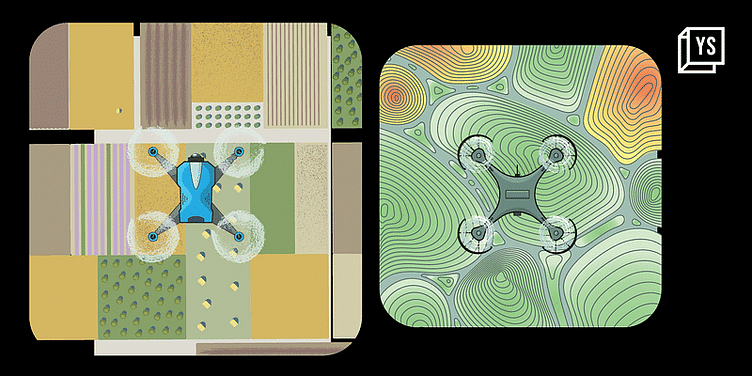 The Indian government is spearheading an infusion of business in the drone sector by providing tenders up to Rs 120 crore each, across industries as varied as surveying, agriculture, mining, and defence.

Drone startup Aereo, formerly known as ﻿Aarav Unmanned Systems﻿, was founded by IIT Kanpur students in 2013. For the first eight years of its existence, it had to fight tooth and nail to drive commercial growth.

However, since August 2021, Aereo has experienced an 800% increase in orders. This sudden jump can be largely attributed to policies promoted by the government.

From clarifying the rules for private contracts with the release of the Drone Rules last year, to providing financial support via the (production-linked incentive) PLI scheme, the Centre has been supporting drone startups.

The biggest push has come from the government’s decision to start issuing multiple tenders worth tens of crores of rupees each for drone services.

For the tender-winning startups, these contracts have led to big dreams coming true. Bengaluru-based Aereo has seen its company grow from 50 to 240 employees in the last year and a half. Currently, it is in the process of becoming a global entity, with aims of replicating its work in India abroad.

Other startups, such as Delhi-based ﻿Omnipresent Robot﻿ Technologies and Chennai-based ﻿Garuda Aerospace﻿, exclusively told YourStory that they are considering going public in the next couple of years.

"A lot of drone companies are thinking the next two to three years are a good time to go public,” says Aakash Sinha, Co-founder and CEO of Omnipresent.

ideaForge, one of India’s oldest drone companies, is also reportedly planning an IPO within the next few months. The company was unable to participate in this article by the publishing deadline.

At an event in May, Prime Minister Narendra Modi exhorted the values of the drone sector. At the same event, Civil Aviation Minister Jyotiraditya Scindia said he believed that India would “become a drone hub by 2030.”

This is a novel stance for the Indian drone industry, which has been toiling in anonymity for years due to unclear regulations. The change started in August last year, when the Central government announced the Drone Rules, 2021.

Simultaneously, the government introduced a PLI scheme for drone and component manufacturers worth Rs 120 crore. Approved startups would receive a 20% incentive based on their value-add into the ecosystem.

The industry has grown so rapidly in the last 12 months that the government has needed to increase this number to Rs 240 crore already.

According to Ahfaaz Jessani, an associate at venture debt fund BlackSoil Capital, which has invested in ideaForge, “the liberalised regulations bode well for the 200 startups [that are] part of the Indian drone ecosystem, and will go a long way in facilitating investments in drone technology in India.”

In addition to increasing awareness around the sector, Aereo’s CEO and Co-founder Vipul Singh believes that ease of business in the segment has improved.

“The effort required to execute a business today is almost negligible,” he says. “Because there is a clear-cut demarcation of what can be done and what can’t be done, one can systematically plan the growth journey, which was very uncertain earlier.”

However, in terms of pure revenue and growth, the government’s biggest contribution has been multi-crore government tenders.

In 2020-21, the Indian drone sector reported an industry-wide turnover of Rs 80 crore. Today, the Central government is issuing tenders from multiple departments, with occasional projects even crossing the Rs 100 crore barrier.

“We are looking at contract sizes ranging from Rs 3 crore to Rs 50 crore in a single tender being floated right now,” says Vipul of Aereo. “[Projects include] a big mining PSU trying to use drones for a limited number of mines to a Central government department looking to map an entire state.”

However, Aakash Sinha, Co-founder and CEO of Omnipresent, believes that this is just the start of government spending for the drone industry.

He predicts that the survey and mapping tenders alone will be worth a total of between Rs 4,000 crore and Rs 5,000 crore in the next 2-3 years, evenly split between the SVAMITVA (Survey of Villages And Mapping with Improvised Technology in Village Areas) scheme, and land survey mapping (LSM) government projects.

These two make up the bulk of the government drone projects today. The SVAMITVA scheme aims to map 6.6 lakh villages across India to ratify property records, while the LSM projects aim to replace traditional satellite and laser mapping of India’s land mass with the higher precision of drones.

According to Vipul, drones are replacing the older technologies because they “are executing the same task in one-fourth the time, and at one-fourth the cost.”

However, while the overall numbers may seem large, the per village and per square kilometer prices explain the government’s largesse.

Aakash revealed that typical survey mapping tenders allocate between Rs 3,000 to Rs 5,000 per village, with the villages around 0.2 to 0.3 square kilometres in size. LSM projects tend to be cheaper, with tenders valuing the per square kilometre cost at between Rs 7,000 and Rs 10,000.

For the more linear and technical mapping projects, such as road construction or oil pipelines, the costs are calculated on a per kilometre basis and can vary, but are generally higher, according to Aakash.

The genius behind these tenders are the extension stipulations. Tenders are granted for 12-month periods, and can be extended at the same rate once they are completed. Considering the survey and mapping work will take at least another few years, companies will be locked into price-controlled but increasingly larger public projects.

However, this is a commercial contract that benefits everyone. Aereo, for example, has seen an 8X growth in its orderbook since August 2021, and an 11X growth in its pipeline.

Additionally, government tenders outstrip private projects in total value today, with Aereo stating that their contracts with the latter are between Rs 3 crore and Rs 5 crore, and Omnipresent placing theirs at Rs 6 lakh to Rs 7 lakh per month.

BlackSoil’s Ahfaaz says that while the government policies are a welcome step and have caused a favourable funding climate, “drone manufacturing is an investment driven business.”

While the tender sizes may indicate that there is enough work to go around, not all startups are chosen. As Omnipresent’s Aakash explains it, companies have to prove their drones in a small test before they can be eligible for a tender, and despite dozens of applications only 3 to 4 companies pass the technical requirement per tender.

Additionally, with the empanelling of certain drones that can be used for all tenders from a certain department, companies like Omnipresent are deepening their technical advantage. Other startups are incentivised to use their drones, even if they win the tenders separately.

As Aakash says, these third-party tender bidders are “an extra marketing and sales team. If they get work, they can use [Omnipresent’s empaneled] drones,” describing the development as “guaranteed revenue.” He estimates that only around 10 drone models have been empanelled by the government for technical proficiency.

However, the government spending has also indirectly opened up other revenue sources.

For Garuda Aerospace, only 35% of its business comes from government tenders, but Founder and CEO Agnishwar Jayaprakash believes that his company is well positioned to hit multiple unique financial targets.

He told YourStory that Garuda is looking “to go [for an] IPO by 2024, after achieving the unique status of becoming India’s first drone unicorn startup.”

Agnishwar’s confidence stems from the strong government policies that have provided Garuda the platform to build a private business. Not only is Garuda one of the few companies to have a drone empanelled for government tenders, but also saw the public-backed Agri Infra Fund subsidise its drones sales to small regional agri-services companies.

This has helped the company build a base of private contracts, including multiple non-government drone survey deals, as well as the export of 4,000 drones to Africa earlier this year. According to Agnishwar, the manufacturing and sales of drones to meet demand is a focus, with Garuda’s “main aim” to be the production of 600,000 units by 2025.

Aakash agrees with this sentiment, saying that demand is now outstripping supply, which is why he believes that drone startups will file for IPOs soon.

“Last year, this industry was very small…we have more work than we can handle right now,” he says. “There is a positive wave around drones because we’re in the midst of growth.”