A new way to sell EVs 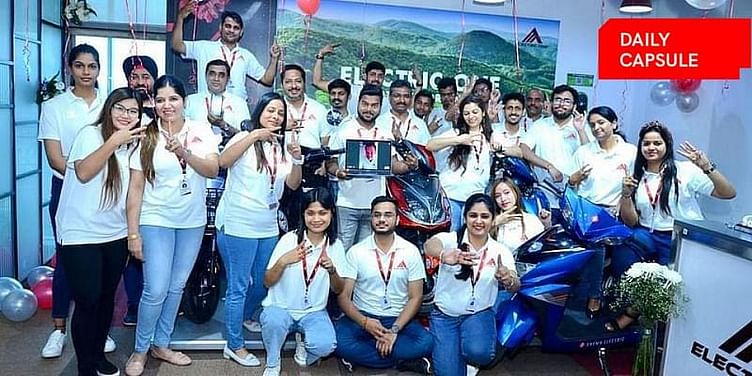 Started in 2020, Gurugram-based Electric One currently has over 82 outlets across India, and plans to increase this count to 300 by the end of FY23.

The markets were at rest yesterday but today is the second day of the Electronics Mart IPO, which received a warm response on Tuesday as it was fully subscribed 1.69 times. The 42-year-old company is looking to raise Rs 500 crore through fresh issue of shares in the price band of Rs 56-59 per share.

YourStory is all set to release its final cohort of 100 challenger brands through Brands of New India’s "500 Challenger Brands" initiative. If you think your startup has the capability to revolutionise India's D2C ecosystem, apply here.

ICYMI: A Chinese vase worth $1,900 was sold for $9 million after buyers were convinced it was a rare artefact.

Well, anyone wants to bid for a couple of 'rare' crystals? They're quite 'antique' and were definitely not purchased during the festive season sale. 😉

Here’s your trivia for today: Which district in India became the first to attain full literacy?

A new way to sell EVs

While electric vehicles are gaining adoption in the Indian market, EV sales still account for a fraction of total automobile sales due to either the lack of EV infrastructure, consumer awareness, trust deficit among riders, or all of the above.

Enter ﻿Electric One﻿. It operates multi-brand retail stores for EV two-wheelers on a franchise model and sold 3,225 electric two-wheelers in FY22.

Began as a WhatsApp group for mothers, Mamma-Miya is an iOS-only app that works as a digital planner for working mothers, helping them achieve work-life balance.

"By helping mothers strike a better work-life balance across all the different roles they play, we make them feel more balanced, productive, and fulfilled,” shares Co-founder and CTO Namrata Mayanil.

Trouble in paradise for OYO

IPO-bound ﻿OYO saw its﻿ valuation dip to around $6.5 billion in the private market following reports of a markdown of the valuation of the hospitality and travel-tech firm by SoftBank.

Following reports of the markdown of OYO's valuation by SoftBank, the company's valuation reportedly dipped by nearly 13% to Rs 81 per share—from Rs 94 per share updated in DHRP last month.

Which district in India became the first to attain full literacy?

Answer: In 1990, Ernakulam district in Kerala was declared the first to achieve 100% literacy in India. Out of the top 10 literate cities in India, five are in Kerala.