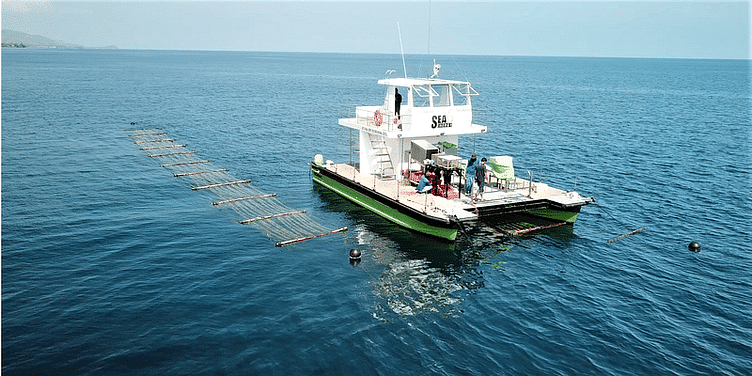 Bengaluru-based Sea6 Energy is cultivating industrial amounts of seaweed that can be used as biofuel, bioplastics, and much more.

In the 1970s, as the world went through a crude oil crisis, America commissioned its scientists to come up with alternative fuels. The world already knew that biomass, the organic remains of any animal or plant, could be processed into biofuel.

However, the problem was we didn’t have enough land to cultivate plants that can be turned into biomass. As a result, the scientists turned to the oceans for a solution, and found that seaweed could be an excellent replacement.

Shrikumar Suryanarayan, co-founder of Bengaluru-based ﻿Sea6 Energy﻿, explains that if you can crack seaweed farming automation, there is more than enough space in the oceans to plant enough seaweed to replace India's crude oil needs. India is the world's third-largest importer of crude oil.

“Our calculations indicated that we only needed about a 120,000 square kilometers [to replace India’s crude oil imports],” he says. “That is approximately the area of India’s exclusive economic zone around Andaman and Nicobar.”

Shrikumar has reason to be optimistic. While everyone else is still attempting to figure out how to scale seaweed cultivation, Sea6 has been running an automated seaweed farm off the coast of Indonesia since 2019, backed by a couple of patents and a published study validating its work.

Sea6 Energy was founded by ex-Biocon President of R&D Shrikumar, alongside IIT Madras alumni Sailaja Nori, Nelson Vadasseri, and Sowmya Balendiran in 2010. The company was started to solve the existing manual cultivation process of seaweed.

Under the current process, seaweed is tied on to a wire “like a flower garland”. It is then tied to an anchor in calm, shallow water, and it takes about 4-6 weeks for it grow. It is then harvested by carefully pulling off the overgrown seaweed before restarting the process.

This method is time-intensive and back breaking, and also holds the danger of having a turbulent tide or storm breaking apart the seaweed while it is tied to the wire in the water.

The company spent years working primarily on this engineering problem. Within half a decade, it had a working theoretical solution, and by 2019, it deployed the Sea Combine, or its “lab on the sea”, as Nelson describes the invention.

Instead of a single string, Sea6 created an automated machine that places the seaweed in a cylindrical ‘tubenet’. This tubenet is then tied to anchors along the farming site, and the Sea Combine is able to automatically harvest excess seaweed when it has grown enough.

The tubenet reseeder technology, which is patented by the company, also protects the seaweed from the ocean’s turbulent movements.

As Shrikumar puts it, this engineering problem had countless questions that needed answers. “The rotating machinery [of the tubenet reseeder], there are so many quirks to this machine,” says Nelson. “There’s plenty of challenges there. That’s why it qualifies for the patent.”

“There are some others who are working on some kind of automated harvester in Europe, but theirs [Sea6’s] is definitely the one that’s most developed,” he says.

“They are the ones that have commercialised it, and it seems to be working… with the other [companies], I’m not sure how far those solutions are fully functional, or if they’re just a prototype,” he adds.

While Sea6 has figured out how to automate seaweed cultivation, it is now harvesting it in small amounts. The startup consumed 5,000 tonnes of seaweed this year, with a target of around 15,000 tonnes next year. Compared to its stated goal of replacing India’s crude oil imports, these numbers are miniscule.

However, Sea6’s problem does not lie in scaling up cultivation. Rather, the company needs to set up business functions to process large quantities of seaweed and turn them into a variety of products that can drive revenue for the startup.

The market for seaweed-based products can be broken up into a profit versus supply requirement pyramid. At the top of the pyramid, margins are high, markets are small, and relatively low amounts of seaweed are needed to make pharmaceuticals, cosmetics, and luxury food items.

As you go down the pyramid, you see market sizes increase, but alongside reductions in margins, there is a need for massive increase in seaweed supply. After basic food items come agri-inputs and feed inputs for domesticated farming, then come bioplastics, and finally the biocrude that can replace crude oil.

At current levels of seaweed cultivation, most companies are stuck selling in the first two levels of the pyramid, while Sea6 has been able to take advantage of its larger supplies to sell agri-inputs and feed inputs in twenty-plus countries since 2015.

However, according to Shrikumar, the volumes of seaweed needed to get into bioplastics at a price-conscious and sustainable level is 5,000X more than food ingredients, and 50,000X more for biofuels.

While Shrikumar remains optimistic and hopes to drop seaweed-based bio-crude processing prices to market comparable prices by 2025, Steven Hermans believes we won’t see a purely economic shift until at least the 2030s.

“You need to grow so much seaweed to make that a possibility and we’re not growing enough,” he says. “I understand that’s their [Sea6’s] goal, but it’s a long-term goal and 2030 is definitely too optimistic.”

One product at a time

Even if all the world’s seaweed was focused on biocrude product, Sea6 knows that current seaweed cultivation would have to go up by at least 10,000X to challenge the crude oil market. As such, the company is not placing all its eggs in a single basket.

Instead, Sea6 has started working its way down the pyramid. It launched agri products in 2015, with the vertical paying for itself today. The company has also started selling feed inputs for shrimp and fish culture, as well as immunity boosters for agricultural crops.

Earlier this year, the company raised $18.5 million in a Series B round from European investors BASF Venture Capital and Aqua-Spark. Sea6 said it plans to deploy that money towards the processing and business operations of making “sea vegetable fibres and jelly ingredients” that come under the food ingredients category.

With under a hundred employees, Sea6’s current challenge is to build and expand different verticals for the harvesting of seaweed by Sea Combines.

While the company has allocated the money raised from previous funding towards research of new products, it is currently focusing on developing business and operations expertise.

“We can’t forever be spending money on research and saying one day we will become big,” says Shrikumar. “We hit a profitable product with agriculture, and that has become a vertical. That also needs nurturing, and we’re a small company after all.”

Despite having just raised money, Shrikumar predicts the company will soon raise another round, and plans to use the money to increase seaweed farming, to invest in processing plants, to expand each vertical, and further expand its operations and research.

Currently, Sea6 does not have any global competitors that are aiming to build an end-to-end solution from automated farming to R&D and commercialised production. Shrikumar believes that Sea6’s patents will maintain that advantage regardless of any rival innovations.

“We were one of the early movers in the seaweed industry and we saw the potential of this versatile raw material in all these areas far before anyone else,” says Shrikumar. “We have all these patents on converting seaweed into bioplastic or food ingredients… [we can expand] when the appropriate funding round happens, without any fear that someone else will beat us to it.”

(The article was updated to rectify Sea6 Energy's co-founder name from Shrikumar Srinivasan to Shrikumar Suryanarayan.)