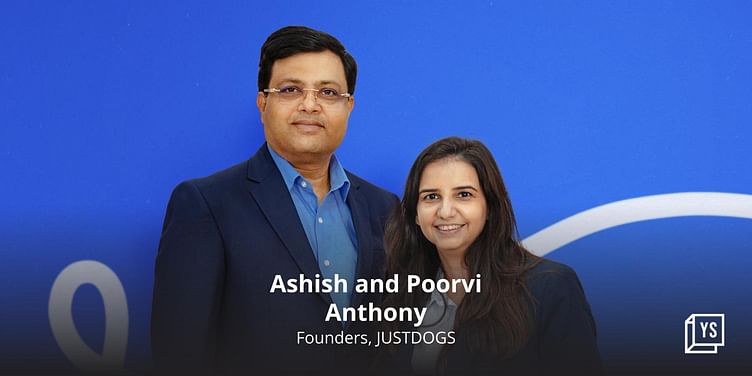 JUSTDOGS was founded in 2011 by Poorvi and Ashish Anthony. The pet care retail chain has close to 50 stores across India, over two million pet parents as customers, and a robust online presence.

For a child who had always longed to have a pet but was faced with the familiar ultimatum of “either the pet stays home or I stay”, Ashish Anthony has come a long way. He founded ﻿Just Dogs﻿, a retail brand with annual revenue of over Rs 100 crore, 16,000+ recurring customers, 50+ plus stores, and counting, across India.

But it all started with that first step he took in the 90s, while living on his own as a bachelor in Mumbai. Ashish found the liberty to get his first pet - a German Shepherd pup. At that time, as an employee of ICICI Bank handling the Western region, he didn’t think twice when he got a chance to move to Ahmedabad. In fact, he looked forward to a slower pace of life and more open spaces.

Once in Ahmedabad, Ashish married Poorvi, a corporate trainer and a fellow dog-lover, and the couple quickly went on to own six dogs – four German Shepherds and two Rottweilers. So passionate were they about their dogs that when the bank called him back to Mumbai, he was willing to put his career aside for the sake of his dogs!

“My basic reason for resigning from ICICI Bank was when my boss asked me to move to Mumbai. I couldn't move to Mumbai with six dogs!” Ashish recalls.

Besides being a pet parent, through all his corporate experience in the 90s and early 2000s, Ashish Anthony was doing one thing constantly – launching businesses. From Unilever to Shell, ICICI Bank and Barclays – Ashish’s roles in all these companies saw him exploring markets in the rural sectors and learning everything from FMCG to finance.

“Around 2010, when I was with Barclays, the banking sector, in general, was not doing very well. Barclays had put us out of reach of any other bank in India in terms of what we were getting paid, so even if I shifted to another organisation, it was not going to pay me what I was getting,” Ashish says.

When thoughts swirled around launching his own venture, it boiled down to what he knew best.

“I always felt that to get into any business, it is very important for you to like that business, know about it, and have some passion for it. Otherwise, it becomes very difficult for a first-generation businessperson,” Ashish says.

For Ashish, that passion lay in dogs. In 2010, a big gap that he saw in the market was the lack of choices in pet products – be it food or accessories.

“When I was made redundant from Barclays, I was trying to cut costs in many ways, but when it came to my dogs, I was not leaving out any expenses. That’s when I realised that those who were really shaukeen (passionate) about their pets, will spare no efforts in spoiling them,” he says.

Although Ashish was convinced, it did garner initial scepticism from friends and colleagues. “When we shared our idea with them, they were bemused, “why are you opening a pet shop?” The first thing that comes into people's minds when they think of a pet shop is a 250 sq ft dingy place with some dog food packs and leashes. We were convinced there was scope to change perceptions here, and bring some organisation into the chaos, and launched JUSTDOGS in 2011,” says Ashish, adding he is proud to claim that it is the first branded retail chain for pet products in the country.

Starting with a small store in Ahmedabad, JUSTDOGS earlier this year launched its largest retail store in the country – a 4,000 sq ft space in Thane, complete with a spa for pets!

“We started our first physical store in Ahmedabad, which many people said, is the last place in the country to start a pet business, as its demography boasts of Gujaratis, Marwadis, and Jains. When they hear of dogs – they connect them with non-veg, and they don’t want to do anything with dogs. But we saw this as a great testing place for what India as a market would be like too,” Ashish recalls.

He says while he knew the pet penetration in the state was really low, he didn’t perceive that as a problem. The issue, he felt, was awareness. “As we started to make people aware of the various products, our business started to grow. We did not have much money, so we went the franchising way. Our growth was through Gujarat, which is why every town in Gujarat has got a JUSTDOGS store,” Ashish says.

“The idea is to provide products and services that aid in the long, happy, and healthy life of fur babies. From food, toys, accessories, training, and grooming, we want JUSTDOGS to be a one-stop solution for all the lifetime needs of pets,” Poorvi says.

Why 2 entrepreneurs quit their corporate jobs to build a Rs 1.5 Cr petcare startup

When they started out, JUSTDOGS catered to every pet requirement except for health. From pet food to accessories, breeding dogs to training them, it was all part of the JUSTDOGS experience.

“We wanted to scale it much more, and picked all the scalable businesses that we could think of and started doing them offline. Since pet food is logistic-intrinsic, we wanted to make sure our business was hyper-local as well. Now, we are much more efficient as far as our costs for transportation of products is concerned,” he says. The firm currently has 19 company-owned branches and 22 franchisees across the country.

To provide 360-degree assistance in making the pet parenting journey better, the company has allied with partners to provide pet insurance and behaviour and training workshops.

“In the second phase of expansion, we will provide medically prescribed products from our store and app. The app will be a one-point solution for the complete history of the pet’s health, insurance, diet and growth trackers,” Ashish says.

A market for pets

“Rapid urbanisation, a movement towards nuclear family set-ups, double-income households, changes in lifestyle, and pet humanisation in recent years has played an instrumental role in rising of pet ownership across the globe. India is noted to be an active contributor to this league with a promising pet population of 32 million, which is growing at a rate of more than 12 percent annually,” the report noted.

Ashish agrees as he says he wants JUSTDOGS to be more than a transactional outlet, and sees the platform as a place where pet parents can come to get expert advice, discuss pet behaviour, seek guidance, and dwell in a sense of community.

Supporting them in this grand vision is a hand-picked team. “We have more or less built most of the entire retail team ourselves. Some time ago, it was only Poorvi and me handling finance, sourcing, expansion, and even pet services. After our first round of funding, we've got our next line of people.”

It also helps that the pet industry is a much-talked-about sector now, and there are genuinely keen folks interested in joining the industry.

“People are easier to find now. Also, when you’ve got money with you, you're able to pay people, and it’s easier to get whatever the right kind of people. In the pandemic, we were even able to hand out increments, because the pet industry saw a massive revival, and we were visible as a segment,” Ashish says. JUSTDOGS currently has an employee strength of 195.

Apart from the store, Poorvi and Ashish have also founded the JUSTDOGS Foundation, a non-profit for street dogs. Several projects, campaigns, and drives are conducted under this, including the Raksha drive (tying of radium reflective collars on street dogs), feeding sessions, vaccinations etc.

“We've always loved dogs, and as a child, since I was not allowed to have one at home, I would always play with street dogs. So I grew up with a lot of them. Even when we started this business, we always had a couple of dogs right outside the door, and by habit, I'm always looking out for them. We felt compelled to do something for street dogs, so we registered our foundation in January 2020,” Ashish says.

By 2025, JUSTDOGS plans to open 150 stores across the country. “In the next four or five years, we plan to touch Rs 1000 crores, where at least 35% to 40% of the business comes from online and the rest from offline. We are already close to 35% online right now,” Ashish says.

Elaborating on future steps, he says, “We are expanding to food brands with products in economy and premium segments. Besides food, there will be a strong portfolio to meet rising needs in the fashion and apparel segment via our own brand.”

“The rate at which the country's going, the rate at which the tech industry is growing, everything is an opportunity, perhaps a challenging opportunity. You just need to have the money and the plan to execute it,” says the first-generation entrepreneur whose simple childhood love for dogs translated to more than just that.