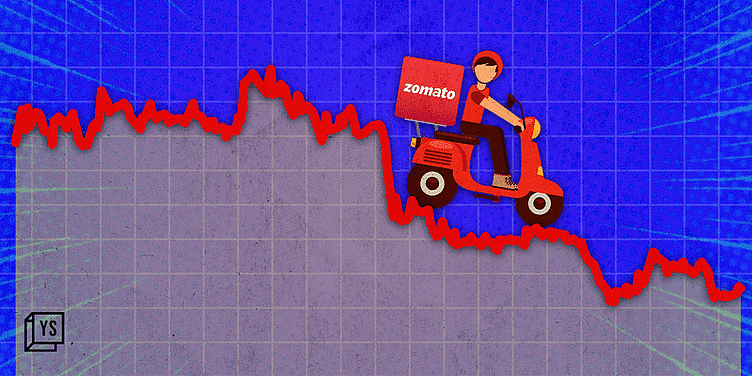 The share sale is expected to bring down Alibaba's stake in Zomato to 10% from 13%.

﻿Alibaba Group﻿, one of ﻿Zomato﻿'s biggest shareholders, will reportedly sell shares worth $200 million in the food delivery firm on November 30. The stake sale is expected to take place through a block deal at a discount of 5-6%. Investment bank ﻿Morgan Stanley﻿ will be the broker of the deal.

The Chinese ecommerce company owns a 13% stake in Zomato through its two subsidiaries, ﻿Ant Financial﻿ and Alipay. The share sale will bring down Alibaba's stake to 10%, the CNBC Awaaz report stated.

Zomato declined to comment on queries sent by YourStory.

From Nykaa to Paytm, India’s internet firms remain under pressure on the bourses

The development comes amid a whirlwind time for the food delivery giant, just days after it witnessed the third senior management exit in a month.

Co-founder Mohit Gupta stepped down last week after a four-year stint. He was followed by Rahul Ganjoo, who was the new initiatives head, and Siddharth Jhawar, former head of Intercity Legends service, who exited earlier this month. Gaurav Gupta, also previously a co-founder at Zomato, quit two months after the company went public.

﻿Sequoia Capital﻿, another major investor in Zomato, sold a part of its pre-IPO shares in Zomato in the open market in August this year, reducing its stake in the restaurant aggregator and food delivery platform to 4.4%.