This pseudonymous social network fails to create a sense of community 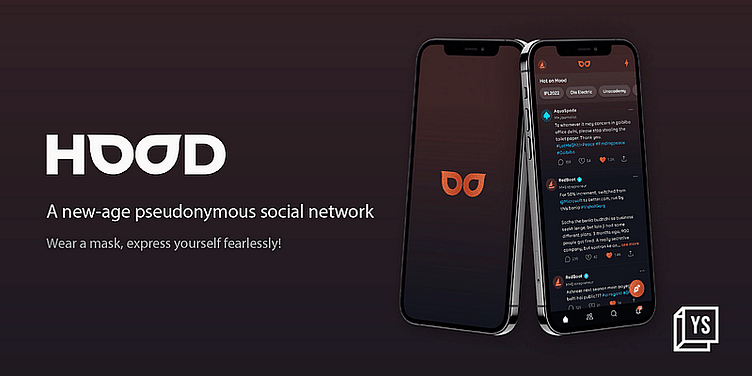 Hood is a pseudonymous social networking platform that aims to give users a safe space to express themselves, but often comes down heavily on ‘perceived’ women users.

The Mask of Zorro hid the face of the fictional vigilante of the same name, a masked hero who embraced anonymity to protect the downtrodden against the corrupt.

In December 2021, Jasveer Singh, Abhishek Asthana, and Deepak Kumar launched Zorro, a pseudonymous social networking platform that aims to give users a safe space to express themselves, without the fear of being attacked publicly on social media.

The renaming was done as the app shifted from individual expressions to community conversations. Jasveer has earlier stated that the name Hood retained the mysterious aura that was the original essence, “while also reflecting a sense of community, a virtual neighbourhood”.

Hood at present has more than one lakh downloads and a 3.8 rating on Google Playstore.

But what does the Hood really involve? And does it really enable pseudonymous social networking?

Once downloaded, Hood gives you a bit of a brief about what the app is about. The silhouette of a man, wearing detective-like glasses and a hat, pops up. The accompanying tagline - “Express Fearlessly” - says it all.

A phone number, followed by a one-time password, is all you need to set up an account. The app gives you a pseudonym as part of the account creation. Next up, you can select topics that interest you. These include Salary Comparison, DU Times, Behind Breaking News, and Embarrassing Office Stories, among many others.

Hood also seeks permission to access a person’s contact list, but this writer did not allow that. The app can also connect with your Twitter account, but what is the point of joining an anonymous app if one connects with their contacts?

The homepage offers posts from the topics that interest you; these posts are from individuals posting on the groups you follow.

The orange and black background is attractive, and the user interface is easy to use. Simply scroll to read posts and use the icons at the bottom to like, share over WhatsApp, and comment. The app is easy to use, but the constant notifications can get annoying.

The bottom bar helps in navigating the app. Click on the magnifying glass to discover more topics or other anonymous people, or new groups to follow. The groups icon takes you to a new page where you can scroll through multiple kinds of groups. The categories include companies, colleges, and general.

Thoughts can be shared by clicking on the pen icon at the bottom-right corner. A new update lets you add gifs and pictures to your posts.

Hood also has a ‘sensitive content’ disclaimer on certain pictures, which the app perceives offensive. The writer saw a few intimate photos tagged sensitive. The app runs a reward system, where you stand to earn Rs 20 each time you refer the app to a friend through WhatsApp.

Hood seems similar to Reddit, another discussion app where people can post their thoughts, but with an Indian touch.

There are groups discussing office stories, salaries, and passive income alongside groups focused on sexual problems or sex. The topics tend to become very similar unless you consciously try to find different ones.

For instance, if you click on office stories, the app will keep suggesting more such accounts unless you consciously change the topic. But this is not unusual for social media apps, which want to keep their users hooked.

People also communicate in Hindi quite often, using English text. This writer noticed that accounts perceived as “female” get much more attention, highlighting the gender disparity on the digital front in India. While posts like “Gay marriages mein dahej konse side wale dete hai (Which side gives the dowry in gay marriages)?” may induce chuckles for some, the comments on Tinder groups can be tough to go through.

A Demos study has shown that while male celebrities, female journalists, and male politicians face the highest likelihood of online hostility, women are significantly more likely to be targeted on account of their gender. This app may be pseudonymous, but the sexist comments and gender bias against “perceived” female users put me off.