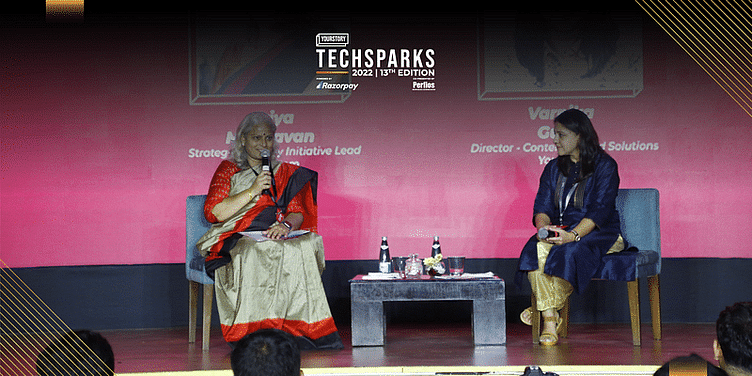 NASSCOM’s Priya Madhavan talks to YourStory on the importance of upskilling and reskilling in order to stay relevant for personal and professional growth.

“It is important to reskill and upskill inorder to experience a personal growth and it can also help you to stay relevant for the industry and the nation,” said Priya Madhavan, Strategic Industry Initiative Lead, NASSCOM, during a fireside chat at the recently held TechSparks 2022.

With India moving towards its big ‘techade’, it's more crucial than ever to build the demand and supply gap for digital tech talent. Many industry reports have called out that the nation is on its path to become a trillion dollar economy and there will be almost 60 million tech jobs in the years to come. Delving deep into the topic, Priya spoke at length about the elements and aspects that are set to solve the skills gap in the IT sector for the country to emerge as the economic and technological powerhouse of the world.

What is India doing to fuel tech and talent?

Talent today is determining the competitive advantage for nations competing in this digital world, and India, with its young and diverse workforce, can be the key for the next frontier of growth and innovation. To this end, NASSCOM & MeitY (The Ministry of Electronics and Information Technology) have put a B2C platform called FutureSkills Prime which is working towards democratising learning by offering students and professionals an opportunity to upskill in digital technologies and professional skills.

“The IT/ITeS sector contributes about 9 percent of the country's GDP. The revenue today is split between traditional and digital skills where traditional skills revenue comes to about 70 percent and digital skills is around 30 percent. But the balance is going to shift in the upcoming three to four years. It’s going to be 40-45 percent traditional and about 60 percent digital. So companies have to start investing in their existing folks and make them technologically advanced,” said Priya.

Talking more about the FutureSkills Prime program, Priya specified that the program is for any Indian citizen who is 16 years of age and above and enable them to earn and upskill in digital skills, earn certifications and even get your money back once the certificate is earned, thereby making digital skilling affordable and accessible to all.

The program has courses that cover a candidate from foundation level with no prerequisites and also include certain deep-skilling, advanced courses for candidates who are looking to upskill themselves. The courses range from AI, big data analytics, cloud computing, blockchain, IoT, 3D printing and modelling, robotics process automation, and more.

“It is an end-to-end skilling platform, that covers you from assessment to certification, with credible content and certifications designed and recognised by the Industry. Since the certification is standards-approved, it has a qualification level which is called NSQF (National Skills Qualification Level) from level 1-10. This level is followed by 100-odd countries. So anybody and everybody can take up a course, get an assessment, earn a certificate; thereby creating skills at scale,” added Priya.

Talent is mostly concentrated in Tier I cities but with growing internet connectivity in the country, people from any city can access the FutureSkills Prime program.

Creating employability is a core focus point of the program and NASSCOM is working with Business process management (BPM) and Electronics Research & Development (ERD) industries to target talent in smaller cities as the enterprises attached to these industries create awareness about the program and the job opportunities it can open up for them. “We have gone to Bhopal, Coimbatore, Vizag, Mysore, Mangalore, and more, along with the enterprises, and created awareness about the skills that people can pick up from our program and a possibility to get a placement in the respective enterprises if they earn the certificate,” said Priya.

Priya reiterated the importance of upskilling and reskilling oneself to stay relevant in the evolving economic-tech landscape. Presenting an insight into her own career, she spoke about starting her career in 1994 as a software developer and working at IBM AS/400 which was then considered a valued skill.

“If I had followed the regular path, I would have gone to the US to work further on the same platform and would have become redundant in a couple of years,” quipped Priya, narrating that she instead stayed in India and forayed in e-commerce in the backdrop of the dot-com era. “I moved into the middleware services and after 10 years to cyber security. I was lucky to always be in technology that was relevant, important and critical, and kept upskilling myself along the way,” said Priya, concluding the chat.