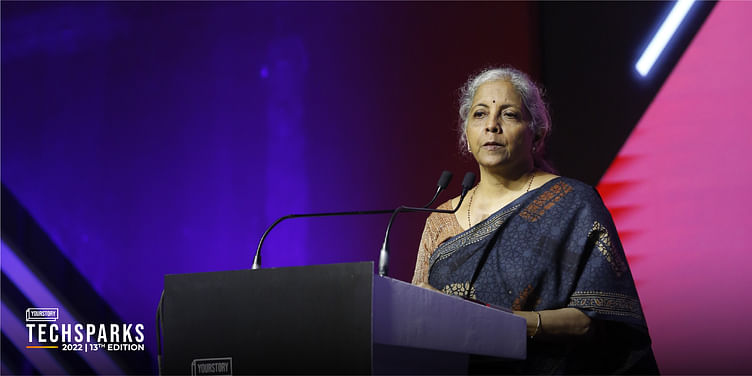 The scale of India's digital revolution, such as with India Stack, has not been achieved elsewhere, and the country needs to capitalise on that, Union Finance Minister Nirmala Sitharaman said at TechSparks 2022.

For a developing nation that often looked to the West for inspiration, India is now establishing global benchmarks with its tech prowess, forcing other countries to take notice, Union Finance Minister Nirmala Sitharaman said at YourStory's flagship startup-tech event, TechSparks.

“Global benchmarks have been... achieved in India during the pandemic,” Sitharaman said, delivering the keynote address to a packed gathering of startup entrepreneurs and investors. “The scale of digital revolution—the India Stack—has not been achieved elsewhere. That is what we need to leverage and capitalise on.”

This should instill confidence in India to find more solutions on its own and leverage those, she said.

Emphasising on the role of tech-driven innovations and homegrown solutions in shaping India's "tech-ade", the Union Minister stressed on two key factors to ensure easy adoption: affordability, or frugality in innovation, and scalability.

The “digital skeletal network which is available in India is not available elsewhere," Sitharaman said.

On the government's contribution to growing and ramping up digital innovation in India, Sitharaman said that the India Stack digital infrastructure, the Open Network for Digital Commerce, or ONDC, and the Open Credit Enablement Network, or OCEN, have been built as a public good so entrepreneurs can build futuristic solutions on top of those.

"Digital fundamental infrastructure in India is created with the government and is created to be a public good rather than to be costed," the Finance Minister said. "(The) rapidity with which each one of you is looking to exploit that common public good is making us nimble in the digital world."

Later in a conversation with YourStory Founder and CEO Shradha Sharma, Sitharaman highlighted that Prime Minister Narendra Modi was constantly engaging with startups, adding that there was much emphasis on regulators staying ahead of the curve.

"It should not be that solutions are coming from startups and regulators are spending time understanding them. This must happen simultaneously, and rapidly," she said.

Highlighting another aspect of how the government's encouraging startups and innovation, the Finance Minister said the administration had simplified the process of filing patents and lowered the costs.

“In the last 5-6 years, a 46% increase in patents sanction (has been seen)," she said. "Women patent applicants are being supported and the cost for startups to register patents have been brought down drastically."

The Finance Minister added that startups needed to also look at traditional industries such as manufacturing and logistics to solve problems that affect core businesses.

“Not just solutions where aggregations will bring in cost-effective answers, but also in the way we run our businesses," she said, adding that such core areas have immediate takers to scale up innovation.

Finally, the Finance Minister put the onus on the young demographic of India to come up with innovative solutions to power India into a developed economy.

“I envy you," she said. "What a generation. You are setting the terminology, you are setting (the agenda for) what has to be done for the next 25 years."