Jamshed J Irani: The Steel Man of India passes away at 86 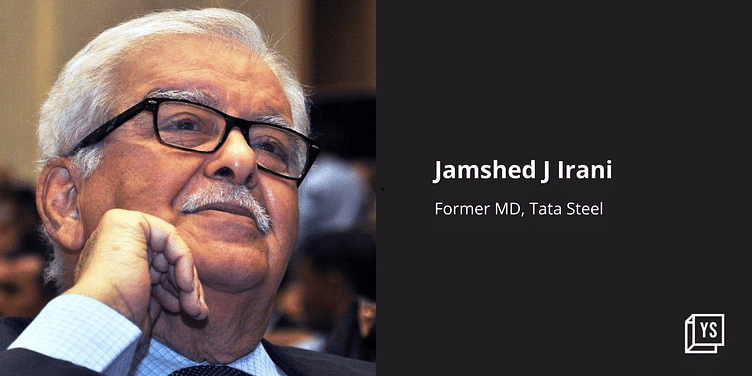 Jamshed J Irani, who led Tata Steel during the country's economic liberalisation and was known as the steel man of India, died in Jamshedpur late Monday night.

Jamshed J Irani, who led Tata Steel during the country's economic liberalisation, died in Jamshedpur late Monday night. He was 86.

Known as the Steel man of India, Irani is widely credited with steering TISCO through difficult times after liberalisation opened up the market and the steel industry cycle saw profits of most steel makers falling.

"The Steel Man of India passes away. It is with profound grief that Tata Steel informs of the demise of Padma Bhushan Dr Jamshed J Irani," Tata Steel said in a statement.

Irani retired from the board of Tata Steel in June 2011, leaving behind a legacy of 43 years, which won him and the company international acclaim in various fields.

He is survived by his wife Daisy Irani and his three children, Zubin, Niloufer, and Tanaaz.

People in Jamshedpur, known as the steel city, mourned the passing away of Jamshed J Irani and they described him as a "hard taskmaster with a heart of gold".

"He will be fondly remembered as a visionary leader who led Tata Steel from the forefront during India's economic liberalisation in the early 1990s and immensely contributed to the growth and development of the steel industry in India," Tata Steel said.

"He was a towering corporate personality whose contribution to the steel industry was immense. Dr Irani will be deeply missed by all of us at Tata Group and we pray for his departed soul," he said.

Born on June 2, 1936, in Nagpur to Jiji Irani and Khorshed Irani, Irani completed his BSc from Science College, Nagpur in 1956 and MSc in Geology from the Nagpur University in 1958.

He started his professional career with the British Iron and Steel Research Association in Sheffield in 1963. He returned to India to join TISCO as it was then known, in 1968, and joined the firm as Assistant to the Director in-charge of Research and Development.

He joined the Board of Tata Steel in 1981 and was also a Non-Executive Director from 2001 for a decade. Besides Tata Steel and Tata Sons, Irani also served as a Director of several Tata Group companies, including Tata Motors and Tata Teleservices.

He also held the post of National President of the Confederation of Indian Industry (CII) for 1992-93.

Irani was conferred several honours, including his appointment as International Fellow of the Royal Academy of Engineering in 1996 and an Honorary Knighthood by Queen Elizabeth II in 1997 for his contributions to Indo-British Trade and Co-operation.

He was conferred the Padma Bhushan in 2007 for his contribution to the industry.

Irani was also the recipient of the Lifetime Achievement Award by the Government of India in 2008 as acknowledgement to his services in the area of metallurgy.

"Dr Irani laid the foundation of modern Tata Steel. He was MD of Tata Steel during its most difficult time from 1992 to 2001. He led Tata Steel's transformation from a company with high cost, low employee morale, poor technology and poor operating practices to a leading steel player,“ former Tata Steel Vice Chairman B Muthuraman said.

Irani had a tough exterior but was very soft inside, said Muthuraman, who began his journey at Tata Steel in 1966 as a trainee engineer and rose to the position of managing director.

Tata Steel CEO and MD T V Narendran said Irani transformed the company in the nineties and made it one of the lowest cost steel producers in the world.

"He helped build a strong foundation on which we grew in the subsequent decades. He led with courage and conviction and was a role model and mentor for many in Tata Steel then and now. The employees of Tata Steel past and present are indebted to his leadership during turbulent times," he said.