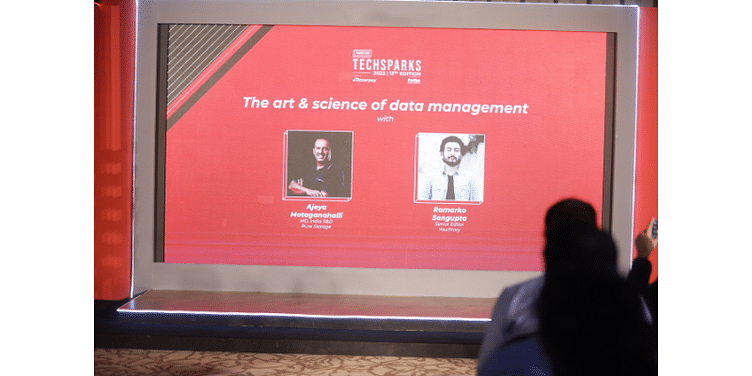 YourStory caught up with Ajeya Motaganahalli, Managing Director, India R&D, Pure Storage at TechSparks 2022 to chat about the future of data storage. The IT pioneer delivers some of the world's most advanced data storage technology and services.

Data is the new oil, digital currency, so on and so forth. Everyone has heard this multiple times over. And yes, it is exploding and doubling every few years. But what really is the future of data storage and what are the disruptors and constants in this ecosystem? YourStory caught up with Ajeya Motaganahalli, Managing Director, India R&D, Pure Storage at TechSparks 2022 to get all the answers. Simply put, Pure Storage simplifies data storage. It offers a cloud-like experience that empowers organisations to get the most from their data while reducing the complexity and expense of managing the infrastructure behind it.

“We at Pure Storage are on a mission to wipe out disks from the face of this planet,” says Ajeya, who believes that Flash storage is really the future of data storage. Let’s take a moment here to understand Flash. IT behemoth IBM defines Flash storage as a solid-state technology that uses flash memory chips for writing and storing data. Solutions range from USB drives to enterprise-level arrays. Flash storage can achieve very fast response times (microsecond latency), compared to hard drives with moving components. It uses non-volatile memory, which means that data is not lost when the power is turned off. It is highly available and uses less energy and physical space than mechanical disk storage, states IBM.

The future of data storage is Flash

Stressing on how data has indeed become the backbone of everything, Ajeya explains –

“The rate at which data is growing (is phenomenal) and what are people doing with data? They are using it for advanced applications, for driving analytics, they are using it for actually authenticating yourselves, using it to actually look back at your records. They are using it for so many things, right? And they are basing it on complex computations that’s going to save the planet from imploding. Important tech like the aeroplanes that are flying around, space shuttles, or your car…they are talking constantly. So everything is based on data.” And, storage is the technology that’s the infrastructure underneath that powers all of it, he adds. If one looks at the majority of the world’s storage today, it is based on spinning disks. These are magnetic disks that are spinning and if one needs more speed which basically means more performance one needs faster spinning disks, but there are limitations to that. “The faster it spins, if you look at the edges of it you are actually approaching supersonic speeds and once it becomes supersonic it becomes hard to maintain consistency of data there…and they are bound to fail,” says Ajeya for whom there is no doubt that the future of data storage is Flash.

But when will Flash actually wipe out disks, which Pure Storage believes is inevitable? Ajeya says even analysts in the sector do not have any doubt about the inevitability of it, the jury is still out on whether it’ll happen in a couple of decades or in 40 years. The timeline also depends on factors such as viability and need for performance.

“Let’s say you don’t need performance, you say you are happy with the performance your spinning disks are giving then there are other factors like the total cost of ownership of that system. It’s not just what you pay for a gigabyte of storage whether it’s disk or Flash, it’s also about how much of storage you are utilising in your data centre. Are you having a refrigerator like form factor or would you rather have a microwave kind of a form factor with Flash?” says Ajeya.

“Are you spending like 10 times less with power with flash? Then yes, that reduces your total cost of ownership. How much of sheet metal are you using to store these? The cost of that is not coming down, it’s going up. How green are your data centres? So if you calculate the total cost of ownership of a system at scale like if you want a system that stores 10 terabytes of data…Flash and disk costs in the next couple of years are going to be highly comparable. Those curves are going to cross irrespective of performance,” he says.

Ajeya believes the said curves will cross as early as a couple of years, going by the rate at which Flash is falling in its price compared to disk. A fall that’s only going to accelerate, he stresses.

So, if Flash is going to be the biggest disruptor of the decade in data storage, what is likely to be the ‘constant’? Ajeya believes it will be good-old tapes. Tapes, he says, are unlikely to go anywhere because one still needs a static medium that does not need power to sustain it in cold storage. “So I would say it will be Flash which will be the predominant medium for primary storage, backup storage, fast storage and for any other application on one hand and then for archives it’s going to be like tapes. So I think these are going to be the two trends,” he says.

Environmental footprints are something that industries and countries at large are slowly waking up to. The ills of leaving carbon footprints has been talked about ad-nauseum, and as it should be. For the uninitiated, what’s a carbon footprint? According to the WHO, a carbon footprint is a measure of the impact your activities have on the amount of carbon dioxide (CO2) produced through the burning of fossil fuels and is expressed as a weight of CO2 emissions produced in tonnes. While talk is big, there is still a lot left to be done. And, Pure Storage, on its part is conscious about taking active measures towards helping ‘save the planet’.

But, how exactly is Pure Storage managing this?

“Because we are making ourselves more and more dense. The same area of Flash is getting more and more denser so we can have 2x, 4x, 16x kind of capacity in the same form factor because the power remains constant because it is Flash. The power per gigabyte drastically falls which helps in saving carbon emissions,” he concludes.