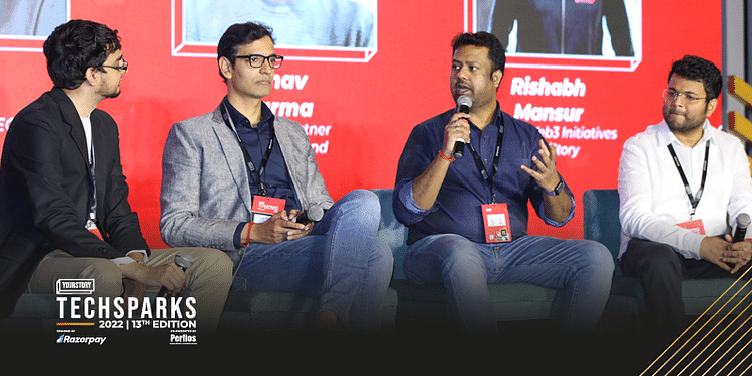 The world over, web3 seems to be the flavour of the season.

The idea of a new iteration of the world wide web that incorporates concepts such as decentralisation, blockchain technologies, and token-based economics and enables increased data security, scalability, and privacy while dealing with big tech seems to have caught on.

And Industry leaders came together at the TechSparks platform to share their perspectives on web3, decentralisation, and current market crises.

The 13th edition of India's most influential startup-tech conference focuses on the theme “Building On India’s Tech Agenda”, and has brought together architects and early adopters across India’s innovation ecosystem.

In the first of many discussions, Shailesh Lakhani, Managing Director at Sequoia Capital India, said, “In web3, users have much more say; it’s a way to distribute value.”

Shailesh Lakhani said since the technology is still in its infancy, the sector will, in the future, experiment with varied business models and new approaches and cited the example of NFTs and their growth.

“We have seen interesting sports NFT platforms like ﻿FanCraze﻿. These NFTs are not just JPEG images; they have a lot of use cases, like ticketing, creator economy, crowd funding. Many interesting applications will come up in India,” he said.

Shailesh agreed that centralised exchanges are easy to use but said they are not transparent, hinting that decentralised exchanges could be a better option. However, he did acknowledge that while DeFi will evolve it does have some complexities that are limiting mass adoption.

“Decentralised finance [cuts out intermediaries] but is not easy for consumers to use,” he said, adding that he expects many new approaches in the web3 gaming sector. “A lot of different models will come up.”

Decentralisation: when to and when not to?

In another panel discussion, Priyeshu Garg, Co-founder of ﻿Router Protocol﻿; Ashish Singhal, Co-founder and CEO of ﻿CoinSwitch﻿; and Pranav Sharma, Founding Partner of Woodstock Fund; discussed the future of decentralisation.

For Priyeshu, decentralisation is a tool kit. “Instead of giving power to stakeholders, users will have more power," he said.

However, despite the many advantages, all three panellists agreed that mass adoption of web3 would take another few years.

Looking at the recent market conditions and centralised exchanges losing millions of dollars due to simple mistakes, the panellists suggested implementation of proof of reserves. A Proof of Reserve (PoR) involves comparing on-chain assets held in reserve to off-chain liabilities. In other words, it helps users to audit digital asset reserves held by a custodian on demand.

“Users need to start demanding proof of reserves because centralised exchanges have their own challenges,” Priyeshu said.

Can web2 bring the next billion users to web3?

In the final panel discussion, Neeraj Khandelwal, Co-founder of ﻿CoinDCX﻿, and Harsh Rajat, Founder of PUSH Protocol, discussed how web2 can play a role in bringing the next billion users to web3.

Neeraj believes that web2.5 could be the layer that could bridge web2 and web3.

“For any company to be successful, it has to have a lot of customers. For customers to move from web2 to web3, they need to have a better experience. That is where web2.5 comes into play as it combines the power of web2 with the simplicity of web3,” Neeraj said.

Harsh agreed that web2.5 would bring in users and simplify the complex technology.

"Users value time and innovation, but won’t understand if the innovation becomes tricky. Currently web3 is tricky. That is why web2.5 is needed – to make it easier for users.”

Neeraj is rooting for India to be the leader in this sector. "For this, we need a great startup environment, good amount of investment, and policy and framework built for web3,” he said.