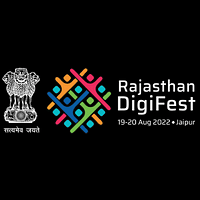 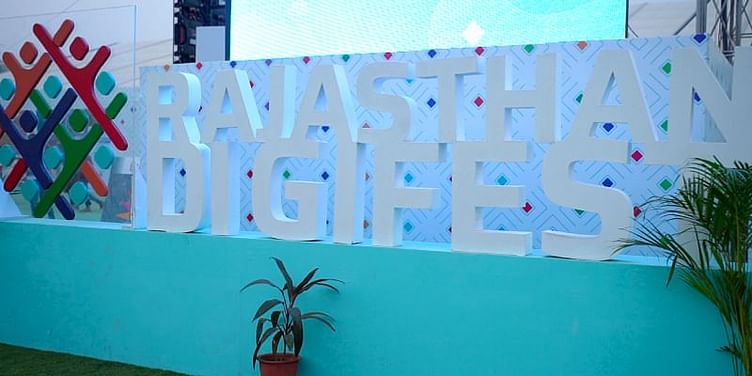 Rajasthan’s Department of Information Technology and Communication organised the second edition of the Rajasthan DigiFest in Jodhpur, on November 11, 12, and 13, 2022. Here’s what went down at the event.

“If we are determined, then it doesn’t matter if we’re from a small town. We should try whenever we get a chance, only then we will be successful,” said Richa Sharma - Founder and CEO, ﻿The Book Cafe﻿ at the second edition of the Rajasthan DigiFest 2022 in Jodhpur.

Held on November 11, 12, and 13, the DigiFest mirrored Richa’s words as thousands of entrepreneurs, students, business leaders, policymakers, and more gathered at the Government Polytechnic College in Jodhpur to celebrate Rajasthan’s entrepreneurial spirit. Organised by Rajasthan’s Department of Information Technology and Communication (DoITC), the summit saw more than 32,000 attendees across three days.

Major highlights from the event included the launch of the new Rajasthan Startup Policy 2022 by Chief Minister Ashok Gehlot, to promote Rajasthan as a hub for innovation and boost startup growth across industry verticals; increase job opportunities for and upskill youth; and encourage diversity and sustainability within the startup ecosystem. Two iStart Rajasthan incubation centres in Pali and Jodhpur were also inaugurated by the chief minister as part of the summit, while work commenced on the Rs 600 crore Rajiv Gandhi Fintech Digital Institute in Jodhpur.

Speaking to YourStory, Ashish Gupta (IAS) - Commissioner and Joint Secretary at DoITC said, “Usually these festivals take place in bigger cities, but the government is now attempting to take them to Tier 2 and 3 cities like Jodhpur. IT isn’t defined by any particular geography, and it’s for everyone - whether it’s for a farmer, a startup, a student. Innovation is also not restricted to any region. So we are encouraging the youth to come forward with their ideas.”

From panel discussions to masterclasses, fireside chats, and workshops, a number of knowledge sessions were hosted to help young and budding entrepreneurs learn the ins and outs of the startup and IT ecosystem. The sessions kicked off with an inspiring fireside chat on ‘Strengthening Jodhpur's Startup Ecosystem’ with Sushil Sharma - Founder, Marwari Catalysts; Dharamveer Chauhan - Co-founder and CEO, ﻿Zostel﻿; Neerav Jain - Founder, ﻿Cityfurnish﻿; and Surender Singh Rajpurohit - Founder, Turms.

Another important session at the summit was the fireside chat on ‘SHEROES: Changing Business Dynamics’ with Nidhi Banthia Mehta - TEDxSpeaker and Founder & CEO of ﻿Self Achievers﻿, Surashri Rahane - Founder and CEO, ﻿Yearbook Canvas﻿, and Richa. Telling YourStory about the great experience she had at the DigiFest, Nidhi said, “We’re seeing so many students here, it’s inspiring to see children and the next generation being curious to learn about the opportunities for employment and entrepreneurship. We’re able to see the entrepreneurial spirit in practice here. It’s 100% youth oriented - the target of inspiring the youth and showing them the opportunities in IT enablement, has definitely seen success.”

One of the major highlights of the Jodhpur DigiFest was the IT Job Fair, with more than 250 companies participating and thousands of jobs up for grabs. Over 23,000 job aspirants attended the fair, with more than 3,500 being selected on the spot and more than 9,200 were shortlisted for various roles.

The DigiFest also featured an expo area and a marketplace for startups to sell their products and network with potential investors, clients, and government officials, and featured over 130 iStart Rajasthan recognised startups, as well as portfolio startups from Marwari Catalyst and other academic institutions.

Dr. Akshay Jain - Co-founder and CEO and Mahi Singh - Co-founder, COO of energy storage startup Cancrie said that the DigiFest was the perfect platform for them and other startups as well to scale their business. Akshay said, “There are a lot of startups which are making EVs and using batteries, so we’ve had a lot of interest from them to use our materials to make the performance of their batteries better. We’re also meeting government officials who’re providing us opportunities to connect with government and industries,” while Mahi added, “We’re very close to commercialisation and it’s good for us to get exposure at this point. This is a platform where we’ve gotten that. We’ve interacted with a lot of people and these are good starting steps we’ve managed to take, thanks to the DigiFest.”

Taking the DigiFest to Jodhpur was also a brilliant idea, according to Sudhanshu Goyal - Founder and CEO, Health Gennie. “The DigiFest has been phenomenal. It’s a great platform that gives startups the opportunity to network and pitch their ideas to investors. There’s also a huge number of visitors that we can showcase our product to. This should happen every year in other cities too so that even the smallest startups get the same opportunities,” he said.