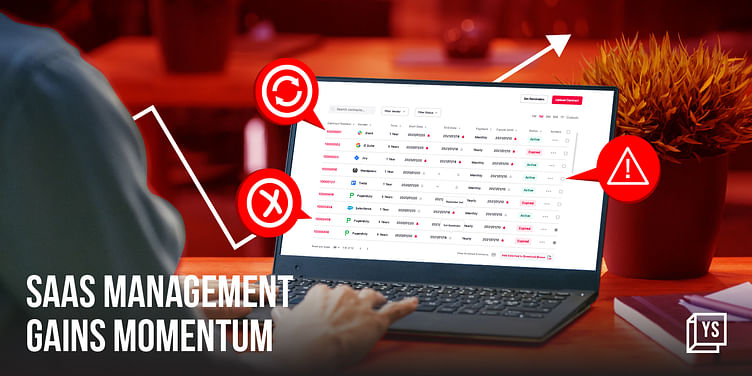 Companies looking to conserve cash to tide over a looming recession are gravitating towards SaaS management startups to shed software excesses and pare costs.

At the start of 2022, Indus Khaitan, Founder and CEO of Quolum, wasn’t sure his startup would survive the year. The company, which helps organisations manage their software requirements and costs, had only two paying customers in March, out of a total 12.

Quolum’s ending the year, though, with about 50 customers, both in the US and India, with most of them paying for its product and services.

What changed in the last few months, leading to this reversal in fortunes for Quolum?

The software-as-a-service sector that benefited from the rush to digitalise during the pandemic is in a trough as companies look to conserve cash to tide over a looming recession. These companies are now increasingly gravitating towards SaaS management startups such as Quolum to shed their software excesses.

Quolum, based in Dublin but with a distributed workforce including in India, has helped clients cut costs by identifying redundant or overlapping tools and suggesting ways to optimise those.

For instance, different teams in an company might be using Google Meet, Zoom, and Slack for video conferencing. Effectively, the company ends up paying for three tools that offer the same facilities.

﻿Quolum﻿, according to Indus, has helped clients reduce costs by as much as 20% in the use of software, cloud, and digital solutions, depending on company size, its software stack, and usage.

﻿Spendflo﻿, a SaaS buying and spend management startup, helps clients save, on average, about 23% in software spending over a period of one year. The San Francisco- and Chennai-based company helps clients manage their public cloud spend by unifying their buying, vendor security, and management.

﻿Zluri﻿, based in San Francisco and Bengaluru, helps customers get an overview of and optimise their SaaS spend. The startup says it helps save up to 35% of customers’ SaaS spend over a year. Zluri has acquired nearly half of its customers in just the last four months.

In the last decade or so, the market has been flooded with different kinds of SaaS solutions. They are affordable, easy to use, and can easily integrate with complementing apps, making them attractive to organisations, especially those in the growth and late stages.

The pandemic accelerated software adoption in several companies as they scrambled to go remote overnight. Cloud solutions were touted as the next big thing to build efficiency into the organisation.

On top of all this, there was a flush of capital from venture capital firms, which meant money was not an issue as companies shopped for the latest SaaS offerings. As their bank accounts became fat, so did their IT stack. Indus of Quolum compares the situation to that of an overloaded refrigerator.

“There is a proliferation of tools and ungoverned technology stacks within organisations,” says Ritish Reddy, Co-founder of Zluri. “From one tool for one use case, it has now become a stack of tools for a particular use case.”

In the last few months, however, things have changed dramatically with companies realising the need for cost optimisation by removing redundancies and overlapping products.

“Until a few months ago, companies were growing faster and spending lots of money on software and tools. There were no centralised procurements, (and) shadow IT was prevalent, which led to inefficiencies,” says Rajiv Ramanan, Co-founder and Chief Revenue Officer at SpendFlo. “But cost optimisation is the number one concern for most CFOs today.”

Indus says a lot of companies that said ‘no’ to him earlier are now either Quolum’s customers or evaluating its offerings.

In 2021, the CFO of a large marketing technology firm told Indus that his company’s board wanted him to increase revenue at all costs and that Quolum’s offerings were not a priority.

But when Indus reached out to the CFO in July this year, he immediately jumped into a call with him. In about a month, the company was a paying customer of Quolum.

With CFOs not having enough experience in managing software expenses, they are turning to SaaS management companies for their expertise.

Rajiv of SpendFlo says companies no longer want efficiency in operations alone and are seeking “hard savings” in terms of dollars.

“When CFOs are thinking about efficiency over growth, they want to save costs on all fronts and these companies are helping with that mandate," says an investor, who asked to remain anonymous. "(SaaS management) products help with visibility on which SaaS tools you are spending on, and which are being under-utilised so you can reduce licences, and also help renegotiate contracts.”

Helping clients save time and money

All three startups featured in this article offer an overview of a company’s SaaS spend, usage, and renewals. They also help with procurement and negotiation of SaaS products for their customers (Zluri does the latter only if customers ask for it). Also, the three startups seem to be largely targeting mid-market companies and, to some extent, lower enterprise organisations.

The objective of the three startups is to optimise SaaS spend and help companies with buying/negotiations, but their approach to solving problems is different.

“Quolum is focused more on payments card and usage visibility, SpendFlo more on procurement and negotiations, while Zluri focuses on usage visibility and licence management," said the unnamed investor. "That said, all (three) do everything but just that their strengths vary.”

“The nature of software is that if you cancel it, you do not pay for the next month, and that cash gets added to the bottom line. So many companies are doing this,” he explains.

SpendFlo and Zluri help manage workflow approvals across different functions in an organisation. The latter also helps in quick onboarding and offboarding of employees.

Ritish says, on an average, it takes about 30 hours each to onboard and offboard an employee (giving and revoking access to the company’s tech stack). He says Zluri can reduce that time to five minutes each. Needless to say, time saved is money saved.

SpendFlo does sentiment analysis and surveys of the tools’ end-users. These findings are aligned with business objectives–to help clients decide whether to renew a software or downgrade/upgrade it. The startup is also helping companies do early renewals in cases where pricing events are anticipated.

“The first thing that a lot of companies are doing is identifying core software that is needed to run their businesses. And, even in that core, they are coming up with headcount and rationalisation plans,” says Rajiv.

According to Ritish, SaaS management startups are becoming “critical” systems of record for companies, without which it is difficult for them to take any action or decision on their technology stacks.

Indus says, “We’re building a sort of an anti-fragile solution in a counter-cyclical product category.”

Towards a ‘happy’ new year

Ritish is upbeat about the opportunity that the slowdown has brought for companies like theirs. Zluri, which was founded in late 2020, has grown 6-7x since it raised $10 million in a Series A round led by MassMutual Ventures in January.

Given the rise in demand from companies for SaaS management tools, the startup has increased its revenue projections by 30% for the financial year ending March 2023.

SpendFlo too has seen good growth in the last few months when companies realised the need to get rid of excess fat. The startup’s customer acquisition has grown 6x since March; there is also a 6x growth in both organic and inorganic leads generated in the last six months, while just the organic leads, an indicator of inbound interest in the solution, generated by the startup have gone up by 10x in the same period.

Quolum expects its revenues to grow 3-4x next year, compared to 2021. It hopes to cross the ARR (annual recurring revenue) threshold of $5 million soon. The startup, which raised a seed funding of $2.8 million in two rounds during late 2019 and early 2020, plans to raise its Series A round in the first quarter of next year.

Indus has let go of his pessimism from earlier this year and is looking forward to ringing in the new year with renewed vigour. He believes the tech winter will outlast the funding winter, making cash conservation and hygiene practices priorities for organisations. And this could turn the spotlight on SaaS management companies in the coming years.