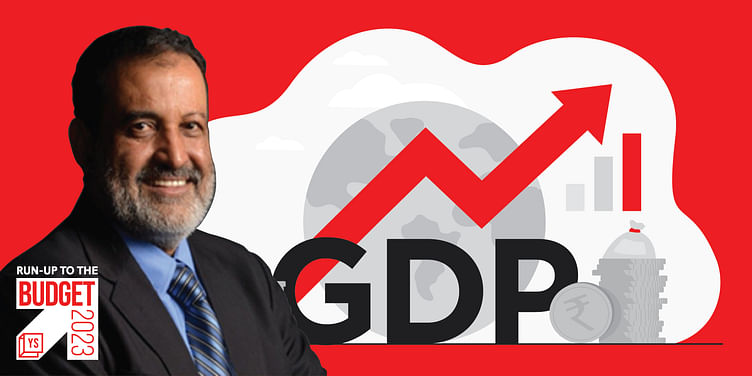 The Indian economy is in good shape, with signs of a capex-led consumption boom. Now the challenge for the government is to come up with a budget that will accelerate growth, spur the spirit of Indian entrepreneurs, and make India more productive.

The economy is in good shape with buoyant tax collections and signs of capital expenditure rising. These have to be leveraged to spur growth and consumption in the Indian economy.

Taxes have been buoyant, and this shows strong consumption and growth. This buoyancy is due to income tax and corporate tax. Despite the corporate tax rate being brought down to 25%, corporate taxes have shown a huge collection.

We see signs of the corporate capital expenditure programme accelerating, and the reasons are very clear.

Debt in the corporate balance sheet has come down in the last two to three years. There is strict cost control because of the learnings from the COVID-10 pandemic. Overall, the industry has become very efficient, leading to a larger capital at play. The banking sector has been totally cleaned up, and bank lending is going up in double digits.

These are signs of heavy growth, and we can certainly see the start of a capital expenditure-led consumption boom in the next two or three years.

The challenge for the government is to come up with a budget that will accelerate growth and consumption and spur the animal spirit of Indian entrepreneurs. The budget should focus on increasing consumption and making India more productive.

The huge spending on infrastructure by the government (Rs 7.5 lakh crore being spent in FY23) is certainly creating a much bigger logistic network across roads, railways, and ports. Logistics costs are coming down, and this is giving a boost to exports from the country.

Engineering exports have reached $100 billion. Software exports this fiscal year will be around $200 billion and net software inflow will be about $125 billion. We’ll have $100 billion of remittances and about $100 billion of FDI. These are truly extraordinary achievements on which the budget should play.

The budget should look at tackling income tax in a very big way.

The middle class has taken the brunt of increased taxation on fuel on their income. Despite higher inflation over the last few years, they have not got any significant tax relief. The suggestion would be to expand the tax slabs.

The increased surcharge of 15% and 25% should be done away with because the high tax rate of 43% on incomes above Rs 5 crore on the entire base has driven away more than 10,000 high net worth individuals (HNIs) outside of India. The flight of HNIs has become very worrying because if 10,000 HNIs relocate to tax-friendly jurisdiction, about Rs 40,000 crore to Rs 50,000 crore of consumption will move away. And we cannot afford to have an entrepreneurial class leave this country.

If the government is worried about the shift of HNIs, then they should make tax compliance very simple. A simplified tax structure will increase compliance.

The corporate tax rate of 25% and 15% is a very good tax rate and there should be no fiddling with this. This has borne rich dividends for India, and there has been a big increase in tax compliance. However, the big challenge regarding income taxes has been the increased amounts being stuck in disputes in the current year.

The new IT system has worked very well with Rs 2.5 lakh crore of refunds, given within 15-30 days of filing the returns. All taxpayers are extremely happy, including the corporate sector, seeing this great efficiency. The finance ministry and the IT department have to be congratulated for the great use of technology.

What is required is looking at all the tax disputes and reducing tax terrorism. The money stuck in tax disputes has gone up from Rs 4.5 lakh crore in 2014 to Rs 12.5 lakh crore last year. This is a major cause for worry.

Tax disputes have gone up because of the high tax assessment by the officials, and this is turned down by the superior court. This cannot continue. The government should come out with a scheme whereby all old tax disputes should be adjudicated by a judicial authority quickly and settled across the board.

Government must also look at ESOP taxation, which has been a key ask from the startup community for a long time. It’s very unfortunate that people are asked to pay ESOPs tax at the time of exercise and it is a big disadvantage as their liquidity event is unknown, unlike the publicly listed companies.

Taxation on ESOPs for unlisted companies should be postponed to the point of sale. This can be done very simply by ensuring that all ESOP shares issued are dematerialised and kept in the depository till the point of sale and tax is levied only when there is a sale.

It is important for the government to understand how it can encourage more individuals to become entrepreneurs, which will result in sharing of wealth.

In the case of startups redomiciling outside India for various reasons, primarily on the taxation front, the government should evolve a short-term scheme that can bring them back.

What India requires is a massive flow of capital from outside. But the overseas investors who put their money in Indian startups face several challenges while filling up a lot of documentation. This could be made much simpler. Overseas investors can be treated on par with Indian taxpayers without being subject to unnecessary documentation.

Regarding GST, the system has settled down and is working very well. It is suggested that the electronic bills system will be applied for all enterprises having a revenue of more than Rs 5 crore, so that all of them will ultimately learn to pay GST.

GST has many classification issues where the inputs are taxed higher than output. This needs to be corrected on an urgent basis.

India is certainly seeing an improvement in the economic status due to the many reforms undertaken by the Modi government. Budget 2023-24 should be a budget wherein bold moves are made, old issues are cleaned, disputes are settled, and Indians are empowered fully to take the country forward to realise the GDP target of $10 trillion by 2032.