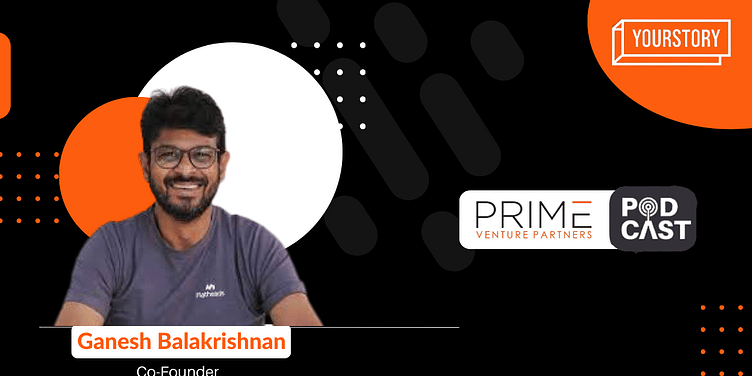 In this episode of the Prime Ventures Partners Podcast, Flatheads Co-founder Ganesh Balakrishnan walks us through his journey of building the startup, the mistakes he made along the way, and the resurrection of his brand post-Shark Tank.

What made the episode special was the honest portrayal of an entrepreneur’s struggles and vulnerabilities. It’s no surprise that the episode struck a chord with countless viewers, resulting in an outpouring of empathy and support for Ganesh and Flatheads.

“It is great to hear that sometimes you just need to pause, reflect, and then think about the best course of action, not just keep pushing mindlessly, right? So a lot of those things came through, which were very interesting,” remarks Ganesh.

Taking the first step with momoe

Raised in Nashik, Ganesh graduated as a mechanical engineer from IIT Bombay at the height of the Y2K boom. But unlike most graduates, he resisted the urge to join the dot com race and committed himself to core engineering. After working with Ingersoll-Rand for a few years, he decided to venture into general management.

With a PGDM from IIM Bangalore, Ganesh worked as a strategy consultant at premier firms, including Bain & Company and Honeywell.

Despite a stellar career trajectory, Ganesh’s drive to start his own venture led him to launch Momoe, a mobile payment app, in 2013. The idea was to build a sophisticated, hardware-independent payment solution that would appeal to tech-savvy individuals.

But those were the pre-UPI days, and 3G had just launched in India. That meant Momoe was slightly ahead of its time. But that didn’t stop Ganesh from growing his startup through strategic partnerships with WiFi providers and telecom operators. But it wasn’t until he integrated the app at toll booths on Bangalore’s NICE Road that Momoe finally established product-market fit.

“We had done no marketing because, on the NICE road, you’re not allowed to have billboards because of the speed. So we had done zero marketing, it just went organic, right? Out there. So that gave us a feel of how customer adoption works without doing anything, your CAC is almost zero and suddenly you start getting virality,” recalls Ganesh.

“So that was a win-win for both ShopClues and for us. We could acquire their entire merchant base and enable payments there. At the same time, they could get their catalog and make them digital. So that was the thought process there,” adds Ganesh.

The ebb and flow of Flatheads

In 2018, after a smooth exit from Shopclues, Ganesh partnered with Utkarsh Biradar to launch Flatheads, a brand of comfy and breathable yet stylish sneakers. The idea was to build a “casual Hush Puppies equivalent” for modern office-goers.

But for a brand called Flatheads, the company’s journey has been replete with ups and downs. From hitting the right price point to establishing product-market fit, Ganesh and his co-founder faced several challenges.

And then the pandemic hit, which forced companies to embrace remote work. That rendered the idea of buying great shoes for work nearly obsolete. Despite reaching out to angel investors and deploying various promotional strategies, Flatheads only had a few months of runway.

“April ’22 is when whatever term sheets and discussions we were having completely went cold. And that is when we realised we were in trouble, right? We invested all this, but the money never came, right? So that’s when we hit the wall if you will,” adds Ganesh.

While the future looked bleak for Flatheads, Ganesh decided to give it one last try with Shark Tank India. The idea was to get new investors on board while building more awareness for the brand, giving it a new lease on life.

The episode didn’t air until January 2023, which meant Flatheads didn’t get quite the tailwind Ganesh was expecting. But the good thing is that as soon as the episode was broadcasted, people from across India overwhelmed Ganesh with their support. The renewed interest in Flatheads has also rekindled his hope of keeping the brand alive.

“And at the end, hugs all around and people getting emotional and stuff like that. I mean, that felt more like I’m meeting another startup guy and we are talking, we are exchanging our own life stories, and having a drink together. That was really cool to see,” adds Ganesh as he reminisces about his pitch on Shark Tank India.