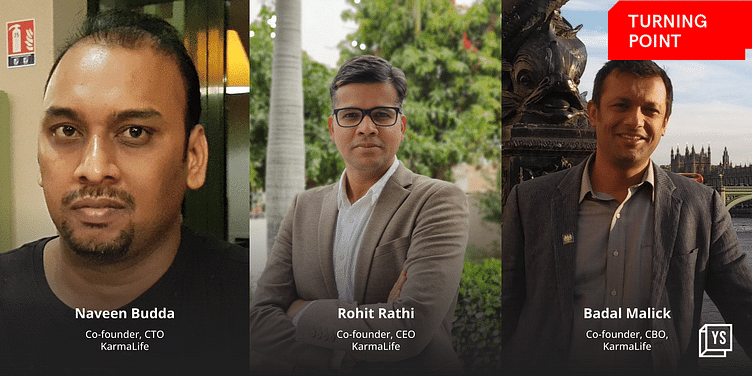 The Turning Point is a series of short articles that focus on the moment entrepreneurs hit upon their winning idea. This week, we feature Bengaluru-based fintech app KarmaLife.

A report released by NITI Aayog last year puts India’s gig workforce at 7.7 million for 2020-21, and expects the number to cross 23.5 million by 2029-30. Job listings platform Indeed states that the gig workforce in India is likely to add 9-11 million workers at least by 2025.

The seeds for Karmalife were sown in Rohit’s mind in 2017, when a landlord lowered the advance payment to rent a house after identifying him (Rohit) as a successful entrepreneur who had received investments from Sachin Tendulkar for his previous venture.

Rohit wanted to make this trust and belief, which led to the landlord lowering his ask, the core of his next venture to tap the financial segment. He then got on board Naveen, his colleague from Smarton, and Badal, whom he met through a common friend.

When analysing the segment after his exit from Smarton in 2018, Rohit realised that the growing gig economy offered plenty of opportunities to build a fintech platform that could drive financial inclusion.

“The gig workforce became the natural choice for these reasons," Rohit says. “One, they are slightly evolved in terms of technology. Two, data infrastructure exists on tap, and three, the contribution of these workers is increasing in the economy.”

COVID-19 only accelerated their contribution to the economy and helped grow KarmaLife’s business.

With 85 SKUs, this D2C brand is a one-stop destination for men’s grooming products

The founders started working on KarmaLife in 2019, but the company was registered only in 2020. That year was spent researching the market, to find what would work and what would not.

The founder says a bias exists when building a product for gig workers, regarding credit worthiness of the users.

Unlike a traditional bank that looks at a set of fixed parameters to offer services such as loans, KarmaLife’s model is predicated on dynamicity.

It follows its users' journeys, their payment behaviours, and several other behavioural parameters, and offers financial services based on those readings.

Basically, it borrows from the Indian cultural philosophy of Karma, which is the law by which good or bad actions determine an individual’s future.

The team then piloted their product with a well-known company; of the 2,000 gig workers, 700 used the product.

The pilot showed that people who availed credit and could not pay would actively reach out to ask for extensions and ensured that they paid the money back.

“Some of the unbiased decisions we took worked in our favour,” shares Rohit. “This entire experience and the feedback we received before we launched our product for the larger audience  helped us.”

He adds that the team did not tweak the product after the pilot, but only added more features.

“When we saw it all coming together- gaining the trust of the user, building a product/underwriting/experience, getting NBFCs/financial players together—we understood that we were on the right track and could make it work and have a meaningful impact,” he says.

Fintech funding in 2022 fell by 47%, compared with the previous year: Tracxn report

The team shares that business, in terms of disbursement and revenue, grew 700% year on year for the December quarter.

In terms of average utilisation by the users, which includes the ability of the company to underwrite users for a larger amount and users having a need of freely availing it, it has also grown from Rs 3,200 to Rs 13,000-Rs 14,000 per user, per month basis.

The credit limit the company is providing currently is 70% of the user’s earnings – this changes every cycle.

KarmaLife is now working to expand its user base beyond delivery workers to include security guards and insurance agents.

The team also has a couple of new products/features in the pipeline, including a longer-term product where the user can get a larger ticket loan (in trial phases). It plans to release a saving/investment product in the next three months.