With 85 SKUs, this D2C brand is a one-stop destination for men’s grooming products 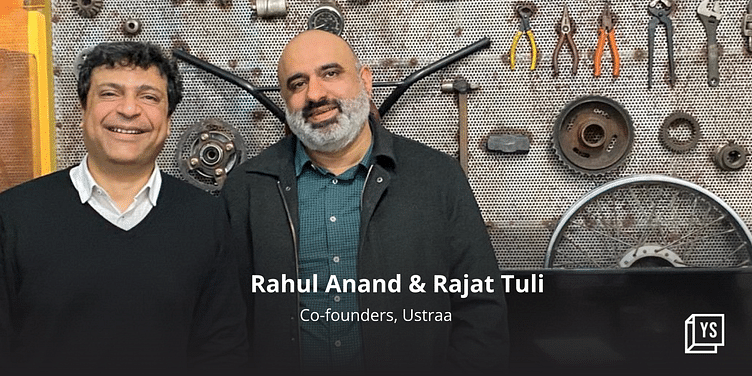 For the longest time, personal care in India was largely around women-centric brands. Men, who wanted to up their grooming game, had few options to choose from.

“For instance, we noticed that despite so many men sporting beards, there were no products available to groom their beards. Men had very limited choices when it came to fragrances and colognes. That is when we decided to venture into men's grooming and launched Ustraa in August 2015,” says Rahul Anand, Co-founder, ﻿Ustraa﻿.

Founded in 2015, the New Delhi-based D2C (direct-to-customer) brand offers a range of skin, beard, haircare, and fragrances. It caters to the male audience in the age group 20-35.

“Our new product development (NPD) team works relentlessly to formulate the products in our in-house lab and are completely free of SLS, parabens, and other harmful chemicals,” Co-founder Rajat Tuli tells YourStory.

Ustraa products, priced from Rs 199 to Rs 1,547, are available on its website and in over 45 marketplaces including ﻿Amazon﻿ and ﻿Flipkart﻿.

Before starting Ustraa, the co-founders had launched Happily Unmarried, a brand that specialised in quirky desi merchandise.

“Our core customers were primarily men. Men’s grooming was one area where we found a need gap and sensed an opportunity. Within the first two months of launching, Ustraa was outselling Happily Unmarried online. At that point, we decided to put Happily Unmarried on the back burner and focus all our energies on Ustraa,” Rajat says.

The co-founder says Ustraa’s competitors differ based on the product category. “In beard care, it is Beardo (acquired by FMCG major Marico), in fine fragrances we compete with imported brands. In face category, brands like Garnier are competition,” Rahul says.

Ustraa products are claimed to be the best sellers with high ratings in men’s grooming categories across marketplaces.

“A testimony to our product quality and customer service is the fact that Ustraa is the highest rated seller on both Amazon (Premium) and Flipkart (Platinum),” adds Rahul.

Ustraa has so far raised Rs 100 crore in funding.

According to the report, “India Men’s Grooming Market Outlook, 2027-28” published by Bonafide Research and Marketing, the market is expected to grow with a CAGR (compound annual growth rate) of more than 11% during the forecast period with more than Rs 31,000 crore market size.

Increasing consciousness amongst male consumers regarding personal wellness and appearance has led to the growth of the market, Rajat says.

“Men will be investing more to look good, and will break the stigmas that were associated with male grooming. Men prefer quick results with minimal effort. Going forward, we will see an increase in quick-action products,” he adds.

The co-founder believes that the men’s grooming market has several opportunities.

“We see massive opportunity in converting men using unisex/female soaps, shampoos, face washes and hair oils into products specially formulated for them. Each of these categories provide a huge opportunity. The soap market itself is around Rs 18000 crore, hair oils and shampoos are in a similar bracket,” adds Rajat.

Apart from India, Ustraa also exports to six countries. “We are steadily growing in Indonesia and looking for entry options in Malaysia,” says Rajat.

Going forward, Ustraa wants to go deeper into the existing categories and add variety to the product range in skincare and fragrance. Its focus will be on increasing its customer base by 2X on websites and 3X on marketplaces.

The market also comes with challenges. “It has not been easy, a lot of startups that launched with us have had to change their strategy or even product mix midway. A few have exited the category completely. We feel all the hard work that we put in the last few years will start showing results now. Men’s grooming is close to the tipping point and according to us 2023 will be the breakout year,” the co-founder says.

Postgraduates in Marketing and Communication from MICA, both Rahul and Rajat have 20+ experience in their field. Rahul worked with J. Walter Thompson and managed clients like Hero Cycles and Monte Carlo. Rajat worked with Mudra and handled clients like Samsung, Lays, and Eveready among others.

Ustraa has a team of 200 employees pan India and over 400 brand promoters.