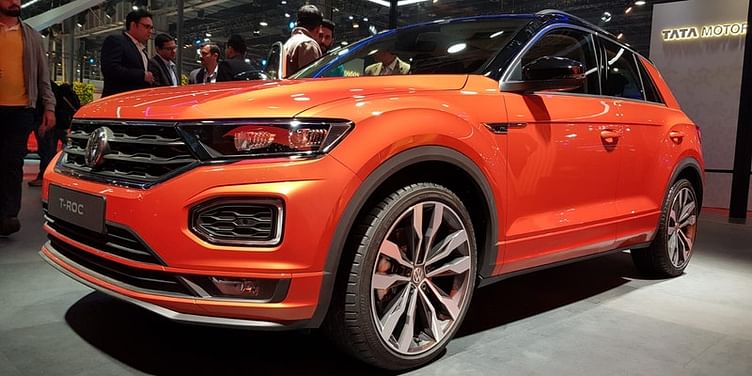 German car major Volkswagen is moving towards an all-SUV line-up in India, and is displaying three new cars at the ongoing Indian Auto Expo 2020.

German carmaker Volkswagen is gearing up to take on India’s ever-challenging passenger vehicle market with renewed vigour. After its operations were merged with Skoda in October 2019, the company has now showcased several new cars at the ongoing Auto Expo 2020.

These include a brand new Taigun SUV, based on the MQB AO IN platform, and designed specifically for the Indian market.

Here’s all you need to know about Volkswagen’s stall from Auto Expo 2020.

The Taigun SUV concept by Volkswagen was shown at Auto Expo 2020, with the German carmaker taking up the challenge in the ultra-competitive, midsize SUV space. However, what has been displayed at the Expo is only the lightly veiled version of the actual model for sale. We expect the production version to be launched in the second half of 2021.

The design aspect has also been moulded, keeping the Indian market in mind. The bonnet has been given an angular look, and chrome has been used in the grille and bumper. The LED tail lamp has been clamped with an LED light bar. However, what makes it a signature Volkswagen are the neat and clean lines.

It offers a multi-layered dashboard that holds the eight-inch touchscreen infotainment system and aligns the all-digital instrument cluster.

In terms of safety features, the new Taigun will be loaded with all the bells and whistles, including multiple airbags, electronic driving aides, and strong structural integrity. We would not be surprised if the new Taigun also scores a five-star NCAP rating like the Mahindra XUV 300 and Tata Nexon.

The Taigun is configured with a 1.5 litre, turbo petrol engine (producing 130 PS of power) which comes with the cylinder deactivation. Other engine options may include a 150 PS 1.5L TSI-Evo petrol and a 115 PS 1.0L TSI petrol engine. There is no diesel variant, but the makers are considering a CNG option in the future.

Another debutant at the Expo is Volkswagen I.D Crozz II, which previews the production version of VW ID.4 set to be launched in India by 2021. The I.D Crozz II, showcased at the 2017 Frankfurt Motor Show, is an evolution of the VW I.D. Crozz concept from Auto Shanghai 2017. The ID.4 in production form will be showcased in New York later this year.

Powering these motors is an 83 kWh lithium-ion battery pack, which is positioned under the vehicle floor. Charging to 80 percent using a 150 kW DC fast charger takes less than 30 minutes and the car has a top speed of 180 kmph.

The Volkswagen I.D. Crozz II’s production version, the ID.4, will be brought to India via the CBU (completely built unit) route and will carry a premium price tag.

This Kia Seltos rival is scheduled to launch in India by mid-2020. Volkswagen’s T-Roc is a part of the SUV offensive planned by the Germans and bookings are now open at Volkswagen dealers.

Built on the MQB platform, the T-Roc is held below the Tiguan in the Volkswagen SUV universe.

The car has broad shoulders, a sloping rear windscreen, large wheel arches, and a contrast roof, which give it a unique look.

The features are also updated - the infotainment system is an eight-inch touchscreen. It also offers automatic climate control and an in-car connectivity suite.

The safety kit is similar to that of the international model, which includes ABS with EBD, rear parking camera, six airbags, lane assist, and adaptive cruise control.

The India model is integrated with a four-cylinder, 1.5 litre, turbo petrol engine. It gives power of 152 PS and 340 Nm of torque. The expected price is to be around Rs 23 lakh.

The product that made a debut is the seven-seat variant of Tiguan SUV: the Tiguan Allspace. The SUV harnesses the power of a 152 PS turbocharged 1.4 litre petrol unit. It also has Active Cylinder Management for enhanced fuel economy along with by a 2.0 litre TSI unit.

On the diesel side, Volkswagen has used the 2.0 litre turbocharged, which develops either 150 PS, 180 PS, or 239 PS. The diesel model’s SCR catalytic converter has a 12-litre AdBlue tank to reduce nitrogen oxide emission.

Volkswagen has also increased the row of seats and added an additional 115 litre of boot space. This means the car has a boot space of 730 litres with the rearmost seats folded flat.

At present, Volkswagen is testing the standard Tiguan in India. This was initially offered with a 179 PS 2.0-litre diesel engine paired with a seven-speed DSG gearbox and all-wheel drive.

The expected price in the Indian market is Rs 30-35 lakh (ex-showroom price).

Auto Expo 2020: From Tucson to Creta - All about Hyundai’s bustling stall