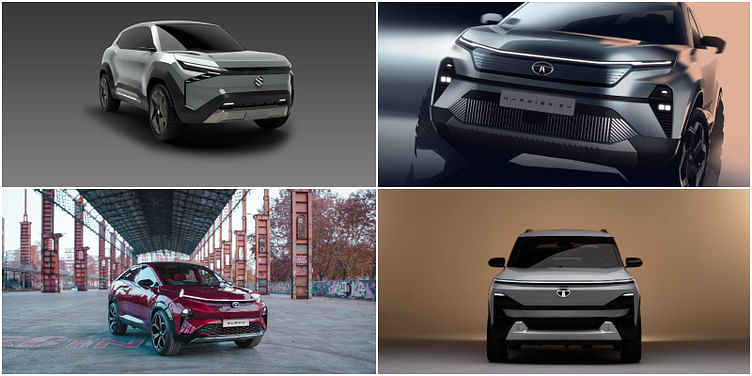 Auto Expo 2023 played host to many upcoming models and pre-production prototypes, from the likes of Maruti Suzuki, Tata Motors, Toyota, and MG Motor.

Despite the absence of major automakers, the 2023 edition of Auto Expo was far from a muted affair. Although we would have loved to see more models at the exhibition, we witnessed some interesting prototypes that could make it to the Indian market in the future.

AutoStory has compiled a list of top highlights from 2023 Auto Expo in the four-wheeler segment that have been major crowd pullers at the biennial auto event.

Maruti Suzuki grabbed plenty of eyeballs with its Baleno-based crossover named Fronx and the five-door version of Jimny, but the company kickstarted its Auto Expo campaign by unveiling the eVX concept. Flaunting a futuristic design, production-spec model of this electric SUV is expected to hit the Indian market by 2025 and it will be based on an all-new dedicated EV platform, jointly developed by Suzuki and Toyota.

Signature SUV-like highlights such as a chunky front bumper, thick claddings on wheel arches and a high ground clearance blend nicely with its crossover-like silhouette. Measuring 4,300mm in length, the electric SUV will carry a battery pack of 60kWh that will return an expected range of up to 550 km.

Tata Motors first unveiled the Curvv concept in its fully electric form in April 2022. At the Auto Expo, the carmaker showcased a more evolved version of the concept that will be powered by an internal combustion engine (ICE). Based on the Gen 2 platform, the ICE derivative of Curvv will be powered by the company’s new range of T-GDi powertrain options.

Slated to launch in 2024, the production version of Curvv will rival the likes of Hyundai Creta, Kia Seltos, Volkswagen Taigun, and Maruti Grand Vitara, to name a few. The most prominent visual highlight of Curvv is its coupe-like profile with sloping roofline.

Apart from retaining the iconic Sierra moniker, Tata Motors has also retained the boxy profile of the OG Sierra from the 1990s. However, the new prototype gets a five-door layout instead of the three-door model seen in the original model and the earlier concept. Based on the same Gen 2 platform as Curvv, Sierra could also be launched in ICE derivatives.

Another exciting model unveiled by Tata Motors at the 2023 Auto Expo was the Harrier EV. Unlike other prototypes, the Harrier EV is more than a concept that is almost production ready. The electric SUV is expected to hit showrooms much earlier than the other concepts since it is underpinned by the existing OMEGA-ARC platform.

Moreover, this iteration of Harrier will feature electric motors on both axles that will lend it all-wheel-drive capabilities. While Tata Motors is tight-lipped about its details, Harrier EV is expected to return a maximum range of 400 km on a single charge. It is likely to hit showrooms by the end of this year.

Kia showcased the EV9 electric SUV concept at the Auto Expo, which is based on the same E-GMP architecture that underpins EV6. However, unlike EV6, EV9 flaunts a boxy silhouette of a traditional SUV thanks to tall pillars, an upright stance and chunky bumpers. It gets Kia’s signature Tiger Face’, but it's been reworked for an electric platform.

The concept has been given a futuristic treatment with integrated dynamic light patterns. Powering this burly SUV is a 77.2 kWh battery that returns a claimed range of 482 km on a single charge. While Kia hasn’t revealed an exact launch timeline for EV9 in India, the electric SUV is expected to enter production for global markets towards the end of 2023.

While Hyundai announced prices of Ioniq 5 for the Indian market, the Korean carmaker also previewed the Ioniq 6 at the 2023 Auto Expo. Also based on the same E-GMP architecture as Ioniq 5, the fully electric sedan features curvy, aerodynamic styling, with a drag coefficient of just 0.21.

As far as the specs are concerned, globally, Ioniq 6 is available with battery options in both dual-motor and single-motor guises. If launched in India, Ioniq 6 could get the larger 77kWH battery pack that returns a WLTP range of 614 km on a single charge.

Although Toyota witnessed a muted gathering at its pavilion as compared to some competitors, it had a few interesting models to showcase. One of them was the BZ4X, the Japanese brand’s first fully electric production model to hit global markets. Based on the e-TNGA EV-specific platform, BZ4X is comparatively longer than RAV4.

BZ4X is available in both single motor and dual motor derivatives drawing power from a 71.4kWh battery pack that delivers an estimated range of 510 km and 460 km on a single charge, respectively. Toyota is unlikely to introduce the BZ4X anytime soon in India since it is currently focusing on developing hybrid powertrains along with Maruti Suzuki.

While everyone was expecting MG Motor to showcase the upcoming entry-level, two-door Air electric car, the carmaker instead chose to display the MG4. The electric hatch sits below the ZS EV in MG’s global portfolio. Based on parent company SAIC’s modular scalable platform, the design of MG4 appears to be inspired by the Cyberster roadster concept.

Globally, MG4 is available with two battery pack options– 51kWh and a larger 64kWh. The former produces 170 hp, while the latter produces 203 hp, whereas torque output on both variants is rated at 250 Nm. MG Motor India is currently evaluating a market launch for MG4 and will be brought to the country either via CBU (completely built unit) or CKD (completely knocked down) route.

MG Motor also showcased the eHS plug-in hybrid at the Auto Expo, which sits above Astor/ZS in the company’s international lineup. Available in two variants globally– Comfort and Luxury, the plug-in hybrid looks uncannily similar to the pre-facelift ZS EV.

Under the hood, it features a 1.5-litre turbo-petrol engine that produces 158 bhp and 250 Nm. The engine works in tandem with an electric motor that generates a combined output of 251 bhp. The car can accelerate from a halt to 100 kmph in 6.9 seconds. There is no confirmation about its launch in India yet.

Among the plethora of models showcased by MG Motor at the 2023 Auto Expo, the carmaker also displayed Euniq 7. The MPV is in its third generation and is powered by a 92kW hydrogen fuel cell stack called PROME P390 with a peak output of 123 bhp. MG Motor claims a maximum range of up to 605 km.